Launched as a prototype barely two months ago, ChatGPT has exploded in popularity. And potential market value.

ChatGPT is a talkative, conversant chatbot, powered by artificial intelligence, trained using huge language data sets. Pose a question or type a statement into its dialog box, and it will reply in what seems a literate, well-constructed and grammatically correct manner.

ChatGPT is an AI-based technology that interacts with users in a seemingly human, conversational way. It was built on large language models and vocabulary data sets; trained using both human moderated and machine learning techniques.

Observers say its capabilities mean the end of the college essay. Or the demise of code-writers. Or the death of journalism. Or the dawn of a new communications era. Or an approximate $30 billion dollar evaluation of the research lab that developed it, a firm known as OpenAI.

A couple of weeks after OpenAI released Chat GPT last November, millions of users were trying out the app. The system hit user capacity rather quickly, and it can still suffer from overuse and blocked access.

Nevertheless, reports indicate OpenAI is in talks that would value the company at around $30 billion. Tech giant Microsoft seems ready to invest $10 billion itself (it already has an investment in OpenAI, having incorporated OpenAI’s digital image package, Dall-E 2, into several of its applications); either scenario makes OpenAI one of the most valuable start-ups on record despite generating little revenue.

And despite limitations: ChatGPT can occasionally generate incorrect information (it sounds authoritative when it does) and it admittedly has limited knowledge about world events since 2021. 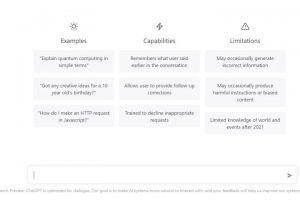 OpenAI co-founder and CEO Sam Altman has acknowledged the shortcomings, noting on Twitter that ChatGPT is “incredibly limited, but good enough at some things to create a misleading impression of greatness.”

He’s described some of the underlying technology, and he’s stated that each conversation on ChatGPT costs OpenAI several U.S. cents.

That’s lead other tech observers, like Tom Goldstein at the University of Maryland’s Department of Computer Science, to calculate that OpenAI is spending about $3 million a month to keep its bot chatting.

To access ChatGPT as a fully featured tool, an account must be created. Unfortunately, many will encounter a busy signal; trying to sign-up, we were told “ChatGPT is currently overloaded. Please check back later.” 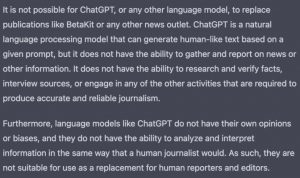 As such, the system does not “think” of original thoughts but uses its database and training to mimic human language, and even to reflect the language used to ask a question in its reply.

And while many say it is virtually impossible for people to detect AI-created content, that’s exactly the challenge other developers have taken up. Tools for detection seems as growing industry: at least one young entrepreneur, a college student, has written an app to detect whether text is written with AI. Edward Tian, a 22-year-old computer science student at Princeton, says it even detects essays written by ChatGPT.

He’s helping raise the bar, if so: A research study conducted at Northwestern University study found that the fake scientific abstracts reviewed did not set off alarms using traditional plagiarism-detection tools. However, Catherine A. Gao and her team did report that more sophisticated AI output detectors could discriminate between real and fake abstracts.

Investors may need such a tool, whether for ChatGPT or other emerging technologies: which is a real and which is a fake investment opportunity?

2023 is Going to Be An Exciting Year for Laptops