If what was shown at CES 2023 earlier this month is any indication, 2023 is going to be a huge year for laptops. From the ultra slim to the high-performance, gaming-specific and totally twistable, there are exciting laptop innovations coming down the pike for the new year and beyond. Here’s a rundown of some of the most notable ones. 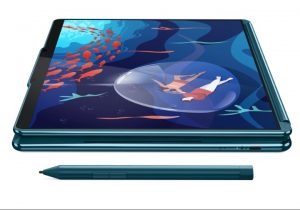 Lenovo had arguably the most talked about laptop at CES 2023 with its Yoga Book 9i, a dual screen laptop with two independent screens that connect via a hinge. Unlike other similar computers that require the purchase of accessories, however, this versatile computer comes with a Bluetooth keyboard, stylus, and stand so you can use it any which way, right out of the box.

Like other 2-in-1s, it can be positioned in traditional laptop, tented, or fold-over tablet mode. But uniquely, you can view an image across both screens to, for example, sit across from a friend and share in the same video conversation, or collaborate with colleagues from across the table. You can also display different content on each screen to take notes on one while watching a lecture on the other, for instance, or surf the web while watching a show. 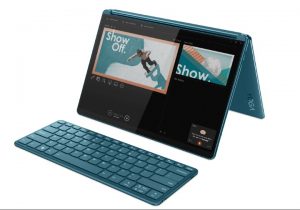 The yoga Book 9i can be positioned in so many different ways, making it great for productivity for office and mobile workers, students, creatives, and even for entertainment. The screens are 13.3 inches each and they boast Dolby Atmos spatial audio to complement the video experience. Starting price is US$2,100 and it will be available sometime this summer.

The standout in LG’s updated Gram line-up is the Ultraslim, which is just 10.99mm thin, similar in size to that of a smartphone or notepad. With a 15.6-inch OLED screen with an anti-glare low reflection (AGLR) coating, it comes equipped with a 13th-gen Intel Core processor. 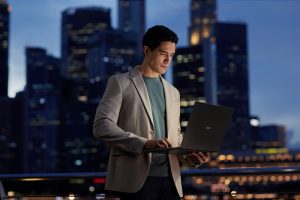 LG also gained attention for its new gram Style, which comes in 14- and 16-inch sizes and boasts an elegant glass design that makes the laptop shine and shift appearance when you look at it from different angles and in different lights. Inside, there’s a hidden haptic touchpad with soft LED backlighting that sees it illuminate upon touch. Along with the sizeable screens and stunning exterior, these laptops come with 13th-Gen Intel Core and Gen4 NVMe SSD, support Thunderbolt 4 and HDMI connectivity, and Dolby Atmos, a new feature this year.

Interestingly, the LG gram 2-in-1 laptops can work with the new +view monitor. The 14- and 16-inch laptops can convert from laptop to tablet mode, as with any 2-in-1. With an aluminum frame, they are also optimized to work with the LG Stylus Pen. Add the +view to the experience for larger, doubled screen real estate. With dual USB-C ports, you can even connect two devices to the +view at the same time.

The computers will launch globally starting next month, arriving first in Korea. 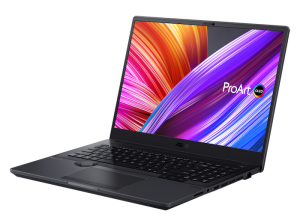 Designed for creative professionals, the Asus ProArt StudioBook 16 has a 16-inch 4K OLED screen and up to a powerful AMD Ryzen 9 5900HX processor along with NVIDIA GeForce RTX 3070 graphics. Use the new Asus Dial for precise fingertip control in apps via rotary control.

Loaded with Windows 11 Pro, you can get up to 4TB storage and up to 64GB memory. With other features like an AI noise canceling mic, military grade durability, webcam shield for privacy, and HDMI 2.1 that supports up to 8K 120Hz video output, this computer is a powerhouse for those who create content.

Sometimes, the most impressive laptop isn’t necessary the one with a million bells and whistles and packed with enough power to take down the grid of an entire neighbourhood. It’s just a downright solid machine that will actually sell to the masses. This is the case with the HP Dragonfly Pro Chromebook, which comes with a 12th Gen Intel Core i5 processor, 16GB memory, and a 256GB solid-state drive. While pricing wasn’t announced, the premium Chromebook comes with four USB-C ports with Thunderbolt support along with Wi-Fi 6, Bluetooth 5.2, and an 8MP webcam, which HP says is the first of that calibre in a clamshell Chromebook. 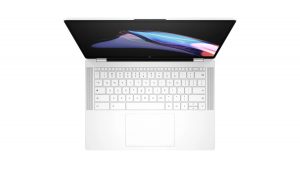 It also has an RGB backlit keyboard and is dubbed as having the “world’s brightest touchscreen display” for a ChromeOS laptop at 1,200 nits with an ambient light sensor. It also boasts a pair of up-firing and down-firing speakers from B&O along with a haptic trackpad.

Ideal for both workers and students, the Chromebook may represent a step-up in this space, joining the likes of Google’s Pixelbook on the top-end of the category. It’s expected to be available sometime in the Spring. 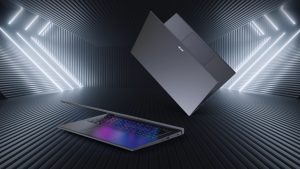 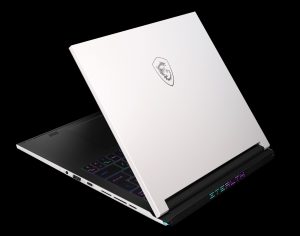 Gamers, in particular, will love the new MSI Stealth 14 Studio laptop, which is powered by 13th Gen Intel Core i7 processors and comes with Windows 11 Pro or Home. With a vapor chamber cooler and magnesium aluminum alloy chassis, it’s built for serious game play as well as work. It’s also ultra-light and slim at 1.7 kg and 19mm thin with two-tone colours so it stands out while you work (or play) on the go. The QHD+ 240Hz display is complemented by a pair each of speakers and woofers, so you’ll get both a stunning visual and audio experience. 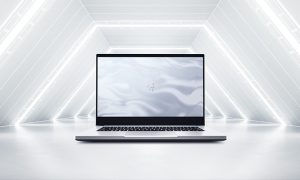 Razer is known for making computer and gaming accessories, but its Razer Blade 18 laptop brings the company into the hardware space as well. Equipped with an 18-inch screen, it includes an Intel 13th gen Core i9 HX processor, 5MP webcam, and six speakers with THX Spatial Audio for keeping up with all your gaming and computing needs. Choose up to 5.5GHz with 24MB of cache and 16GB DDR-5 memory along with a 1TB PCle SSD. With Windows 11 Home, it is set to be available starting January 23.

What is “Career Cushioning?”