Waiting lists for health care services may be a stubborn fact of life in Canada, but for cell phone use?

To see a doctor at Women’s College Hospital in Toronto, in particular to get into a clinic where patients are being diagnosed with environmental sensitivities — including electro-magnetic hypersensitivity (EMS) — can take as long as nine months!

Health issues related to electromagnetic radiation are being treated at a major Toronto hospital.

EMS is the umbrella term used for medical issues related to cell phone use, wireless radiation and other related concepts.

The hospital’s Environmental Health Clinic is also holding educational workshops on the subject of wireless radiation exposure for doctors. It’s partly in the hopes of easing the patient backlog, but it’s also to develop more awareness among treating agents and better care programs for those suffering from exposure to wireless radiation.

The hospital has released a controversial if not progressive statement identifying these symptoms, and labelling them Electro-magnetic Hyper-sensitivity, or “EMS”.

Dr. Riina Bray, the medical director of the hospital’s Environmental Health Clinic, sees the world more dominated by wireless devices and connectivity, and a growing network of micro, radio and extremely low frequency waves through the air. EMS awareness advocates call it ‘electro-smog.’ 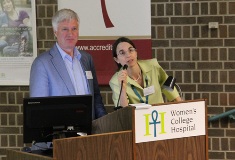 “We need to create more awareness about this condition,” said Dr Bray. “Health-care practitioners need to better understand EMS so they can help their patients prevent and manage their symptoms.  The public needs to know how to protect themselves from the broad range of health impacts electromagnetic fields have on their minds and bodies.”

Last year the World Health Organization placed microwave radiation from wireless Internet and cell phones on an official ‘cancer watch-list’ – although other common substances like coffee also make the list.

Protests against cell phone tower construction or installation are held in many communities in Canada; several schools have removed or are seeking to remove Wi-Fi systems from their facilities, and the Ontario Catholic school teacher’s union has called for a moratorium on further Wi-Fi installations in classrooms.

The first step for patients having symptoms described as related to EMS is to see their family physician. From there, a referral to a specialist is often made, like those working at the Environmental Health Clinic. Dr. Bray and her staff understand sensitivities like EMS and they’re working hard to define and delineate its mechanisms and impact, even as researchers around the world continue to study the effects of exposure to such radiation and how they might impact the human body.

So, too, the clinic staff is working to educate the medical establishment and general public, while managing their patients and growing caseload.

The Hospital recently hosted a workshop on the subject, and it invited physicians, experts and patients to share and discuss ideas related to EMS.

Among the experts invited was Dr. Magda Havas, Associate Professor of Environmental and Resource Studies, at Trent University in Peterborough, ON.  Dr. Havas presented evidence of human physiological responses to electromagnetic exposure.  She also mentioned the guidelines recently released by the Austrian Medical Association on how to diagnose and treat electro smog-related illnesses.

Also at the seminar, Dr. Ray Copes, environmental and occupational health chief for Public Health Ontario, who noted the difficulty of assessing the research on EMS, and the lack of a single, universally accepted definition of the condition.

While electromagnetic radiation is emitted from a variety of sources, among the questions in dispute are whether there is or can be a “safe” level of exposure to non-ionizing radiation; evidence to date suggests some danger, but not conclusively. 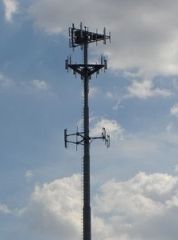 Installation of cell phone towers is being resisted in Canadian communities and court cases.

For some in attendance at the session, the suggestions are much more tangible: participants shared personal stories of ill health and adverse medical reaction, approaches to health care, community collaboration and government action.

“Women’s College Hospital is leading the way by hosting workshops like this,” said Dr. Bray. “Working together is the first step to creating a mutual understanding of electromagnetic hypersensitivity and being able to care for and treat patients in the best way possible.”

The Environmental Health Clinic is a unique multidisciplinary clinic, and the only one of its kind in Ontario. It was established in 1996 by the Ministry of Health and Long-Term Care to be a provincial resource in promoting environmental health, and to improve health care for people with environment-linked conditions such as chronic fatigue syndrome, fibromyalgia and multiple chemical sensitivities.

The Environmental Health Clinic is the clinical part of a joint clinical and research program of Women’s College Hospital and the University of Toronto.