A unique high-tech competition hits the road next month, quite literally, with a three day ‘road trip’ just for talented developers and adventurous entrepreneurs. 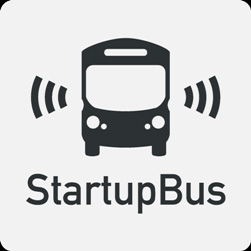 The StartupBus is taking Canadian entrepreneurs and technologists on a business start-up competition.

It’s called StartupBus (North America), and it travels with a unique ‘bus-cubator’ approach to business incubation and technology development.

Selected participants who ride the StartupBus join with other like-minded entrepreneurs and digital practitioners to create and develop their own unique business proposition, product or service – while on the road!

There’s only one bus leaving from Canada this year.

So anyone wishing to hop on board should make contact with the organizers very soon; the StartupBus leaves from Toronto on March 2; it’s heading to Austin, Texas, where four days later, the tech travellers can join in activities at the SXSW multimedia festival and conference.

Before the fun, however, they’re in deep with an intense road trip that sees like-minded groups being formed around a self-decided vision for building and launching a business.

On each bus are resident “conductors” – often previous participants or active community leaders from a city’s tech start-up scene – who help each team and assess their ideas going forward, prior to semi-finals and final judging held at the headquarters of tech company Rackspace, located in San Antonio, TX.

Derina Man is one such conductor – she’s a Canadian environmental consultant by day, but a dedicated bus rider by night – she’s been on several StartupBus tours as both conductor and participant.

“It’s a great way to challenge yourself, and to see just what can be done by groups of ‘crazy, plugged-in’ people,” she said with a laugh. “We all make some great connections.”

The bus riders may not know each other at the start of the trip, but Man says a real team building and bonding experience soon takes place.

“The whole idea is to come up with, at minimum, a viable product idea; so some teams have to adjust their ideas and pivot on their business planning along the way,” Derina described. “There’s serious problem-solving going on, and sometimes people face a real business pain point as their ideas are discussed, challenged and developed.”

Energy, enthusiasm, great ideas and a little infrastructure helps to power the buses as much as more traditional fuel, and Derina added that the chartered buses used are outfitted with tables and washrooms and power and Wi-Fi (when available) to support the participants in their creative activities.

Along the way, the bus also makes stops at local business incubators and technology hubs, where contest participants are introduced to other entrepreneurs, mentors and VCs. 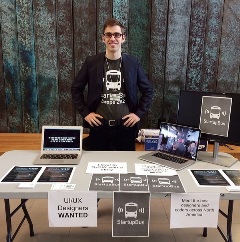 The University of Toronto (Mississauga) seems ready for a road trip; David Wolf shows his support for StartupBus Canada and tech entrepreneurs in this recently submitted Instagram shot.

Derina is among the organizers and alumni from StartupBus who will participate in a special meet-up in Toronto at the Ryerson Digital Media Zone (itself a home to many tech start-ups and entrepreneurs) on Thursday, Feb 13. Paul Vlahov, a co-ordinator and producer with StartupBus and a local tech community enthusiast, will also be there, as will Jamie Roth, another former participant and a co-conductor this year of StartupBus Canada.

Having staged these trips for several years now, in the U.S., Europe, Africa and North America, StartupBus is gathering a lot of media attention and exposure along the way (CNN and Huff Post have covered previous trips; Derina Man says she’ll encourage participants to keep us informed here at WhatsYourTech.ca about this year’s great Canadian bus adventure.)

Competing cities will include innovation hubs like Toronto, San Francisco, Seattle and New York as well as emerging start- up communities from Nashville, Tampa Bay, Guadalajara and Mexico City, among others.

StartupBus is currently accepting and reviewing applications in each region, looking for top notch hackers (coders), hipsters (designers) and hustlers. Each bus will hold up to 30 “Buspreneurs” who break off into teams of three or four to build their company, write code, develop business and marketing plans and discuss corporate structures.

Some sponsorship does help support the trip and related activites, but successful applicants do pay a fee to join in.

After three days on the road, thousands of miles and thousands of creative ideas later, the buses arrive in San Antonio to be judged on March 5 – 6.

Conductors qualify standout teams except the ones from their own bus to avoid favoritism. From a field of 50-60, the best 10-15 teams are chosen for the semi-finals, and half of them make it to the finals, when teams present their concepts, business plans, and prototype products to judges that include well-known entrepreneurs, tech industry icons and successful StartupBus alumni.

The votes are cast based on how innovative the concept is, how usable the product prototype is, and the amount of traction the teams have built up.

Inside the StartupBus, California participants plan the next big tech company, during the 2010 competition. More photos, blog entries and diary reports on Singly.com

Once all votes are tallied the winner is announced.

While there are competition sponsors and corporate partners, Man said that none takes a cut or stake in any business idea developed in the competition; participants do pay a fee to join in the process and make the trip, but the fruits of their labours are for the participants themselves to drive even further.

As examples, AirPair, Instacart, and Branch were all founded by StartupBus Alumni after the competition.  So the trip itself lasts some 72 hours; its impact and results can last a lifetime.