With its two main competitors Rogers and Telus offering an assortment of four android handsets, Bell has finally decided it was time to join the party – We agree! The Samsung Galaxy™ will be offered exclusively by Bell starting at $99.95 with a 3-year contract. For a while there it almost seemed like Bell had forgotten why it had made the expensive switch to HSDPA – so it could tap into the latest and greatest handset offerings. 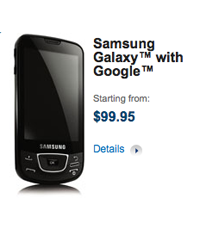 The Galaxy offer’s the basic functionality available on all Android handsets including Google™ applications, access to the 12,000+ third-party application on the Android Market™. The device also includes a flash, a 5 mega-pixel camera that supports video and a microSDHC slot when the 8GB of internal memory is just not enough. The device is also available for $449.95 with no contract.

At only 11.9 mm thick this is the thinnest Android device in the world! When compared side-by-side with its closest rival the HTC Hero, Samsung’s sleek new Galaxy is something of a looker. Not that HTC’s cookie-cutter design sense for the shell sets the bar too high. The Galaxy however uses Android’s stock user interface while the Hero is powered by HTC’s proprietary and quite frankly awesome HTC Sense™ UI.

Most Canadians that are ready to pocket an Android device will undoubtedly end up having to pick between these two great devices. The conclusion is very simple; do you want your phone to be pretty on the outside (Samsung Galaxy™) or pretty on the inside (HTC Hero™)? We won’t judge you either way!

The launch of Samsung Galaxy™ increases the choice of android handsets in Canada to five;

Note: Prices listed above are based on 3-year contracts.