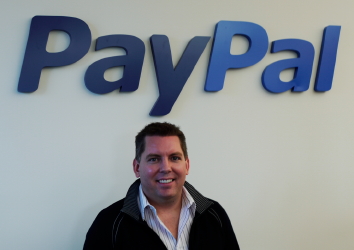 PayPal continues diversify the way e-payments are made. The leading online payment service provider, PayPal has gone beyond catering to e-tailers and eBay traders and has managed to cap 2009 by introducing ways to pay via Twitter, smartphones and has provided the payment backbone for BlackBerry’s new App World store.

“There’s a whole new suite of payment APIs for developers to create and embed PayPal in applications. The first companies to sign up for these new APIs were Twitter and Research in Motion,” Darrell explained.

PayPal X is the developer network that provides programmers with the tools and knowledge necessary for them to enable easy payment within their applications. So far, the response has been tremendous and the results just are starting to surface.

Using the popularity of social networking juggernaut Twitter, TwitPay boosts its functionality by adding a way for people to send and receive money between tweets.

“TwitPay was based on our new open source API’s to allow people to tweet money. It’s a great example of when PayPal opens up its platform it allows developers to embed a payments platform that people trust and is widely used,” Darrell explains.

“Research in Motion used our system when they launched their App World store. There’s nothing more tedious than trying to enter credit card information on a smartphone,” Darrell points out. “With the BlackBerry App store you can use your existing PayPal account through the device.”

“Developers can create all day long but if the can’t monetize it then it hurts innovation. When someone pays for an application in the BlackBerry App World, we enable split payments. This means that developers get paid right away and BlackBerry gets paid right away. It just makes life a lot easier”

This way of doing business certainly challenges the long-winded and cumbersome profit sharing systems that have weighed down third-party developers who often wait for months to receive earnings for their applications.

The BlackBerry App World is currently available to users in Canada, US, the UK, France, Italy, Spain and Australia. It is expected to roll out in other countries in the coming months.

“There are a lot of companies trying to get into mobile payments and we’ve been doing it since 2006. We’ve seen different flavours, back then it was text-to-buy or text-to-give, a WAP (Wireless Application Protocol) interface and now with the wave of smartphones that is happening there is a whole new suite of applications where PayPal can be used,” Darrell reveals.

There are PayPal apps for the iPhone, Google’s Android and for BlackBerry, ensuring that uses of these popular devices can make the most of their PayPal accounts to send and receive money, even on the go.

Darrell also demonstrated the new  person-to-person PayPal Mobile payment  functionthrough SMS from his BlackBerry. The amount was sent and received within three minutes. The receiver gets both a text message and a phone call with a voice recording explaining that they have been sent money. Both send and receive need to have existing PayPal accounts to make use of the service. 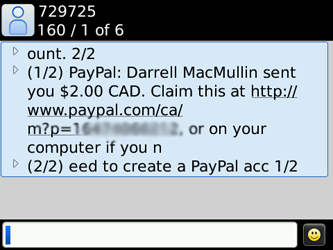 Darrell explains that PayPal Mobile offers a secure and easy way to make payments making use of tools that people already have.”Person to person payments are the fast and easy way to pay someone now that cash and cheques have become a little less common.”