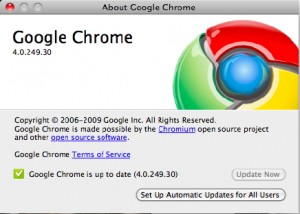 There’s been a lot of Google Chrome news of late. First there was the preview of Google Chrome OS slated for a 2010 debut and today they released the beta of Google Chrome Browser for the Mac and for Linux. Google is notorious for offering Beta versions of their software which are pretty much release versions. GMail was beta for six years before Google upgraded it.

Google knows that in order for its OS to gain mass acceptance, it has to sell the merits of its standalone browser. Pushing Chrome into the mainstream, even if Mac and Linux have a small share of the market.

The Chrome browser has been a personal favourite on Windows- its speed, stability and simplicity has made Apple’s Safari and even the venerable Mozilla Firefox feel bloated and slow.

Granted, these older browsers have more functionality such as plugins and add-ons available to their users which tend to weigh down performance in the long run. Chrome, on the other hand, is a pleasure to use and seems to take less of a toll on the system. Google Chrome on the PC was so good that we found ourselves finding excuses to go online and surf just to play with Chrome

Before its release to Mac and Linux, Google Chrome already owned 3.9% of the world browser market share so its position can only grow from here on.

First impressions of Chrome running on Mac OS X Snow Leopard are that it installs quickly, clones preferences from your previous browser effortlessly and is wicked fast to use. Simple processes like going back to previously viewed websites and refreshing pages are significantly faster. It also handles  tabbed browsing well, just like Safari which is also based on WebKit. You also get used to simply typing search terms on the address bar and running Google searches quickly.

We will be using Google Chrome on OS X extensively for the next week and come back with our findings. Kudos to Google for releasing this early, now we’re feeling the spirit of the season.

Anti-Gift Guide: Gadgets you should avoid for the holidays and beyond