Eleven Engineering, an Edmonton, AB- based semiconductor company, is showing off its new personal wireless standard, called TRiK, at CES.

The basic idea is to stream wireless audio from portable devices to headphones or specially equipped speakers. It can also support a whack of wireless accessories for mobile phones, MP3 players, notebooks and netbooks.

TRiK will compete with other proprietary concepts on the market, and with established standards like Bluetooth. 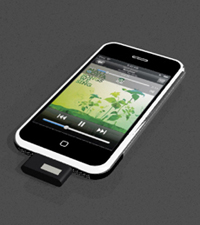 New 'TRiK' for iPhone and iPod

The technology was developed under the code name “Cecille”.

Cecille uses a proprietary spread spectrum, frequency-hopping technology that puts two channels in a 2 Mbps stream. Its homegrown baseband processor can run up to eight threads simultaneously through its eight-stage pipeline. One receiver can send streams to up to four receivers simultaneously.

“This year over a billion personal audio sources will be sold worldwide, and that doesn’t include netbooks,” said John Sobota, CEO of Eleven. “These devices are the constant companions of the user. TRiK allows the music content to be sent wirelessly to headphones, powered speakers, audio receivers, or just about any device our program partners can come up with.”

One scenario goes like this: You’re listening to iPhone streamed Internet radio in the home theatre/living room. Heading for a snack, smaller speakers in the kitchen take over, playing the same music stream. When you go out to the patio to eat, another receiver takes over and the outdoor speakers are used. All the while, your iPhone stays in your pocket!

The company is now offering a turnkey package that includes transmit and receiver chips built into a variety of dongles and external speakers. It is working on a follow on chip set–including a proprietary 2.4 GHz RF device—geared to be embedded in systems starting in 2011.

The dongles include one for the interface on Apple iPods and iPhones with an RF output of 5 milliWatts and a range of at least 10 meters. It’s said to consume 60 mW in transmit mode, about half the power drain of Bluetooth—low enough to run 15 hours on a single AAA battery.

A version for USB will have RF output up to 30 mW, enough to drive range up to 30 meters if used on a desktop PC. A third dongle will support the 3.5 mm audio interface jack.

Someone out there thinks it ‘sounds cool’ – TRiK has been honoured with an Innovations Award for Enabling Technologies at the 2010 CES.