Hate being hassled by telemarketers? Fed up with calls from your former BFF? If so, if it’s worth three bucks a month not to be bothered, read on.

A cool new privacy application is available in Canada, offering control over who calls you. And not just annoying sales pitches at dinnertime. If you don’t want last week’s boyfriend to get through on your phone, so be it. You can block them with PrivacyStar from First Orion.

With the new mobile PrivacyStar app, you can block unwanted callers, including telemarketers, and identify unknown callers using Caller Lookup. An 800-service even identifies callers from 1-800 numbers who can then be blocked – or reported as appropriate.

It’s now available for the BlackBerry – but soon other smartphones and even land lines here can have the same features and functions. 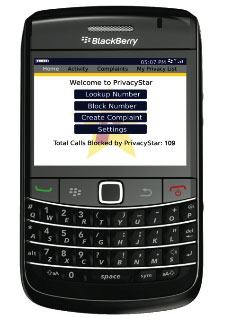 Now, I hear you – some of you are saying, “Hey isn’t that the government’s job?  Don’t we have an official Do Not Call list?” (We do, and I’m registered already – and yeah, I still get calls I do not want.)

The Canadian government, as have many others around the world, has recently put n place so-called ‘do not call’ or DNC list. And at great expense.

But there are well-known – and some not well-known – exceptions or loop holes that have truly undermined the purpose and the value of the list.

So PrivacyStar created this app to add ‘muscle’ to the DNC, by making it easy for us to capture the information necessary to make a complaint against potential telemarketing violators.

The app helps identify and locate potential telemarketing violators, by capturing information from unwanted calls or possible violations of the DNC – like date, time, number and identity.

You can then provide this information to law enforcement authorities for investigation.

“Since it launched, more than seven million people registered with Canada’s National Do Not Call List,” said Keith Fotta, CEO of First Orion. “This tells me people want and have an expectation of phone privacy. They want the ability to block unwanted calls, and this software provides them the tools to take control of their phone.”

BlackBerry users can change their privacy preferences right on the device, or through a password-protected personal web portal that syncs with the smartphone. Blocked numbers can be added or removed simply by typing, whether on the BlackBerry or online.

The web portal is fully integrated and synchronized with the device and any change made through either the portal or the device is automatically synched with the other.

In conversation with Fotta and his partner, company president Jeff Stalnaker, some other, well, more personal reasons, to block calls were discussed. As were reasons why some blocked callers should not be reported.

“In my case, I make a regular charitable donation to (a nearby college),” described Stalnaker. “I donate on January 1st, and by January 2nd, they’re calling me asking for more. Well I love them, I want to donate, but I have my limit. So, I can type in their number and stop them from getting through to me, but I will not report them as a violation. That can all be done in the PrivacyStar app.”

In Canada, charitables are among those exempted by the official DNC regulations. Likewise, politicians and newspapers – so any tool to get them to stop those categories making unsolicited calls is probably very welcome.

Fotta says the company’s underlying motto is, “Any phone, any where, any time.”

He sees the first BlackBerry app release as just the first step in a privacy eco-system that covers mobile phones, smartphones, even home phones, and allows user control over who can call and how the list of allowed callers is managed.

iPhone, Android, Symbian and the like of course are being targeted, they confirmed, and apps are expected soon for the various platforms.

But the company is in discussion now, Stalnaker and Fotta comfirmed, with phone carrier companies in Canada and elsewhere, so that the blocking services can be offered for both wired and wireless users.

The app offers simple check-in, check-out boxes to turn on or off many of its features and functions. Typing in phone numbers to be blocked is a breeze, adding or deleting them means hitting a single button push. Data and settings are saved, displayed and adjusted as the user sees fit.

Now, all this data is stored in the First Orion cloud, as it were, on servers owned or operated by First Orion for its Privacy Star service. So jurisdiction and national regulatory environments are key considerations, and it was good to hear the company is aware of the implications of its service and infrastructure.

It is illegal, in many situations, to convey or transport the kind of personal data this service would collect across national boundaries. What’s more, the country where data resides is often the country whose laws apply, not the country of origin.

So when asked about the location of the company servers, Stalnaker – who is well versed in privacy laws and international regulations – was quick to understand the point of the question.

“All the data we collect that is reflective of a country will and must reside in that country,” he said plainly. “We cannot bring that stuff across borders, and we have no intention of doing so.”

The company will offer its services for $2.99 per month. Stalnaker says that’s “All you can drink: an unlimited amount of numbers can be on the list, and you can put names in or take them out anytime. And when you get your next handset, you can transfer over the full account details.”

How do you prevent unwanted calls? Are you on the Canadian DNC list? Do you think three bucks a month is a reasonable alternative?

Will 3D and Internet-connected TV work for you?

10 technologies that should be in every PC but aren’t