Senior executives from Google are heading to MaRS – the punchline is that they are searching the universe for more acquisitions (see Tim’s story on “the company that never sleeps”  here on WhatsYourTech.ca). 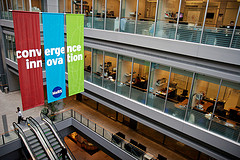 Inside the MaRS Centre in Toronto

The reality is that MaRS is one of Toronto’s top research and development centres, located in the downtown Discovery District, and a great place for tech meetings, conferences and workshops.

So MaRS will play host to the next monthly meeting of MobileMonday Toronto, and if you go, you’ll be able to hear the insights of Alex Nicolaou and Punit Soni of Google, as they discuss the increasing utility and usage of mobile devices.

Meeting organizers say the event will include discussions about developing new mobile web applications, and trends towards a common and universal browser, compatible with every significant mobile device. Such a browser, coupled with increasingly powerful capabilities with the proposed HTML5 specification, can be a great platform for delivering products and solutions to non-technical users – those of us who want their portable devices to “just work” with little or no hassle.

How and where Google fits into this mix today, and where it might go tomorrow, should be the basis of an interesting session with the two Google execs.

Alex Nicolaou joined Google in 2006, shortly after they opened an office in Waterloo, ONo, where he was involved in the development of mobile apps and ChromeOS products as an Engineering Manager. The mobile apps included Gmail, Buzz, and YouTube amongst others, while the ChromeOS effort was focused on building ChromeOS for ARM platforms.

Until 2006, Nicolaou was president and board member of Aruna Inc., a startup developing a unique RDBMS based on text-search algorithms and data structures. Prior to that, Nicolaou was part of LiquiMedia Inc., a startup developing a real time kernel extension and Java Virtual Machine. In 1996, Nicolaou and Jay Steele won the games category of the Java Cup Competition run by Sun Microsystems. In the early 1990’s, Nicolaou was principal investigator for six algorithm patents. He holds an Honours BMath in Computer Science and Combinatorics and Optimization and a MMath in Computer Graphics, both from the University of Waterloo.

Punit Soni is the lead Product Manager responsible for Google’s Mobile Apps effort. He joined Google in 2007 and since then has launched two products in the News/Books domain, and most recently, Google Buzz for mobile. Before Google, he graduated from Wharton with an MBA in finance and entrepreneurial Management. He has had smaller stints at Wharton Ventures and at Intel Capital’s wireless group.

Before completing his MBA, Soni was managing and developing products in Cadence Design Systems and has years of experience in Semiconductor space. Soni has also worked in the ground floor of a very early stage startup which used electronic design algorithms in the space of enterprise software. Besides the business degree, he also has a Bachelors and Masters in Electrical Engineering.

The April meeting of MobileMonday takes place on April 5th at the MaRS facility, located on 101 College Street (Southeast corner of College and University). The event begins at 6:00pm. There is no cost to attend the event, but RSVPs are advised, and as early as possible.

6 ways to create or download free ringtones for your phone