Not sure where or what to eat?

A new iPhone app can help – as long as you know how you feel.

Way more than just a menu listing, the new MoodFood app from Windsor, ON-based start-up company Red Piston will draw on your current emotional frame of mind to select the most appropriate kind of food.

The mobile app also connects with the enormous search database at canpages.ca, and directs you to the closest restaurant with the best food for your mood. 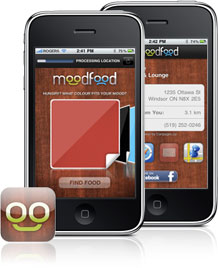 Match Your Mood to Your Food

The app was created in response to Canpages’ recent API contest (announced here at WhatsYourTech.ca), part of the ongoing initiative to develop and deliver new search tools that connect to the huge Canpages.ca online database of over one million business listings.

The MoodFood application – it’s a free download – lets you select a colour most suited to your mood, such as red and its association with energy, excitement and adventure.

The app then leverages the iPhone’s location-awareness functionality to match the colour choice to a list of nearby and contextually relevant restaurants, from the Canpages.ca database. The app’s location awareness capabilities are pretty good over Wi-Fi, but for various reasons, not quite as consistent with data. As such, the app is not available for iPod Touch.

Social media tools like Facebook contribute not only to the app’s functionality, but also to its development process, as one of the three partners at Red Piston told me in a phone conversation about the app and its creation.

“We really wanted to come up with a new idea for this contest,” said Jakub Kotur. We didn’t want to use anything that already existed; it had to be something totally original.

The different angle they came up with was to approach search from a very personal, even psychological angle. That gave them a unique hook into the Canpages business database. 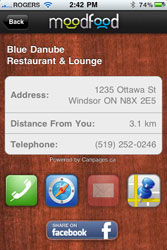 Results from the MoodFood iPhone App

“So we did some basic research braking down colours and psychological moods attributed to them,” described partner Ali Al-Aasm.  “We formulated a chart of mood and colour, then that chart helped us build the logic and application database for the app.

“But before that was done, we did some studies with our Facebook group, where we  tested our theories and asked our followers ‘how this colour and this mood match’, ‘what colour or mood goes with this food, what mood with that food’.”

The crowd-sourcing technique worked well for gathering business intelligence, confirms the third partner, Andy Kale. “We tried to make our own list first, asking ‘is Thai food, like, purple or orange?’ So we had in house sessions to bounce those ideas around, and when we brought it to the Facebook group, many of our ideas were validated and a couple of exceptions were identified.”

(Interesting that a company that’s only officially been in existence for a few months could tap into such resources, but the three guys at Red Piston had worked together before. They are all ex-pats, if you will, from a major ad agency office in Windsor, having lost their jobs recently in the media and ad industry downturn. Pooling their interests, skills and abilities, they formed Red Piston and have now released a number of i-apps.)

The team explains that they considered opening up the MoodFood app so that users might customize it even more, but they discarded the idea early on.

“We didn’t want to ‘guide’ people to a decision,” they described. “The more mystique, the better. It’s a more magical feeling if you don’t know how or why a certain recommendation is made – more fun, at any rate.”

Well, fun is good – but so are the rewards.

And Canpages walks away with a new application that better distributes its content – its million plus bits of business data – so that its clients and customers benefit from better and more relevant searches.

“Their incentive is the cash award,” agrees Canpages’ Vice President – Sales & Marketing, Ryan D’Souza. “We get to develop our ‘innovation network’. We want to distribute our content in any way possible, and we are going to do whatever we can for people in Canada to get to that content, no matter how or where they look.”

With those parameter in mind, D’Souza said the only other contest criteria were ‘cool, useful, and first’. He also confirmed that the app development contest will be repeated, perhaps quarterly, perhaps more often, as the need and opportunity for new mobile search tools grows.

Canpages already uses a lot of those mobile and online tools, and it plays well on multiple platforms. It offers both mobile and online search, and its web listings are supplemented by several rich media tools, include interactive maps and photo listings, and online audio and video clips.

Which is bound to include the iPad any day now, especially if the guys at Red Piston get their way.

“We love Apple stuff, and we’re definitely excited by the iPad. We went across the bridge (to Detroit) to get ours on the first day! Everyone says it’s just a big iPhone, but we think it is so much more than that.”

Hey, their endorsement is not just driven by their mood.

Check out a video of the MoodFood application in action.