First there were rumours that RIM (Research in Motion) was angling to compete with Apple’s iPad by releasing something called “BlackPad” which was said to have a 9.7″ multi-touch screen and an assortment of cameras, Bluetooth connectivity as well as Wi-Fi built in. If RIM is indeed squaring off  against the iPad, it would present a very interesting foil to Apple’s dominance in this space. The RIM tablet is said to be headed to market in November, just in time for the Christmas buying season.

Of all the competing smartphone OS makers, RIM was the last one we’d imagine would go toe-to-toe with Apple. Google, Microsoft, Dell and even HP (who now owns Palm) were always the most likely competitors. Some would argue that BlackBerry still hasn’t gotten the hang of making a consumer-friendly smartphone OS and ecosystem (even if they are the no. 2 global smartphone company in terms of volume). Their OS strategy, developer community, app store integration and range of useful  and affordable apps pales in comparison to what Apple and Google have. So why try and leapfrog directly to the still uncharted tablet space? 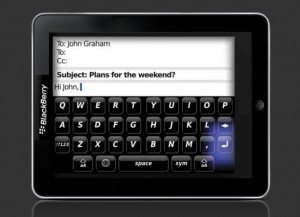 RIM’s own failed  attempts to compete with the iPhone, the now discontinued BlackBerry Storm and BlackBerry Storm II reflect products that looked good on paper, managed to generate a lot of interest and hype but which were hindered by poor multi-touch implementation and kludgy hardware.

We can fault RIM’s moving away  from its core strengths, keyboard devices and messaging, for the failure of these devices.

How would a larger Storm II, possibly running the recently released BlackBerry 6, be any different?

Anyone who has used a BlackBerry knows that the system is deeply menu based with often up to six steps to make a change or access a feature. Compare this with Apple’s iOS and even Google’s Android OS which are designed for touch devices from the ground up and require no more than three taps to access features within apps. It will be very interesting to see how RIM pulls this off, if it is indeed in the works.

Looking back to the start of the year even before the iPad was launched, a number of slates and tablets were visible at CES. Microsoft had a Windows 7 HP slate (killed by HP who will instead develop its WebOS tablets), we saw a number of Android OS devices like the Dell Streak but none of these has really made any impact as we head into the fall.

Meanwhile, Apple’s iPad has sold over 3 million units and is an unparalleled success. Not bad for a device that didn’t really answer a specific market need but which created its own niche in a few months. The onus is now for strong competitors to come forward and try and beat Apple by offering cheaper alternatives with similar functionality.