Canada has the worst cellphone and long distance phone service in the world.

Even with new start-up phone companies now competing in the market, many feel we’re still a couple of area codes behind the rest of the world, in terms of choices, costs and contracts.

There’s no doubt we have been through a big hurt in this country, as far as phones go.

But it may soon turn out that Canada has the best phone service in the world – not the worst!

That’s if John Stix and the gang at Cambridge, ON-based Fibernetics have their way.

They have already developed and delivered a completely free PC alternative to the residential phone line, and they are also teasing to a new smartphone-based service that will soon enable free local and long distance calls to numerous cities in Canada.

The company has developed a cool little app, currently available for download to PCs and Macs, offering real benefits over other kinds of VoIP (voice over Internet protocol) applications.

The app turns any compatible computer into a phone – one with a real seven-digit phone number.  That’s right – you get a real phone number, not just a nickname on a closed or proprietary VoIP network.

So, you can dial out and make local calls just like with any other phone, but even better, long distance calls (to a list of designated Canadian cities, right now) are free!

Of course, your friends or family can call you on your new number, no matter where in the world they happen to be. And because the app can travel with you, with an Internet connection you can make ‘local’ calls from anywhere in the world!

No matter if you’re sipping coffee at a café in Paris, backpacking through Europe, visiting family in Victoria, BC or unwinding on the beach in Grand Bend, ON, you can receive and make calls from your laptop or netbook with the clarity and ease of a home phone line.

The app also comes with phone features like voicemail services, call logging tools, remote follow-me capabilities, and other services. (You can dial 411 for information, for example, but note that VoIP 911 is a little different, because the exact geo-location of a VoIP enabled device is not easily determined. Users can be expected to provide address details or somehow leave updated word about their location to take full advantage of emergency services.)

“What we’re aiming to do is take the ‘home’ out of ‘home phone line’ by offering a free service that will allow users to keep in touch while remaining mobile and flexible,” says Fibernetics co-founder and Chief Marketing Officer John Stix.

They’re also aiming to have a big impact on the cellphone industry – maybe even to rub some long established players in that market the wrong way!

“Yes, we like to be very aggressive and slightly disruptive,” Stix agrees. “It’s the way things are going, and we wanna be first!”

I know, I know – some of you are saying, ‘Wait, I have Skype. I can make VoIP calls. They’re first!”

Yes, last September, Skype announced its phone app for iPhone and iPod Touch in Canada, picking up on its popular PC-based service. Sure, it’s a handy app, but while Skype to Skype calls are free, there is a cost for calls to landlines or mobile numbers.

So earlier this summer, Fibernetics set out to do what services like Skype and Vonage have as yet been unable to do – provide a completely free, mobile alternative to the residential phone line. 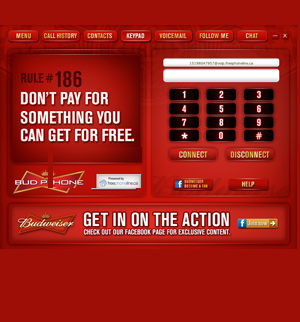 Fibernetics did so through the facilities of its subsidiary, freephoneline.ca, and a major corporate supporter, Budweiser beer (more on the sponsorship angle later).

So, the Bud Phone app is available, and I downloaded it over the weekend to check it out.

The app itself is pretty small, and it quickly downloaded and launched.

The sign-up and registration process is pretty straightforward – but you do need to give a real e-mail address and an existing real Canadian phone number to get through the registration process. A personal sign-up code is emailed to you, and an auto-dialer calls your existing number to confirm and retrieve your code.

Once that little exchange is done, you are registered, your app is ready and you’re assigned your new phoned number, so can start calling friends both near and far.

My first call was from my laptop to my landline – just so I could check the functionality and assess the sound quality.

All was good, so my next call was to a buddy in Victoria, BC. A slight delay or echo was noticeable, but nothing that could stop our lengthy chat and catch up session – hey, it’s free and I hadn’t spoken to him in a while!

Next, of course, it was a call to family – having thought long and hard about whether or not to give them my new number!!! Shhh!

Explaining to them how I was calling was not that easy – ‘Yes, I called you, but I do not have a phone in my hand, Ma!  I’m sitting in my comfy chair, talking to my laptop (and its built-in mic) and yes, I can hear you fine (through the built-in computer speakers)!’

Now, I have not cancelled my existing landline contract – yet, but when on the road, with my laptop in tow, I feel this new phone number and free service is just fine for my needs.

Too Good to Be True?

All right, what’s the catch?

How can a company do this? Not only hand out real phone numbers, but do so for free?

Fibernetics, first of all, is what is known as a CLEC – a competitive local exchange carrier. Fancy name for a phone company, but in Canada, it means that first of all, the company is licensed by our federal telecom regular, the CRTC (Canadian Radio-television and Telecommunications Commission).

It also means that the company can offer a complete phone service for residential and business customers, and that it can assign new phone numbers from a bank of literally thousands it gets assigned, from various areas codes, as a license holder.  Stix noted that a company like Vonage, for example, which is not a CLEC, actually gets its facilities through companies like Fibernetics.

So, procedurally and technically, the company behind this app can do things that other telephony providers may not be able to – based on the condition of the company’s operating license.

But from a marketing and consumer point of view, the free app idea is not quite complete without the partnership of a major corporate sponsor.

Let’s face it – it almost sounds too good to be true. Free phone calling?!? And from a company that most likely, you’ve never heard of!?! Downright suspicious!!!

Stix knew he had to partner with a recognizable and reliable brand, one that had already established its own credibility in the marketplace, but still wanted to offer its customers even more value and engagement.

Enter Labatt, the powerful brewery and company behind the Bud line-up of beers. The Bud Phone was a perfect value-add for the company – hey, how about a free phone with your beer?

Labatt is already social media savvy, having established its own Facebook page sometime ago, and counting hundreds of thousands of online friends as a result. All those friends – and their friends – will of course be encouraged to sign up for the app.

And that younger, hipper media-savvy audience that is big-time into wireless mobility and telephony – and probably fairly fond of beer, too – is an excellent target community to engage and attract with the new app.

Labatt gets a growing community of interest, thankful for their new phone service and willing to buy a beer or look at an occasionally beer ad in return.

Fibernetics gets to demonstrate that it can pull off a cool technical feat like free phone calling – and then possibly upsell the users to its other services – like Internet service or small business telephony.

So Fibernetics now has a good beverage partner for its PC app, and Labatt will be the exclusive partner in that market segment.

But, says Stix, he can find partners in other market niches – like broadcasting, for example!  Toronto’s Z103 rock radio is another seemingly perfect partner, based on the target audience demographics, so watch for the Z Phone download very soon!

And while he could not at this time name the up-and-coming smartphone app partner, he assured me it was a “very large corporation in Canada” that would help him bring the app to market very soon.

Brushing aside my guessing game (hmm, would another telco actually partner on such a thing?  What about big computer company, one without its own phone solutions?)

Hey, there are some 23 million cellphone users in Canada – room for growth, for sure.

Stix was willing and proud to proclaim that over 20 percent of the people who have signed up for the free app has subsequently purchased additional services as a result – not a bad return on his investment.

And, he noted, on the first day the Bud App was available, over 500 people signed up!

How do you make phone calls – free or otherwise?

Are you willing to trade your e-mail address and a few moments reading sponsor ads for a free phone service?