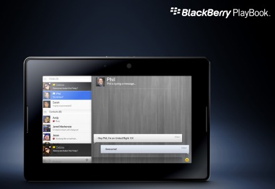 It is called the PlayBook and it is RIM’s new 7-inch tablet which features a  1GHz dual-core processor and integrates with user’s existing BlackBerry accounts. The PlayBook can handle Flash 10.1 as well as HTML5 web standards as well as Adobe Air integration. Powered by QNX OS that highlights security and stability, the PlayBook is expected to be available in early 2011. 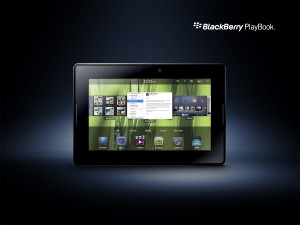 Challenging the iPad in both the consumer and enterprise markets, RIM is risking everything on their PlayBook play. In order to sweeten the deal, the PlayBook has joined up with Adobe and will be able to play the latest version of Flash as well as Adobe Air natively. Adobe and Apple had a very ugly and very public spat over the use of Flash in iOS with Apple citing the emerging HTML5 standard as a more suitable media rich platform.

For the BlackBerry PlayBook to be successful it needs to be widely available to consumers either through mobile carriers or typical retail chains. It needs to be affordable, even more so than the Apple iPad specially considering that it will be a significantly smaller device with a smaller screen.

Aside from the dominant iPad, the BlackBerry PlayBook will get some heavy competition from the Samsung Galaxy Tab as well as a slew of Android powered Dell slates expected to come in 4′ inch, 7′ inch and 10’inch form factors. HP is similarly expected to unleash its own WebOS powered tablets early next year which is shaping up to be a competitive one for companies wanting to gain a foothold in the mobile computing space.

RIM’s CEO Mike Lazaridis took to the stage for the event keynote and began the proceedings by declaring some recent statistics pertinent to the BlackBerry maker.

To date 115 Million BlackBerry smartphones have been sold, there are also over 50 million worldwide subscribers to BlackBerry services. Claiming that BlackBerry is the no. 1 smartphone in North America, Lazaridis also noted that there were 250,000 plus active BlackBerry Enterprise Servers in deployment today.

As far as the popular BBM (BlackBerry Messenger) goes, Lazaridis was pleased to announce that the service has reached 28 million users. He followed up by talking abut the BlackBerry App World, which is RIM’s smartphone app delivery platform which has 35 million users and facilitates over 1.5 million app downloads daily since its inception in 2009. Lazaridis also talked about BlackBerry WebWorks, a new development platform that’s hinged on web technologies such as HTML5 with no Java necessary.

Here are a 5 things we know about the BlackBerry PlayBook

1) QNX is the software behind the tablet is based on UNIX and has been used in cars and imbedded devices. There’s a possibility that this will be adopted as the successor to BlackBerry OS 6.

2) The PlayBook has a dual-core processor and 1Gb of RAM which makes it ideal for multitasking which it does natively. The Apple iPad currently only comes with 256MB of RAM.

3) The PlayBook will “mirror” your current BB device. All your mail, messages, social media and calendars will seamlessly appear on the PlayBook via a Bluetooth connection. It isn’t clear if you can use the PlayBook as a standalone product to access all these features.

4) WebKit browser FTW: Similar to Safari and Google Chrome, the PlayBook’s browser will be touch-based WebKit, which is the fastest, and most standards compliant browser tech today for mobile devices.

5) Expansion options abound. Unlike the closed iPad system, the PlayBook will sport micro USB, mini HDMI and will support a handful of video formats.

What we still don’t know is the device’s price and availability. Too bad it won’t be out for the Christmas buying season since it is slated for release in “early 2011.”

bookscene.ca defies e-Books and e-Readers and embraces the old-fashioned book

Review: BlackBerry Torch a promising start to something bigger