Hey, thanks to you, the race is getting tighter!

Well, one candidate dropped out, so that’s to be expected., I guess… 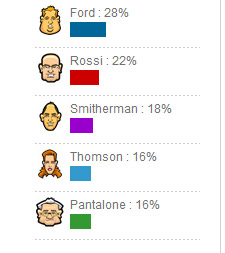 Standings as shown on PlayOneStop.com on October 13

Nevertheless, as the campaign to elect Toronto’s next mayor heads into its final couple of weeks, thousands upon thousands of you ‘cyber-voters’  just can’t wait.

Because you can show your support for your favourite mayoralty candidate now, using the online Mayor Munch game, developed by Toronto-based media company Onestop Media Group.

(What’s Your Tech covered this story when the game first launched; sure, it’s about a fun, tech-enabled game, but it is a serious topic underneath it all. So, to read our initial report, click here…)

For now, though, with less than two weeks remaining in the Mayor Munch gaming poll, Rob Ford is in a tighter race at the top of the leader board – and, apparently, in real life..

(Thomson remains on Onestop’s ballot, although she has officially dropped out of the race and has pledged her support for Smitherman. Her polling information does still appear in the game, but her cartoon avatar now comes with an “I’m with George” speech balloon.)

Vote for the Mayor at Mayor Munch Online

Mayor Munch is accessible online,  and it’s being promoted to over 2 million people using Onestop’s Digital Out-of-Home Networks in the TTC subway system and in residential high-rise buildings across Toronto.   You can also follow the ‘Munchin’ on Twitter.

If you reigister to vote — and then actually do vote — you’re eligible to win a 50 inch HD TV. The poll closes Thursday October 21st 5:01pm.

Is the iPhone 4 worth the upgrade?