As Gadjo says in our Photography Lover’s Gift Guide, holiday season is a time when photos and videos are essential. And as Ted asserts, we’re all looking for Gadgets that are Worth the Money.

Likewise, you’ve probably never been through the seasonal festivities without a few tunes ringing in your head.

So here’s a few gift ideas for the musician in you – or the ones on your holiday shopping list.

But first – with apologies to AC/DC – for those about to plug in, we salute you!

What with all the new electronic gadgets and applicances you are about to receive, what with holiday gift giving and super sales and all, you better stand at attention!

Keep an eye on your hydro usage, and be prepared for possible surges in your electricity consumption – and billing.

It’s a small household device for measuring the electricity consumption of different gadgets or appliances. Even if those other gadgets are turned off, they’re actually still sucking power, and driving up bills. They’re called ‘vampire electronics’ for that reason, and some say up to 40% of power drawn by vampire electronics is wasted in standby mode. 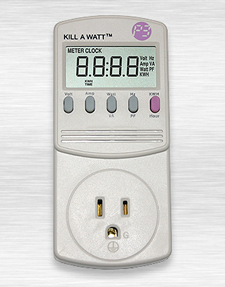 The Kill-a-Watt measures the power draw of individual gadgets or appliances.

The Kill-a-Watt won’t measure your overall hydro pull, put it will provide all sorts of information about the drain from specific devices.

Just plug the device into Kill-a-Watt, and then plug Kill-a-Watt into a wall socket.

It immediately begin to measure and monitor the hydro draw, and it will display information on-screen about a number of parameters, including Volts, Amps, Power (watts) kilowatt hours (kWh) and more, selected by pushing one of several buttons on the face of the unit.

The display shows time lapse and operational duration, too, so you have a good way to check the power usage over time of any particular device.  So, yes, you can see that PVRs and PCs will draw some power, even when they are turned off (that ol’ standby setting is one reason).

Now, to be clear, the Kill-a-Watt does not kill anything! It measures, and clearly shows which gadgets draw the most.

So, any killing you do is up to you – use a power bar to stop the trickle draw of stand-by modes, or unplug that applicance altogether if you’re not using it. Make sure any power saving settings on your PC are set properly.

What with most hydro providers going to time of day billing, it will be advantageous to monitor your power draw, and to try and schedule heavy usage at off hour times.

So you can use Kill-a-Watt to help track and measure that usage. The device itself is battery powered, so it does not draw, but it will ‘turn off’ as soon as you unplug it, losing the current display, so take notes before hand if you need.

Also, the shape of the device unfortunately means that once it is plugged in to a typical dual outlet wall socket, it is actually covering up one of the sockets!

That’s one way to reduce hydro draw, I guess!

The unit is priced at less than $25; you can find out more from the distributor, P3 International.

One note: It’s just a coincidence, but there is a company called KillaWatt, based in Brampton, ON. It’s not the company that makes the Kill-a-Watt domestic device, but it does distribute energy efficient technologies for small and medium sized businesses.

Lately, three different people have said to me, ‘Lee, you rock!’

Well, I do fool around on guitar, keyboards and wind instruments sometimes, but my global concert tour has yet to be scheduled.

But there are some great inspirations out there for budding and established rockers alike, and a couple of gift ideas you can consider for the musician on your list.

Pedal Juice is a great rechargeable battery solution that offers some relief from a gig bag full of 9V batteries. 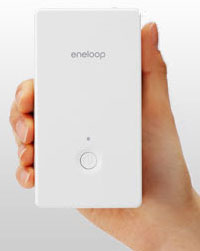 Pedal Juice is a rechargeable power source for musicians

Made by Sanyo, it’s a great way to drive various music devices – like stomp boxes, FX pedals, amps, graphic equalizers and multi-track recorders – almost anything that is typically powered with an AC adapter or a 9V dry cell battery (alkalines and laminated).

And while it’s usually easy to find a plug, it is often just as easy to get nasty hum along the way; the Pedal Juice can eliminate that.

The unit has a built-in 3.7V, 7.35Ah rechargeable Lithium-Ion battery with ‘Eneloop technology’ that puts out a clean, steady direct current via two DC outputs (no AC hum), with a maximum output of 2,000mA from each. It can be recharged hundreds of times, eliminating the waste and cost of disposable nine volts.

You can do some math for your own devices, but Pedal Juice is rated for 50 hours of continuous use for a single 10mA draw device, 20 hours for three digital devices, or more than 25 hours for a 100mA device, like an effects board or digital drum kit.

Two outputs may seem limiting to some pedal pushers out there, but at Steve’s Music in Toronto, they showed me a multi-plug extension cord for nine volt devices, so a chain is not out of the question with Pedal Juice – just check the total draw.

A simple LED display on the Pedal Juice lets you know about remaining power; once you hit the red zone, you have under 30 per cent charge left.

The device recharges in about 3.5 hours.

Pedal Juice is distributed through B&J Music Ltd. and available at leading music retailers nationwide; should be priced under $200.

Sanyo, by the way, has a number of other “eneloop” smart powered devices, anything from smartphones and portable media players to handwarmers. Very seasonal!

And, for all those guitar-playing smartphone users on your gift list, here’s a quick mention of a very handy little device they’re sure to like.

The Guitar Sidekick from Castiv clamps around your iPhone or other mobile device, and connects firmly to the neck (between the nut and the tuning keys) of your guitar, letting you clearly see or interact with one of hundreds of on-screen apps for musicians. 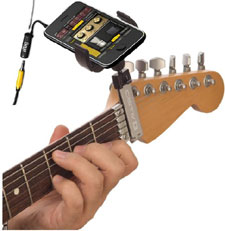 The Guitar sidekick fastens smartphones to the neck of a guitar

The Sidekick has a rotating clamp that can be used to mount any mobile device (even PSPs) in a portrait or landscape view.

So you can easily see the app and play along with video lessons, lyric displays, metronome apps, even tuning and effects processors – like the great AmpliTude iRig app.

Guitarists who use tabs – simplified music notation for guitars – no longer have to be stuck in front of a computer display.

The Guitar Sidekick is compatible with pretty much any acoustic or electric guitar and sells for $30.

Whether it’s your guitar work or someone else’s, the small hockey puck-like unit called Orb is a great way to listen to music, by getting it from your PC to your home stereo.

The Orb MP-1 music player uses your wi-fi network to tap into your PC music (or digital media of any type, for that matter) collection, and it connects to your stereo (or TV, if using the Orb TV unit) with composite RCA cables. I found the set-up and installation very easy – the toughest part was remembering my wi-fi network’s name and password. 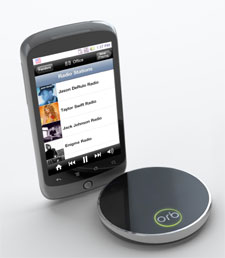 The Orb Music player can be controlled using popular smartphones

What’s great is the Orb software lets you control your music playback with your smartphone. It’s great to be able to sit in the living room or den, in your favourite comfy chair, search all your PC or Mac media folders and then select a tune or video you want remotely. You can use multiple Orb devices in the home, you can load multiple smartphones with the controller software, and you have multiple PCs loaded with the caster software.

Now, beyond your own music, Orb is forming partenrships with other major media suppliers, like Sirius satellite radio, Pandora Internet music service, even iTunes, in order to provide access to those services as well.

Orb has a music, TV and live Internet solution, and the fact it browses the Internet as well as your own computer makes it a great gift idea for less than $100.