Only days after releasing its vaunted Motorola Atrix smartphone, Motorola announced today that it will be launching its XOOM Wi-Fi tablet in Canada, with a release date on April 8, and Telus is confirmed as the exclusive carrier for the device.

The XOOM proved to be popular at the Consumer Electronics Show (CES) in Las Vegas in January when it was first unveiled. It will be a Wi-Fi-only device, and Telus has said it will be selling the tablet at its retail stores starting on April 8. A 3G/4G version of the tablet will also be available in the summer through Telus, which has been touting its Flex Plan data plans as the most ideal for the 3G/4G XOOM. 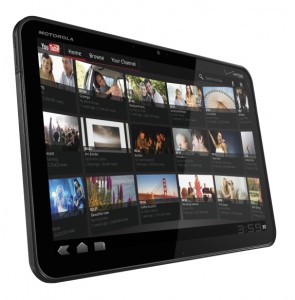 Despite the fact Telus is the exclusive carrier involved, the XOOM will work with any smartphone that can itself be enabled as a mobile Wi-Fi hotspot to share data with the XOOM and other devices.

The specs are the following: The XOOM will run on Android 3.0 (otherwise known as Honeycomb) and have a 10.1” HD display (1280×800) — “a higher resolution and more screen size in a smaller package than the leading competitor” — a veiled shot at Apple’s iPad 2.

The XOOM has been confirmed to have a 1GHz dual-core processor and 1GB of RAM. It will support Flash video, and include Google Maps 5.0 with support for 3D mapping. There will be a 5-megapixel rear-facing camera, plus a 2-megapixel front-facing camera for images and video chats. There is an HDMI output for playback onto televisions and monitors as well.

Battery life is currently being pegged at 10 hours, with a charging time that is “nearly half” of what other competitors can offer — again another veiled shot at both the iPad 2 and Samsung Galaxy Tab.

A couple of accessories have also been announced, and they include a standard dock to prop up the device and connect it to external speakers as the device charges. Then there is a speaker HD dock for sending content directly to a TV or listening to music through the two built-in speakers. The last item is a Bluetooth keyboard designed with Android shortcut keys. It’s expected that the accessories will be available at the same time the XOOM launches.

Motorola Atrix proves its power, but accessories fail to keep up