It’s called “the greatest medical threat of our time”.

So concerned citizens, worried about our increasing exposure to wireless, cellular and microwave technologies, have unveiled a series of initiatives in Canada, designed to increase public awareness and put pressure on politicians to act.

It was strong stuff – and not just from individual activists and community groups, but internationally noted physicians, scientists and researchers, gathered for a series of workshops, interviews and panel presentations held at the Metro Toronto Convention Centre over the weekend.

Both Canadian and international initiatives were unveiled during the event, including a tech savvy ranking of Canadian political parties and the party positions they hold.

I don’t know what all you’ve heard about the health or medical dangers of wireless.

We’ve written about it a little bit here at whatsyourtech, and surely it is not a new topic in many media and academic circles. You can certainly find ‘reputable’ studies that have seemingly contradictory conclusions to offer: that cell phones are fine, that cell phones are deadly.

Now, I don’t carry a cell phone anyway, for a number of reasons not all medical, but I have now pulled the plug on my home router. That’s simple – it’s a small place anyway, and I can easily string a cable to my laptop at any comfortable seating area. But the stuff they showed at least made me want to try and manage if not reduce how much time, and how close I get, with wireless devices large and small.

So the gamma ray gun I’ve been working on has got to go!

Sorry, not to make fun or insult anyone here, but a laugh moment is called for.

ComiCon brought out other scary realities

The setting was so bizarre – the Convention Centre hosted not only the Wi-Fi sessions, part of a larger ‘Total Health’ show, but there was also a ‘ComiCon’ show, so teens in bizarre and bloody costumes were everywhere, and there was a ‘Raising Jesus’ gathering, complete with older men in white robes toting incense and carrying crosses! Really weird scene!

The thought of no cell phone, no Wi-Fi is weird, too. Unimaginable for many, even unconscionable, I know. So do the folks at the conference.

Wireless technology is ubiquitous, and in some cases, quite valuable. A cell phone in an earthquake can be a lifesaver.

But the degree to which we are exposed to wireless tech today, in common everyday and rather undemanding situations, has some people very concerned.

Among them, Dr. Devra Davis, author of Disconnect. Her book has harsh warnings about microwave radiation from cell phones – it comes with the ominous if somewhat unwieldy sub-title: The Truth about Cell Phone Radiation, What the Industry has Done to Hide It, and How to Protect Your Family.

An epidemiologist by training, she’s also a co-recipient with Al Gore of the 2007 Nobel Peace Prize (for her scientific contributions to the Climate Change Panel, which he so often cited).

“I had three of them; they’re really cool things,” she said, agreeing that almost everyone has a cell phone, but quickly adding “Cell phones can do things for us, they can do things to us.”

Saying the risks associated with cell phones and wireless technologies have been grossly underestimated, her own take on the research (her own data and those of others) is that, best case scenario, we are in the middle of a giant and risky public health experiment.

So she always recommends keeping a distance – her iPhone is always at arms length, in a purse or on the desk, and she talks through a cool red retro phone handset, plugged in to the headset jack. She does not hold a cell phone against her head. 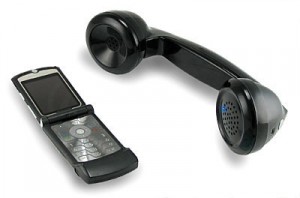 Handsets are one way to keep cell phones at a distance

I asked her how much for the handset – all she would say was, “Too much!” There are Bluetooth enabled and hard wired handsets, such as those from ThinkGeek and Roots.

But use a speaker phone wherever possible, and carry your cell in a backpack or purse (not in your, ahem, pants, not on your belt, not in your bra!) are some of the steps she suggests the rest of us use.

Keep them turned off whenever possible, and keep them out of the hands and away from the heads of youngsters as much as possible. Ban the so-called ‘baby apps’. And get rid of cordless phones around the home altogether.

She’s trying to be positive and practical. Information and awareness is key. So while in Toronto, she announced the launch of the Global Campaign for Safer Cell Phones.

It’s a 12 country initiative she said, with North American, European and South Asian names in the mix. There’s material on YouTube to promote the campaign, sponsored by her non-profit organization, the Enviromental Health Trust.

But if calling cell phones “a public health experiment” is the best case scenario, what’s the worst?

Well, it was Dr. Stephen Sinatra who used that “greatest medical threat” phrase.

He’s seen the threat professionally, and personally. A cardiologist, nutritionist and assistant clinical professor of medicine, he’s confident in saying “Wi-Fi is a cardiac risk factor; Wi-Fi and RF both affect the heart….I can connect the dots.”

He cites case studies – among them, the near death crisis of his own son – in his documentation of the risks from various electro-magnetic and microwave sources.

His son was a Wall St trader. Under pressure, surely, but also surrounded by banks of computers, wireless devices, often a phone on each shoulder. So bombarded by what Sinatra calls “electro-pollution” that it nearly shut his son’s body down.

Treatment, of course, included getting his son out of there, and limiting further exposure. His website has more description of the case, and information about other wireless technology related health issues.

The warnings and the case studies all make perfect sense to Dr. Magda Havas, another participant in the sessions and a long-time researcher into environmental and biological issues, from acid rain to sick building syndrome, and now, electromagnetic pollution.

So she has been here before, in the midst of what she calls a David and Goliath struggle, trying to bring contrarian viewpoints into the mainstream, often against much resistance. This time, Havas said, it’s a bigger Goliath than asbestos or tobacco.

An associate professor at Trent University, she’s been to Ottawa to testify at Parliamentary hearings into the human effects of microwave radiation, following her published studies into risks associated with the 2.4 GHz radio spectrum so favoured by cordless home phones and the like.

So the health and safety concerns connected with wireless technology are a technical, medical and certainly political issue. 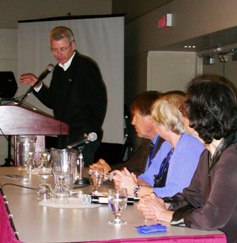 That’s one reason why one of the Wi-Fi sessions was moderated by Toronto City Councillor Adam Vaughn (whose riding the Convention Centre occupies).

A busy politician and father of a teenaged daughter himself, he’s seen first hand the way wireless tech has integrated itself into the lives of young people and professionals alike.

He knows for many people it is just an emerging issue, and he recognized that for many people, trying to understand the implications and remedies is a challenge. So he calls for more civil discourse on the matter, with more engagement from citizens and politicians alike, saying informed discussions are a civil necessity.

Vaughn may get good ratings for his position, but the national parties do not fare so well, according to a citizen’s group called the Wireless Radiation Safety Council.

The Harper Conservatives took home an F for failing to protect children’s health in matters related to wireless tech. The Liberals “are not much better” getting a C, with only Toronto MP Maria Minna cited for a stop the cell phone petition she was involved with in her riding.

“During the Conservative’s tenure Canada’s Parliamentary Standing Committee on Health tried to address the increasing problem of human exposure to microwave radiation from cell phones, cell towers and Wi-Fi in schools,” announced Francois Therrien, a member of the Council. “The Conservatives held a majority on that committee but they failed to act decisively to protect Canadians from this emerging public health disaster,” he said.

The Bloc and the Greens received a B grade, with only the NDP getting an A for effort, if not execution, in its raising of health and safety concerns related to cell phones and wireless gadgets.

The grading is timely, with the election underway and with new tech developments coming almost every day. Groups from across the country are getting active on the issue, and they want to have a big impact going forward.

In addition to the individual’s website linked above, groups like Kawartha Safe Technology, Safe Schools and Citizens for Safe Technology have information on their sites, as well.

Both pro and con sides of the argument are out there, of course.

Are you worried about cellphones and wireless radiation?

Do you think the people who are worried are nuts?  Or ahead of the curve?