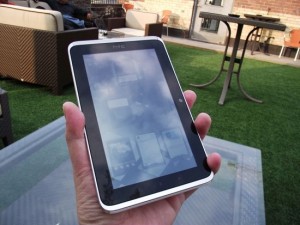 HTC’s first Android tablet, the unibody Flyer, defies a lot of trends in the tablet space. It is smaller, runs on a single-core processor and uses a non-tablet Android OS.

Where does it fit in?

The quick answer is it doesn’t fit in. The HTC Flyer is a unique product in its own niche. The only thing it has in common with anything out there is its 7″ inch screen size (competing with the BlackBerry PlayBook and last year’s Samsung Galaxy Tab). $499 (In the US only, for now), buys you a 1.5 Ghz single-core Snapdragon processor, 16GB of memory (expandable to 32GB via a microSD card), 1 GB of RAM and dual microphones, stereo speakers and dual cameras. Another $80 buys you the Smart Pen, a separate device that takes screenshots when you tap the screen and allows some drawing and outlining features within the HTC Sense overlay. 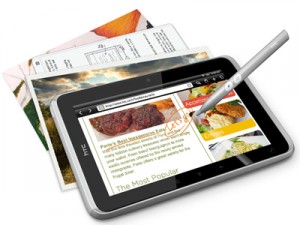 Not having a dual-core processor actually works to the HTC Flyer’s favour since it runs smartphone apps which aren’t compiled to take advantage of dual-core processors. Seeing how dire and barren the app situation is on Google’s tablet-specific OS, Honeycomb, users who flock to the HTC Flyer will actually have far more choices of applications to run on this device than anyone who buys a Motorola XOOM.

Honeycomb, which is Android 3.0, hasn’t had a significant surge in new or compelling applications since its release early this year. The smartphone version of Android, however, is stacked to the rafters with utilities, games and social media apps that work well when blown up to the HTC Flyer’s 7″inch screen.

Comparing it to the Samsung Galaxy Tab 7″ inch, which was launched in September 2010, the Flyer seems speedier and easier to navigate thanks to the HTC Sense overlay. Sense is hands down the best realized overlay for Android because it adds functionality and isn’t as pervasive as offerings from other phone manufacturers. In the case of the HTC Flyer, the functionality is all about the pen.

You can draw, write, highlight and retouch photos with the Smart Pen using HTC Sense which also has deep integration with Evernote for cloud-based note and file storage. The pen on screen experience, is underwhelming and feels odd. It will also annoy users to learn that you can’t use the pen to click on links or navigate around the Flyer outside of the Sense paradigm. Android apps aren’t designed fro stylus input and this isn’t likely to change just for one device from one manufacturer.

In terms of design and build, the HTC Flyer feels like a premium device. Lightweight but resilient thanks to a mostly aluminum unibody structure, it feels rigid. The odd curvy design and the fact that it is heavier and thicker than both the PlayBook and the Samsung Galaxy Tab 7 might be an issue for some users but we didn’t mind it as much. 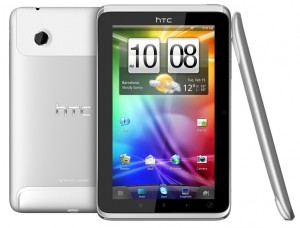 We did mind the  US $499  price (without the pen) for a device that’s not really anywhere near the cutting edge in OS, specs or features. At the end of the day, this is a tablet running a smartphone OS without any guarantee that it will receive an update once the unifying version of Android (Ice Cream Sandwich) makes it to market next year. We feel it has enough processing power to run Honeycomb apps but this might never happen since it looks like anything under the 8.9″ inch screen size will not receive a Honeycomb port in the future.

It is hard to recommend the HTC Flyer unless one can justify the need for the pen input. Not when a little more money can get you a 10″ inch tablet with a boatload of apps and a legitimate mobile OS upgrade path. We see the HTC Flyer fitting into a very niche market for users who value pen-input and portability over having the latest version of software.

Father’s Day – a Dad reflects on his favorite gadgets

Review: Acer’s Iconia Tab A500 plays nice, but not quite iconic