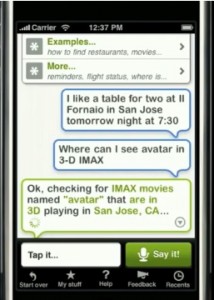 There have been reports lately that Apple is working on a revamped voice control system that may debut in the upcoming iPhone, expected to be unveiled in September.

The new system is reportedly called “Assistant”, and though it’s not entirely clear how it would actually work, rumour has it that it will allow users to verbally request information ranging from movie showings, restaurant locations and navigation instructions.

This would be in addition to the VoiceOver feature currently in the iPhone now, except it’s largely limited to making hands-free calls or choosing a specific song or artist. But it has been known to be buggy, which is why Apple has mentioned before that it is looking to improve that.

When Apple acquired Siri last year, a start-up firm that was developing voice search applications, pundits suggested that the company was looking to integrate the technology into its devices. A deal struck earlier this year with Nuance, one of the most notable voice-recognition developers, has also lent more credence to the notion of better voice-recognition coming to the next iPhone.

There have been no shortage of features rumoured for the next iPhone, though analysts expect the new device to be more of an incremental update than a full-blown upgrade. Time will tell.

How to Find a Safer Cell Phone