The tablet revolution is in full swing and we are looking forward to some fresh new products in the pipeline.

What can be considered the first wave of iPad competitors have come to market and while some have had unique features to offer, one has already dropped off the radar (HP’s TouchPad) while others are now being heavily discounted due to poor sales (HTC Flyer, BlackBerry PlayBook, Motorola Xoom). Here are three new tablets that are sure to raise eyebrows and offer more choice in the marketplace. 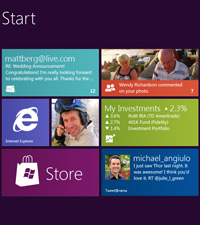 No big surprise but we will see a Windows 8 Tablet sometime in 2012. What is unique about Microsoft’s replacement for the TabletPC is that it will be running a full version of Windows 8 on a device that will feature many of the ports and capabilities of a notebook or desktop PC.

Attendees to Microsoft’s BUILD conference got to take home the Samsung-made Windows 8 tablet which can easily be docked and turned into a desktop and can even support dual monitors. The ability of a Windows 8 tablet to run desktop versions of thousands of programs make it a compelling option for mobile computer users.

Microsoft’s new ‘Metro’ multi-touch interface taken from Windows Phone will undoubtedly be better suited to a tablet form factor. There are two things that worry us about a tabletized version of Windows 8, battery life and pricing. If Microsoft and its hardware partners can address these two issues then Windows 8 on tablets might actually be a great thing. 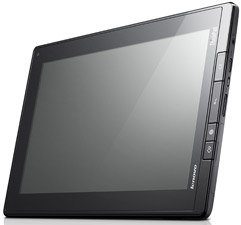 Strangely named because the “ThinkPad” brand originally belonged to a tablet computer built by IBM, the Lenovo ThinkPad Tablet (starting at $500 for the 16GB version) takes the best of Lenovo’s design and feature set and places it in a 10.1-inch Android tablet that business users will love.

Taking the look and feel of the ThinkPad line of notebooks, the Lenovo tablet offers some corporate friendly features such as Computrace which can find the tablet if it is lost or stolen and users can even remotely freeze the device or delete all the data remotely if it can’t be recovered. It also comes with Citrix Receiver which allows the tablet to remotely access PC desktops and use the applications as if they were running natively.

The ThinkPad tablet also comes with a stylus for improved data input and writing and also comes with a variety of accessories focused on business users like external keyboards and cases. Best of all, this tablet is designed for the rough and tumble environment and built to take a beating. 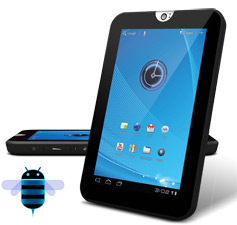 Bucking the trend that 7-inch tablets aren’t as useful or desirable as their larger screened counterparts, Toshiba’s shrunken its 10.1-inch Android tablet (called the Toshiba Thrive in some markets) into a 7-inch pocket rocket.

Running the big-boy version of Android, this small tablet also brings an impressive variety of ports, including Mini USB, Micro HDMI and a Micro SD card slot, giving consumers the ability to easily sync and share their content.

The tablet also includes Toshiba’s exclusive File Manager utility that gives users the power to easily move and manage files. The smaller Toshiba Tablet does not have a user replaceable battery, a major feature found on the 10.1 inch version.

The Toshiba tablet is the first seven-inch tablet in the market that offers a true HD display that when combined with the selection of ports, premium audio, offer a better, more robust and cohesive Android 3.1 Google Honeycomb experience.

Techy way to spice up that costume for Halloween!

Google Buzz packs it in as Google+ takes its place