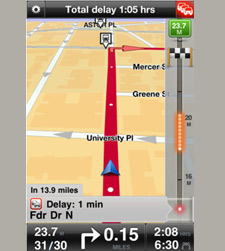 Traditionally, having a GPS unit in your car was for those times when you were going somewhere you weren’t familiar with, but what if you used it on a daily basis to get to the places you commute to most in less time?

This is the scenario TomTom is looking to shape with its new HD Traffic service, a traffic updating platform that differs from the ones typically offered in today’s portable nav units. In those cases, traffic updates usually only apply to main roads and highways, and the data is more historical than anything in real-time.

HD Traffic takes all that and throws in real-time updates that cover every road. What this means is that it can change your route when it sees that your commuting time is about to increase because of congestion, construction or any other stoppage that leads to gridlock. It can do this on the fly, and makes use of side streets to literally drive around congested areas.

HD Traffic is able to do this by pulling in data directly from HD Traffic-enabled devices and any iPhone or iPad using the TomTom app. This comes in a combination of satellite and 3G cellular data on Rogers’ network to reel in historical and real-time data, like location, speed and distance. The only actual GPS unit that has HD Traffic is TomTom’s GO LIVE 1535M. 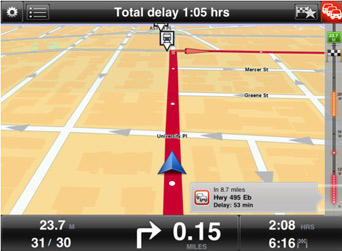 To populate the service, TomTom supplied units to its commercial fleet customers in advance of the launch to collect some data beforehand. So long as your unit is using HD Traffic, everything TomTom pulls from it is anonymous, ensuring privacy.

While it’s still early, the service does show some real promise, especially because it already knows about construction zones that have been in place for months. In fact, it goes as far as pointing out all stoppages, and even pinpoints all the red-light cameras along the way. You can even have it tell you where the cheapest gas station is en route as well.

In the event that HD Traffic does reroute you, you can set it beforehand to either do it automatically or ask permission first. Also, because of the 3G connection, the GO LIVE 1535M also provides access to services, like Yelp, Expedia, TripAdvisor and Google, which can be great as travel aids. 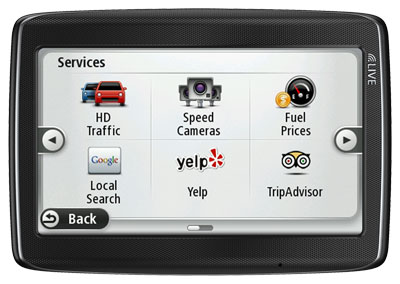 A key drawback here is cost, considering the GO LIVE 1535M is $269.99 with 12 months of HD Traffic service included. To re-up for another 12 months costs $59.99. In addition, because Rogers is involved, HD Traffic won’t work once you leave Canada because it doesn’t support roaming. The TomTom app for iPhone and iPad is $59.99 for maps of all of Canada and the U.S., but the HD Traffic subscription model is the same for the app as well. The good news is that if you buy the app now, you get 12 months of HD Traffic included too.

The main point behind something like HD Traffic is that it’s the most aggressive attempt yet for a navigation company to change the way consumers think about personal GPS on the road. For the most part, GPS maps have usually been meant for navigating through unfamiliar locales, but HD Traffic shifts this the other way and suggests that using a GPS unit should be a daily exercise — especially when you know where you’re going and how you would usually get there.

That essentially makes HD Traffic the daily commuter’s salvation from wasted hours of gridlock, and as TomTom is suggesting in its marketing, a happier life overall. It’s still a bit early to give HD Traffic a true thumbs up, but it is one of the most promising aspects to ever come out for personal navigation.