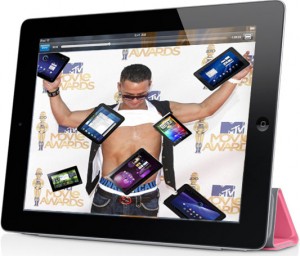 Apple’s iPad continues to dominate the tablet space it had created a year ago despite the waves of competing tablets that hit the market hoping to challenge the leader.

Apple sold an estimated 32 million iPads in its first year while recent reports state that the cumulative number of non-iPad tablets sold for the first 10 months of 2o11 is 1.2 million units.

What is most surprising about this report is that the no. 2 selling tablet of 2011 is HP’s discontinued TouchPad which was sold off at a billion dollar fire sale when HP decided to dump and run from webOS earlier this year.

The TouchPad is a tablet with no foreseeable future. It is a sitting duck. Developers have  all but abandoned webOS and even those brave enough to hack Android into the TouchPad are finding it extremely difficult. Yet this is the no.2 best selling tablet because it was heavily discounted.

Consumers bought the device because it was cheap just like how many are now seeing the BlackBerry PlayBook with new eyes since RIM cleaved off $300 of that tablet’s price. The PlayBook is by far a better deal for the money and we think it has a future although the idea that RIM seems to be liquidating stock by offering it for US $99.00 by offering it to their employees.

A report for All things D stated that, “HP accounted for 17 percent of those tablets, just ahead of Samsung, which had 16 percent of the market, followed by Asus, Motorola and Acer, which each had around a 9 or 10 percent share.”

So, HTC, LG, Asus, Viewsonic, Toshiba, Sony, Dell and others found even less success in this market, yet continue to pour resources into making and marketing second generation products.

How to win a war, define the rules

Apple had the definite first-mover advantage by releasing their product ahead of the competition. A 10 month lead was enough to change people’s perception that the iPad was ‘A Giant iPhone’ to it becoming the hottest and most desired device.

The iPad became so popular that it crossed over and beyond the Apple fanbase to two areas that Apple has been trying hard to conquer with its other products and services for many years now.

The business users and the educational market, two sectors that quickly saw the manageability and long-term benefit of using the device, embraced the iPad as a tool.

The iPad is so successful that it is even taking sales away from the already flagging PC market. Consumers who would have bought notebooks or netbooks go for the iPad instead.

Apple defined the rules of the game. It made the device simple to use so that anyone, from a toddler to senior, could interact with it in a matter of minutes.

None of the competing tablets come close to the simplicity, uniformity of apps, user experience and ease of use of iOS. Apple also locked in the ecosystem of apps, most if which are still $0.99 while apps in competing ecosystems are all over the place in pricing.

Another key ingredient to the iPad’s success is the Apple Retail Store.  Anyone can come in and try out the device and get educated answers from the staff, an experience big box stores simply can’t deliver for each and every competing tablet they sell.

Finally, there’s advertising. Apple spends a fortune on iPad advertising and the adverts tell users what the device can do for them in the simplest terms. They aren’t arguing specs or speed or screen size or even why they are on a faster network which are valid points but mean little to consumers if you don’t tell them what the device can do for them.

How the competition can adjust 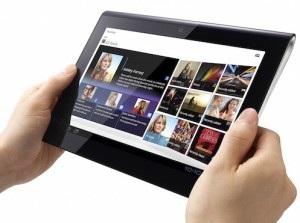 For manufacturers of competing tablets that have sold less than 50,000 units, they are better off following HP’s move and pulling out of the market altogether. The sooner, the better.

That is, unless they have a really unique product which is priced right.

A number of the competing tablets were even more expensive then the iPad, ringing in at a $600 price tag.

That is changing slowly, even radically with companies like RIM willing to trigger fire sales to move inventory and sell products at a loss. A number of manufacturers dropped prices within two months of launch.

Competition needs to be smart, Android tablets are competing against each other  and are very similar in functionality. Variants in size are starting to come out but pricing still isn’t friendly.

Now that consumer have tasted $199 tablets and some eReaders with tablet functionality are starting to scavenge away at the low-end of the market, pricing needs to be revisited now, or eventually later with similar fire sales to what HP and RIM have had to turn to, just to get something back from their investment.

Simplicity in the OS is another factor that weighs in. Many tablets are bought on the warrant of their specs and features but after a few hours consumers realize that the OS is too complicated, doesn’t have compelling enough series of apps and it isn’t fun to use.  To make things worse, some manufacturers are hell bent on littering the tablet experience with their own skins and overlays as well as poorly performing applications.

2012 is around the corner and we’re going to see wave 2 of tablets coming in from all directions. We’re also likely to see what Apple has in store for iPad 3.

Will that device continue to change the game and define the market or will there be a true challenger that can compete and even surpass it by developing its own market.

Whats Your Tech? How will things change in the unpredictable and crazy tablet market for 2012?