Reading a user’s manual is often the last thing you want to do when getting a nice, shiny new gadget.

Like, in the case of many video camcorders, the buzz is that you just point and shoot (uhh, don’t forget to turn the thing on, though), so what’s the big deal? 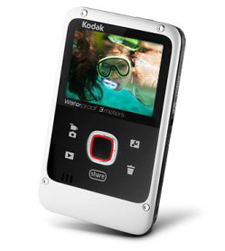 The Kodak PlayFull is a basic video camcorder

Sure, with some models, getting up to speed is really easy – like with the Kodak Playfull, because there are no manual controls to speak of.

But then, there’s 128-plus page manual that comes with the Canon XF300 – along with several operational software downloads from which to choose.

Which camera’s better?  We can judge among a round-up of nice new camcorders by the price, but perhaps more effectively by reading the user manual.

The Kodak Ze2 is certainly for the casual, if not first time user. It is high definition – just – with its 720p record capability. It’s a bare bones camcorder, with mostly automatic settings for exposure and colour balance. It’s called PlayFull for a reason – it’s water-resistant and designed for fun and games video shooting on vacation.

Also for less than $100, there’s still the Flip HD camcorder, also rated for 720p video. It shoots with just one red button push, and while there is some basic control over other camera operations, but like the Ze2, this pocket cam is best suited for basic Web-type video.

Then, there’s the next step up – the $200 JVC Picsio FM2 camcorder comes with a 50 odd page manual, wherein you will learn about setting it for full 1080P – and that you will need to buy extra SDHC cards for video recording capacity as there’s only 128 MB on board.

It has a nice three inch colour touch screen, where other controls are accessed. The Picsio also functions as a still camera and audio only recorder, and it offers electronic image stabilization and USB battery charging.

There’s no optical – and only a 4X digital – zoom on the lens, which is rather restrictive, even for the price.

Unlike the Samsung HMX-H304, also known as the ‘long zoom’ camcorder, with its 30X range on a nice optical grade glass lens. Coupled with a full 1920 X 1080 imager, this camcorder shoots better than most of its class in low light situations.

With only five main buttons on its side, the H304 also uses touch screen accessed menus and a three inch LCD for control over various quality settings and operations. Even with its three inch LCD, this camcorder is a very compact and lightweight unit.

Canon’s VIXIA HF M31 offers a myriad of user-friendly features and functions, and brings extra creative capabilities as a result with its roughly $700 price tag.

For example, there’s the option to record in 24p ‘cinema-like’ or 30p ‘progressive video’ modes. Great image stabilization can be turned on or off, as well. The HF M31 also offers microphone and headphone connections, for much better audio recording fidelity.

There a built-in video light and a built-in flash, to boost recording in low-light situations.

Like most camcorders in this price (user guide page count) range, the camera user one imaging chip (albeit a nice one, a 3.89MP full HD CMOS sensor) to capture HD video footage.

Capturing 3D video is a new and perhaps ‘bleeding edge’ feature in professional and even consumer camcorders, yet it may point the way to the future of motion media.

Being able to capture 3D today means getting a dedicated camcorder that has two lenses or a dedicated optical conversion path. And some ability to capture 5.1 surround sound certainly helps

It uses high quality Leica Dicomar lenses and three CMOS image sensors to do so, and there are multiple user choices for video quality, frame rate, compression scheme and choice of dimension outlined in the manual.

Not in 3D, but nevertheless around that same price is the unique Sony NEX-VG20 handycam; unique in that it uses interchangeable lenses – a feature often found on higher end units only.

The camera camcorder comes with nice zoom lens, but it’s also compatible with other E-mount type lenses, and there’s an adapter for A-mount optics, and that means a whole “eco-system” of lens types and image specifications can be used, as the manual explains.

Besides the video, the camcorder does great audio, with a quad-capsule spatial array microphone for surround sound recording.

There are also settings for full HD Slow & Quick motion recording, like the over- and under-cranking performed in-camera on top film productions.

The camcorder itself is somewhat convertible – the viewfinder detaches to reveal a 3.5” XtraFine LCD screen, while the side grip comes off to expose mounting holes for added operational convenience and placement options

The camera is priced between 5,000 and 6,000 dollars – and so comes with a 4 MB downloadable operating guide (and there’s also an active online User’s Group to help sort out the many capabilities of this unit.

But the best value for the manual may well be from Canon. 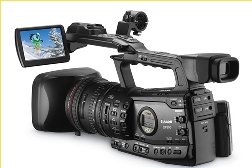 It’s made its first venture into professional solid state video acquisition (that is, not tape based) with the new XF300.

That 128 plus page manual describes how to take advantage of just about anything a pro videographer would want – starting with three built-in high end imagers, full 1920 x 1080 CMOS sensors, and a choice among multiple bit rates (up to 50Mbps).

There is a whack of operating controls, such as the ability to switch frame rates, video resolutions and data bit rates on the fly; as well as full image customization tools (which you really should read up on, maybe even before thinking about purchasing it). 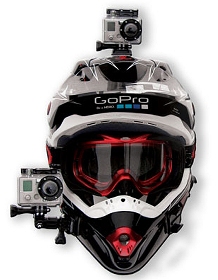 HD recording from a bike, motorcycle, or other vehicle.

Finally, perhaps a user’s manual is needed here for the camcorder – if not the parachute, hang glider or motorcycle you will use when using it.

It is the $300 GoPro HD HERO2 camera, mounted on a high impact helmet in order to capture video that’s really on the fly.

The 1080p HD video and 11 megapixel still photo capable point of view camera not only captures video, it will be able to stream video using GoPro’s new Wi-Fi BacPac, Wi-Fi Remote and GoPro App for remote control and llive streaming.

The camcorder comes with tools for video editing and manipulation, as well as image enhancement software, so you may have to do some reading in unusual situations, while capturing fast action sports and high impact activities.

How to take your small business online – slowly but surely