Smartphones, already smarter than most people expected, are starting to take on their most critical new task yet: the ability to be used for payment. 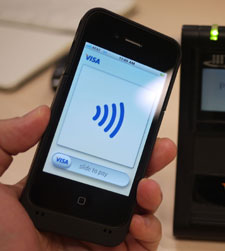 The ability to simply swipe-and-go at the grocery store or at the gas bar would be extremely convenient especially for people who are already averse to carrying cash.

Best of all, a smartphone can theoretically replace any number of debit and credit cards, they are already carrying putting all that purchasing power in one device.

The emergence of Near Field Communication chips

The idea isn’t new, Nokia pioneered a project with Citibank Singapore and Visa began developing the Citi M1 mobile Visa PayWave system in 2009, allowing the mobile phone can also double up as a credit card.

A number of phone manufacturers, most notably Samsung in its Nexus S Android phone and RIM with its BlackBerry 9900 are now integrating Near Field Communication (NFC) chips to give their smartphones the ability to communicate with other devices as well as payment terminals.

About 35 million phones with NFC capabilities were sold in 2011, and experts are predicting that 2012 will be a big year for mobile payments.

The NFC (Near Field Communications) chips, which were co-invented by NXP Semiconductors and Sony in 2002, can make a credit card payment or serve as keycard or ID card.

NFC devices can read NFC tags on a museum or retail display to get more information or an audio or video presentation. NFC can also share contacts, photos, songs, applications, or videos as well pair Bluetooth devices like those hands-free speakers installed in cars.

Personal security and fears of identity theft, an already pervasive concern, takes on a whole new level when it comes to mobile payments and ewallets. The argument that thieves only need to secure your smartphone to get all your personal information and access to your accounts is a viable one.

While smartphones are now easily traceable (via GPS and 3G) and can be remotely-wiped if stolen, there’s still a chance that adoption of mobile payments may be hindered by the perception that they aren’t safe.
This is a challenge and possibly a billion dollar business opportunity for banks, security firms and handset makers themselves to figure out. Motorola’s Atrix 4G smartphone already features a fingerprint reader, which could be one way to go about it.

The promise of secure and easy smartphone payments is definitely compelling and could prove that smartphones are truly smart and useful multifunctional devices. 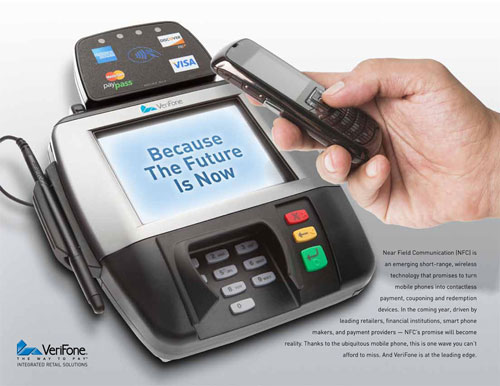 Near Field Communications allows smartphones to communicate with other devices, including payment terminals.