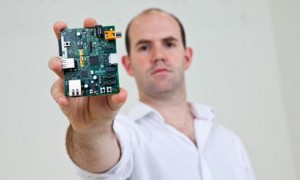 Developed in by the Raspberry Pi Foundation, the initial  run of PCs were released in two versions, priced at US$25 and $35. The Foundation started accepting orders for the $35 model on 29 February 2012 but were soon overwhelmed with orders.

Click on any image for a larger version. Click on any enlarged image to see another. Close the gallery by using the link at bottom right.

The Raspberry Pi is intended to stimulate the teaching of basic computer science in schools but a number of techies just couldn’t pass up a cheap micro-PC to play with.

There was so much demand that the sites selling the PCs had to cease operations because supplies quickly ran out.

What is interesting is how the designers and engineers managed to fit an entire PC into s tiny board.

The diagram on the right shows how the RAM, CPU and GPU all fit on the same area and the largest part of the whole Raspberry Pi PC is the Ethernet cable.

“We are launching with Model Bs as there has been a much larger demand for them from the community. This first launch is aimed at software and hardware enthusiasts, makers, teachers and others who want to build exciting things with the Raspberry Pi before the official educational launch, which will happen later in 2012,” says the Foundation on their website.

The Raspberry Pi opens up a world of possibilities for low cost and miniature computing solutions. In developing countries where PCs are a luxury and extremely expensive, a solution like the Raspberry Pi can make it possible for most students to have a low cost, low-powered PC. It is cheap enough that you can replace the whole thing if it is faulty.

Of course the device needs a keyboard, mouse and monitor and will run specialized software but I am convinced that such a machine should be able to run some popular Linux distros just fine. Running Windows on this computer will be a challenge given Microsoft still hasn’t released the OS for ARM processors and the licensing fees will cost four times the price of the Raspberry Pi.

The Raspberry Pi is also small enough to fit as a controller for various embedded computing applications for vehicles, military drones, production machinery and even retail checkout terminals. For something this tiny and capable, the possibilities are wide open.