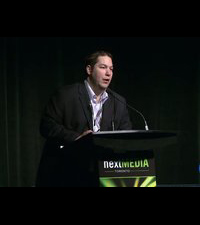 Pro rated, we have among the most Internet users of any country, and we lead the world in Internet engagement, in the sense that we spend some 45 hours per month online.

Video viewing here is up a whopping 58 per cent year over year, with YouTube content representing almost one of every two videos we watch online.

The stats are from comScore, one of the world’s leading audience measurement companies, and contained in its 2012 Canada Digital Future in Focus report.

The annual survey looks at the prevailing trends in general Web usage and demographics — social media, online video, digital advertising, mobile and search are seen as defining the current Canadian marketplace — and it provides insight into what these trends mean for the year ahead.

The report comes as the country is embroiled in a controversy over proposed online surveillance and ‘Net Neutrality laws that consumer advocates say could stifle online activity and development.

What’s more, the country’s broadcast and telecom regulator is still trying to determine the best billing and pricing models for Internet service here, pitting the smaller independent ISPs against the larger wholesale providers in terms of usage based or capacity based service.

But despite the challenges and perceived slights, Canadians are embracing the ‘Net for all it – and they – is worth:

“The digital media industry in Canada is evolving in extraordinary ways, largely driven by today’s multi-platform consumer engaging with content across a variety of media,” said Bryan Segal, vice president, comScore Canada. “2012 is poised to be a defining year for digital as consumers grow their engagement with social, video, mobile and other emerging media. As Canadian businesses shift more of their ad dollars and investments online, it is more important than ever to understand the key trends being seen across platforms to devise effective marketing strategies and deliver digital ROI.”

Facebook may be nearing the saturation point in Canada, but other social networks’ visitor bases are posting strong growth, including Twitter, LinkedIn and Tumblr. Engagement on many social sites is trending upward, with Facebook driving the large majority of the increase in total minutes and page views for the overall category. 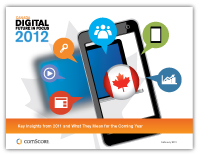 Finally, smartphone penetration has reached 45 per cent with daily mobile content usage growing upwards of 50 per cent in certain key content categories. Interestingly, the embattled Black Berry from RIM is still one of the most popular smartphones in its home and native land.

His presentation at the MaRS Research Centre in Toronto is online as a streaming video.