OK, put down your phone and join in the conversation.

So many of our human contacts are digitally mediated these days, one is often left to wonder just how a face-to-face encounter might actually go – be it personal or professional.

It’s not just people who check their BlackBerries during team business meetings – or heaven forbid on a Friday night dinner date.

The digital life can go out of balance, and according to the results of a new survey with both Canadian and international insight, it can be a drag against workplace productivity and lifestyle satisfactions.

Yes, the workplace in particular can find many benefits in the use and application of new information and communication technologies. Personal connectivity, too, can often be dramatically boosted with new mobile and social tools.

Yet nearly three-quarters of Canada’s employees (73 per cent) report that they are bothered by people who answer their phone or respond to email during business meetings. (That being said, of course, nearly one in six (14 per cent) of respondents indicate they are guilty of the very crime they protest.)

The majority of Canadian workers think answering emails and phone calls during a meeting is a no-no; they prefer more face-to-face interaction in the workplace.

Even outside of meetings, nearly seven in ten (68 per cent) Canadian employees indicated they prefer face-to-face contact over other means of communications, such as telephone or email. In fact more than four out of ten Canadian employees (42 per cent) say they create moments during their day when they ignore contact like phone and e-mail all together.

In other words, they put down their phone and join in the conversation.

“New technologies have definitely changed the way we conduct business, and plays a key role in knowledge sharing,” acknowledges Stacy Parker, Executive Vice President of Marketing for Randstad Canada, which conducted the global survey. “However, companies have to learn to find a good balance between virtual and face-to-face communication in order to create a workplace that is efficient, productive, inspiring and team-oriented.”

When it comes to technology etiquette such as responding to emails and calls during meetings, Parker adds, it all depends on the nature of the meeting, and the environment – just make sure your actions remain professional. 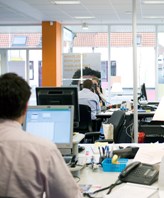 “Even with easier and quicker access to information that new technologies like smartphones, social media, videoconferencing and others provide, people still value face to face interactions. Smartphone’s can have a very appropriate place during a meeting or business setting, especially if using it serves to facilitate or enhance the speed of business,” says Parker. “On the other hand, it can feel like a slight when you are meeting with someone, just to have them pull out their phone and read a text message while you’re in conversation.”

Canadians aren’t alone. Around the globe, results indicate 75 per cent of employees feel it is not appropriate to answer a call or respond to email during a business meeting – though 15 to 20 per cent of the respondents admit to still doing this.

The level of acceptance of this practice varies by country. In India and China, 75 per cent think it is wrong to answer a call or email but nearly half of the employees do it anyway. Hungary’s results are similar to Canada, where a high percentage of employees say they are bothered by these actions (89 per cent) but few admit they are guilty of this practice (nine per cent) themselves.

The overall global results for the preference of face-to-face communication are also in line with Canada, as 70 per cent of all employees say they prefer personal contact over phone or email. In Turkey, over 80 per cent report preferring face-to-face contact, while interestingly enough, only 57 per cent of employees from Japan, Norway and Singapore prefer in person communication.

The Randstad Workmonitor is published four times a year; its quantitative study is conducted via an online questionnaire among a population aged 18-65, working a minimum of 24 hours a week in a paid job (not self-employed). The minimal sample size is 400 interviews per country, using Survey Sampling International. Research for the first wave of 2012 was conducted from January 20 to February 14, 2012.

WoW! Women have a ways to go in tech leadership