‘You Do It Without Even Thinking.’ 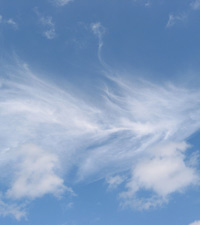 That was the marketing slogan on top of a recent promotional e-mail about new cloud computing services.

Ostensibly, it’s to make us feel good about cloud computing; it happens all the time, cloud advocates say, it’s so easy, you don’t even know it!

The concept of cloud computing has been around for a while now, and yes, many of us use it without knowing.

In fact, according to a recent survey, most consumers are more than a little ‘cloudy’ on just what cloud computing is.

A somewhat astounding 51 % thought inclement weather would interfere with cloud computing, and about the same percentage said they had never used it – both groups are wrong.

At its most basic, the cloud is a service, not a product.

But it is not an amorphous floating mass – it is a collection of computers and servers, routers and switches, all networked together, all providing very specific data processing, management and storage services. The cloud might hold your e-mails, photos and music collection or it might store crucial corporate documents and public archives – hence, the phrase ‘big data’ is often used when talking about the cloud.

Users of the cloud can be anyone from individual users to huge institutional client groups; either way, they are being encouraged to use the vast capabilities of the cloud, rather than the limited capacities of their desktop or portable PC.

The cloud is said to provide all the benefits of enterprise-class communications, without the expense and hassle of on-premise solutions.

But in fact, the cloud is made up of many, often private, premises: very physical ‘bricks-and-mortar’ points of contact, and at very specific locations – locations with very identifiable addresses, and street addresses at that, not URLs.

As such, the ‘cloud’ can be seen and mapped, and with more accuracy than a lot of weather forecasts. IXMaps is a Canadian developed website and interactive tool that lets users track the route their data takes when heading into the cloud, or to an intended destination. The IXmaps site and related investigative research is coordinated by Andrew Clement, with the Faculty of Information at the University of Toronto, with co-investigator Nancy Paterson, Faculty of Art, OCAD University. 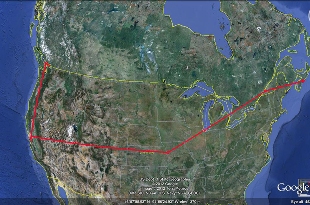 IXMaps traces the route that our data can follow on its way to the ‘cloud’.

Data goes in and out of a number of Internet Exchange Points (IXPs), which are in many cases operated by private companies, on the way to an intended destination. IXPs are physical locations where one Internet Service Provider’s network meets up with another operator’s network.  IXPs pass along the data, based on technical, strategic, business and/or jurisdictional agreements, called peering. Should those agreements be broken for any reason, the cloud could disappear.

If anything, then, the cloud is a series of IXPs – and the Canadian Internet Registration Authority, the organization that manages the .CA Internet domain, says we don’t have enough of them.

So our cloud is too small.

CIRA says there are about 350 IXPs around the world, and some 85 in the U.S. – all integral to the Internet infrastructure – but in Canada, there’s only two.

“This is not acceptable,” said Byron Holland, president and CEO of CIRA, in calling for a national IXP fabric. “This is about improving security, speed and network resilience, while maximizing the amount of traffic that stays within Canada for the benefit of all Canadians.”

It’s about control, in other words. Control of where, how and when our data is transmitted or stored.

And the cloud is undermining that control, and there’s a real risk in the shift away from personal processing and storage and towards uploading data into remote servers ‘in the cloud’, says one of personal computing’s top engineers, Steve Wozniak.

“I really worry about everything going to the cloud,” Wozniak said recently. “I think it’s going to be horrendous. I think there are going to be a lot of horrible problems in the next five years.”

“With the cloud, you don’t own anything. You already signed it away,” he said, noting the legalistic terms of service with a cloud provider that computer users must agree to.

“I want to feel that I own things,” Wozniak said. “A lot of people feel, ‘Oh, everything is really on my computer,’ but I say the more we transfer everything onto the [W]eb, onto the cloud, the less we’re going to have control over it.”

To have any hope for increased control, we surely need more knowledge and awareness about the cloud and how it works.

So, the upcoming International Right To Know Week has its work cut out for it.

As part of the global activities surrounding the call for more open data and Internet operations, Ontario’s Information and Privacy Commissioner, Dr. Ann Cavoukian, will bring together several leading tech experts to discuss ways to strengthen public participation in Internet-related policy decision-making and to raise levels of accountability and transparency.

Looking at the Balance of Power in the Mobile Industry