What keeps friends and family connected, even when they are in different places and different times?

Well, some say love is all you need. Others are looking to somewhat more tangible – digital – ties that bind, and of course social media is one popular way to make and keep such connections.

Tweets and posts are fine in some cases, but face to face is one of the best ways to make and maintain personal connections.

So, in lieu of proximity, a team of Ottawa-based digital, entrepreneurs, developers and artists are taking a dive into the world of social networking and video sharing.

They plan to launch DIVE, a new social platform that will let its users visually connect with friends and family at different times in different places.

The anticipated DIVE mobile app with let you, for example, post a question or comment in the form of a video, and it will let people post answers or replies, also in short video form. This all takes place whether or not people are online at the same time.

The DIVE technology can combine linked or threaded comments into a single file for easier viewing, faster sharing and what the developers hope are longer-lasting relationships.

As the final touches are built into the app’s UI and backend infrastructure, DIVE has released its latest promo video in advance of a product release this year.

Leading the development team is CEO and company co-founder Chelsea O’Connor, who has been using many different forms of media to make her own meaningful connections for over 15 years now.

She’s a graduate of the Canterbury Arts Program, the performing arts and theatre school at Ryerson University in Toronto, and she has performed on stage as a result. She’s also been on screen, as a host of The Reel Cut, a show that spotlights members of the Ottawa Independent Filmmaking Community on Rogers TV, a gig that came about following complementary studies at Algonquin College’s TV Broadcasting Program. 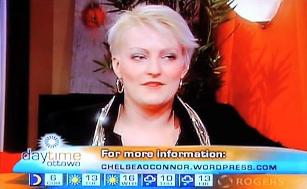 Chelsea O’Connor is no stranger to video, be it on TV or online.

She’s no stranger to digital media and interactive technology either; she’s Online Producer of an interactive website and online playground developed just for kids – Totallyrandom.ca – that is as much about safe social networking for children online as it is for fun.

Even with that comprehensive background, O’Connor has partnered with tech guru Julian White, who is co-founder at DIVE and company CTO.

White says he coded his first computer game when he was just 12 years old: that early passion set the stage for a career in technology that’s now spanned some 20 years. He’s worked with and founded other tech companies (SDL Solutions, DragonRAD among them) while also providing the benefit of his knowledge and experience to other tech entrepreneurs, as President & board member of The Ottawa Network, a not-for-profit member- driven organization that connects entrepreneurs, academics, industry professionals and government agencies in the Ottawa region.

Of course, once DIVE is out, White’s connections will certainly stretch beyond the Ottawa area.

O’Connor, meanwhile, wants those connections to grow for both professional and personal reasons: she says she “loves her friends and family bucket loads”.

With that and the new app, she’ll have it covered. 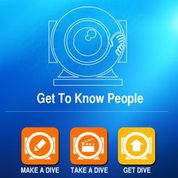 A screen grab shows the home page from the DIVE app

Facebook looks to virtual reality through acquisition of Oculus