‘For the world’s more full of weeping than we can understand.’

Stirring talks and engrossing presentations at ideacity jumped out of today’s headlines, grabbing attendees at the annual thinkfest conference now underway in Toronto, shaking us, making us cry a bit, helping us understand just a little bit more about ourselves, our world.

And that was just a couple of sessions in the middle of a three-day event!

ideacity will be webcast and streams optimized for mobile devices

ideacity is a gathering of great thinkers and great talkers, presented and hosted by Canadian media mogul Moses Znaimer. This year, its 15th, the event is again being staged at Koerner Hall – but for the first time, it’s also being live streamed to the Web and mobile devices.

No matter how or where you encounter a great idea, you know it won’t let go of you: surely, a wonderful kind of imprisonment.

Quite unlike those described by Alan Young, one of the many returning ideacity presenters for this special anniversary event, and one of the first we caught today.

He spoke quite movingly, often angrily, about unjust imprisonment and wrongful conviction. Over the course of his career, as the Canadian lawyer was introduced, Young has never shied away from a difficult case or controversial cause.

So he could speak with first-hand experience of a legal system built to “reach a result” – sometimes any result, no matter the injustice such willfully blind justice can cause.

Or how often – Young ended his short presentation (none at ideacity are long, there are often four or five per hour) with a visual montage of faces and names we all recognize from the news – wrongly convicted of the most hideous crimes, these faces have now been proven to be completely innocent; understandably their faces are tear-stained while our memories are just stained.

(Young works to help the wrongfully convicted establish their innocence and gain their freedom – he asks us to help him, through his organization The Innocence Project.)

To pursue justice, said the next speaker, you must feel the injustice.

Irwin Cotler, like Alan Young, has seen his career driven by such feelings.

Cotler currently sits as a Canadian Member of Parliament, and he stands with some of the world’s most well-known activists in the global struggle for justice, peace and human rights. Nelson Mandela, Anatoly Sharansky, Andrei Sakharov, and more.

Movingly describing the men and their legacies, Cotler spoke without notes, without slides, but with power and conviction and insight about great global struggles – and he brought them all right back home to us with his unflinching motto and rallying call: ‘Live each day in such a way that makes better other people’s lives.’

In the end, of course, that helps us. So we can understand a little more, and weep a little less.

After those two powerful presentations, once could be forgiven for needing a drink – or something, right?

He was jailed several ago after selling millions of dollars worth of marijuana seeds; today, both Marc and Jodie are vocal advocates for legalization. She showed she is a polished presenter, and someone who knows full well justice is now on her side. Husband Marc is due out July 4th – just whose independence will be celebrated that day? – and she noted the irony, if not injustice, found in the growing global and more recently State-side trend towards the very legalization they’ve advocated for, she notes suffered for, all these years.

Be it harvested for medicinal, recreational or other purposes, you can understand how the fact that marijuana can “overgrow the government” brings to the Emery’s and others much satisfaction – tears of joy, perhaps?

ideacity presentations are not structured in a formal sense, but certain common threads often connect one speaker with the next with identifiable themes, or ‘idea hubs’.  I don’t know if it was Loreena’s idea, theirs or mine, but thanks for the tearful, joyful, insightful thread, all you citizens of the ‘city.

And ideacity is not in any way all about technology, but technology is surely everywhere, and ideacity is no different. So grabbing some attention as it wandered through the crowd and then came on stage was a motorized, robotic, TV-like …techno-thing. 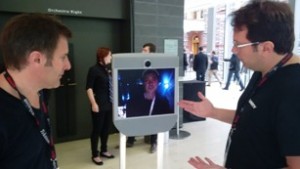 Chatting with the Beam Remote Presence digital device at ideacity in Toronto.

Turns out, the remote-controlled Beam Remote Presence System is on wheels, connected to the Web via Wi-Fi, and it has two-way audio/video capabilities.

Chatting to it – rather, chatting to a person somewhere whose image appears on the screen and whose voice is amplified through speakers – takes some getting used to, but as long as the thing doesn’t just start rolling away, it can be a very convenient way to connect with someone who’s not there.

You get the idea. Or check out the webcast.

ideacity continues and concludes tomorrow, Friday June 20. The webcast continues, and presentation videos will be online after the event.

Backing up your smartphone the most sensible option

Stylus: The accessory that won’t die