We all supplement or augment our view of the physical, real-world environment – through our senses, our upbringing, our education, lifestyle or social status. 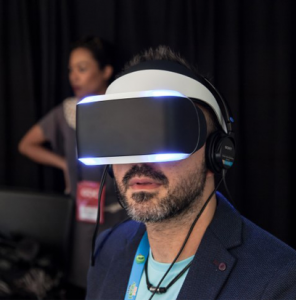 Virtual and augmented realities were open for exploration at the Immersed Conference.

Sometimes we use technology, too.

So when Ray Sharma shared his observation about the future of reality with an enthusiastic group of techno-wizards, product innovators, content creators and self-described gamer geeks, he was preaching to the choir (whether physically or virtually).

Sharma, himself an entrepreneur, technologist and CEO at XMG Studios, an independent mobile and gaming application development company based in Toronto, was among the many industry luminaries to participate in Get Immersed, a unique two-day conference all about augmented reality and immersive technology held in Toronto.

By way of introduction, immersive technology is often used to refer to different technologies or platforms that make the user feel and experience a digital world as though they really are inside it.

That’s virtual reality, and it can make use of technologies like stereoscopic 3D, haptics (touch), sound, and gesture/motion control. Augmented reality uses technology to change the way we experience and interact the world around us.

It often refers to glasses-like technologies that add digital imagery above and beyond what a user would normally see. They often superimpose graphics, text or imagery on top of what is ‘really seen’, adding extra information and context to the view.

And while some form of immersive technology has been around for a while some time, it’s coming into its own nowadays, and the Immersed Conference was held to demonstrate how AR and VR and 3D are the “real deal”.

Several speakers were on hand to explore and describe the creative, technical and business realities of creating future AR-based entertainment experiences, and to provide content makers, technology innovators and professionals with the tools and resources needed to build their businesses and careers in an immersive world.

Among them, John Gaeta, the Academy-Award winning creator who worked the Matrix Trilogy (“bullet time” and “virtual cinematography”), who is Creative Director New Experiences at Lucasfilm; Ian Hunter, Creative Director, VFX Supervisor; Co-Founder, New Deal Studios; and Visual Effects Society (VES) award-winner for his work on The Dark Knight; and Habib Zargarpour, Creative Director, Microsoft Studios, who received the 2014 SIGGRAPH award for Best Use of Real Time Graphics for his work on the game RYSE: Son of Rome. 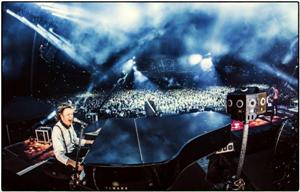 “Nothing is real”, but Sir Paul is immersed in virtual realites created for Android OS and VR glasses.

All that, and The Beatles, too!

Mind you, one of those displays is a rather flimsy-looking mobile headset called Google Cardboard, which was introduced at Google IO early this year, and it’s being used as a promotional tool by companies like Volvo, with its app showing off the interior of its latest SUV.

Immersive content developers (like Jaunt for the McCartney show, New Deal Studios, iZugar Studio, Geneva Films and others at the conference) can work with a number of headsets and devices, including Gear VR when Samsung and Oculus release it next month, and to the more expensive, desktop computer-based Oculus Rift.

More chilling than McCartney could ever be, David Cronenberg is another recent immersive adaptor, and during the conference, the ingredients of the Cronenberg Body/Mind/Change Rift Experience were shared and described by J.Lee Williams and Blair Renaud, founders of Occupied VR, alongside Ana Serrano, the Chief Digital Officer at the Canadian Film Centre, a co producer of the augmented reality game. 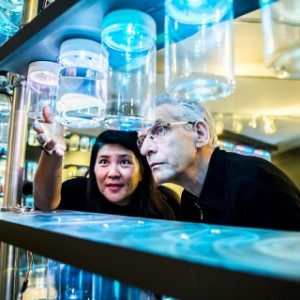 Like the director’s own films, the Rift Experience is somewhat intoxicating, even addicting, and it has created a new augmented character for the virtual world, the POD (personal on demand), a kind of connected assistant and virtual reality avatar.

The conference was hosted by The Immersive Technology Alliance, ITA, known as the official voice and industry body for technologies like augmented and virtual reality, 3D, gesture technology, and more.
# # #