High-tech leaders and digital entrepreneurs across Canada are part of a diverse yet inclusive group of Canadians who are criticizing, protesting and calling for the repeal of Bill C-51, the so-called anti-terrorism bill.

Several business leaders signed a letter saying the bill is actually anti-business, and that it will “undermine international trust in Canada’s technology sector”, and stifle the kinds of business the signatories’ technology companies can generate.

In another forum, a founding partner from Digital Always Media makes his assessment very clear and very blunt:

Canadians’ online activities are among those under scrutiny by Bill C 51.

“I’ve read the bill several times … C51 is written to allow the security services to circumvent the Charter without public oversight. People can disappear for up to seven days without notice of friend or family. Under a radically expanded definition of ‘terrorism’, you can lose your right to face your accuser or have full access to legal procedure.”

Nevertheless, the Bill has received royal assent and it is now law, thanks to a majority government party line vote. But disagreements with its core tenets are now helping to fuel the current federal election campaign, and some candidates have clearly stated they would repeal the legislation if elected.

Much of the criticism of the Bill looks to its language, which critics say is much too vague, leaving much too much leeway in possible interpretation and implementation.

Just one look at Bill C-51’s full and formal title could lead one to agree wholeheartedly: An Act to enact the Security of Canada Information Sharing Act and the Secure Air Travel Act, to amend the Criminal Code, the Canadian Security Intelligence Service Act and the Immigration and Refugee Protection Act and to make related and consequential amendments to other Acts.

If it’s not the syntax, it’s the omnipotence: C-51 is a massive piece of legislation, with at least five parts or acts within the one mega-bill, making its individual components that much harder to identify, understand and potentially enact.

Whether the lengthy title makes it clear or not, the bill targets people who encourage or promote “the commission of terrorism offences in general” (italics added). Critics of the bill say the wording is neither defined nor clear, and could lead to differing interpretations and wrongful use of the law.

Likewise law enforcement officers now have the power to arrest someone without warrant if it is likely that would prevent a terrorist act. Before C-51, arrest without warrant was allowed if it was necessary to prevent the terrorist act, and the change in terminology is problematic, legal and constitutional analysts say.

Critics therefore warn that Bill C-51 represents “a real threat” to Canadians’ rights and freedoms with no direct benefits.

What’s more, according to legal analysis by the Organization for Security and Co-operation in Europe (OSCE), Canada’s anti-terrorism bill violates the Universal Declaration of Human Rights, and the International Covenant on Civil and Political Rights, which Canada has ratified. The OSCE, a Vienna-based group known as the world’s largest security-oriented intergovernmental organization (which Canada joined in 1973), found that Section 16 of Bill C-51, which contains amendments to the Criminal Code outlawing “advocating or promoting the commission of terrorism,” places a number of direct restrictions on freedom of expression. 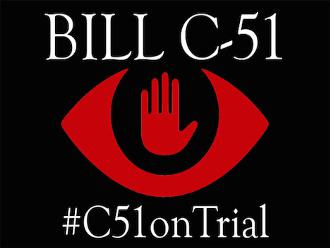 Canadian lobby group Open Media is among those protesting the passage of Bill C 51.

As well, at least two Canadian groups have already launched a legal challenge to Bill C-51 under the Charter of Rights and Freedoms. The two groups, the Canadian Civil Liberties Association and Canadian Journalists for Free Expression, have filed a case in the Ontario Superior Court challenging five sections of the new law. The appellants say they’re willing to take their case all the way to the Supreme Court of Canada.

Canadian national security law experts Craig Forcese and Kent Roach have gone through C-51 section by section, paragraph by paragraph and clause by clause and they outline how the provisions infringe freedoms, while providing suggestions on how to address such infringements by amending the language.

But, as mentioned, some want to repeal the Bill, not just amend its language. Green Party Leader Elizabeth May and NDP Leader Thomas Mulcair among them (they voted against the law, with the Liberals voting in favour, along with the Conservatives).

Liberal Leader Justin Trudeau acknowledged during the first election debate that his party’s original position on the Bill may have been “naive.” He has promised, if elected to a majority government, to repeal some, but not all, parts of the law.

The Harper government is cited as saying it will change nothing if returned to office, ostensibly referring to C-51.

The advantages of mobile app interoperability

Why you may or may not be watching Netflix in HD