I guess I’ve not been buying enough booze lately.

Inside a local LCBO store, my search for a particular brand of vodka (hey, it’s a work assignment, OK?) is interrupted by several other spirit bottles with surprising packaging.

One has a nice shot glass attached (back in the day, one didn’t need to measure – just unscrew the top and start pouring).

Nearby, there’s a 26-ounce bottle of vodka with a small two-ounce can of tomato juice attached (no way is that enough liquor to kill the veggie after-taste).

One bottle, with a tag tied to its neck saying “No Sugar Added”, stopped me in my tracks. I’ve never added sugar to a vodka martini, and it’s great to see the trend finally catching on!

Sadly, no Medea in sight. That’s the vodka I wanted – well, what I really wanted was the bottle. Breathless advance marketing messages and new product press releases have been extolling the virtues of the bottle that Medea Vodka comes in, and particularly the dose of high-tech that’s now part of selling one of the world’s best-selling spirits. 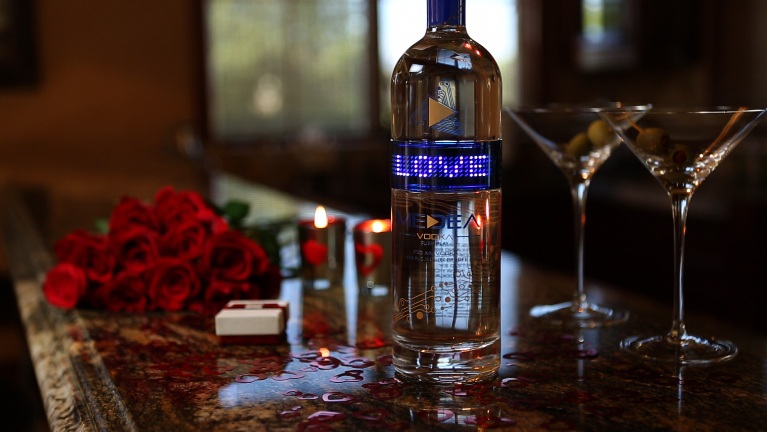 The bottle is embossed with small LED lights, set in a band across the front. Short messages can be selected or programmed, so the bottle will blink at passers-by: “Happy Birthday!”, “Here’s to You!” or other such phrases.

Text displayed on the electric-blue, battery-operated row of LEDs used to be programmed through a series of button pushes right on the bottle, but now, Bluetooth wireless and Apple’s iBeacon technology are being integrated into the product, so a smartphone and the Medea app can be used to set and display scrolling messages remotely.

“The spirits industry sometimes lags behind other industries in its ability to determine, in an efficient way, the demographics of its customers, or what new uses or tastes a customer might want,” said Brandon Laidlaw, Medea’s president and recently named CEO. 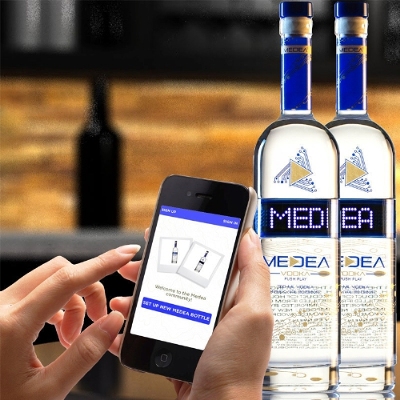 Short messages can be selected or programmed, so the Medea Vodka bottle will blink at passers-by: “Happy Birthday!”, “Here’s to You!” or other such phrases.

Medea is collecting valuable data, Laidlaw described, with the newly tech-enabled bottle and from the app registration process (which asks for a user’s age, perhaps understandably, but also for a device description, physical location and personal identification information).

With its social sharing and community-building goals, the app also can tell when a user is interacting with the bottle, or sharing some content to their social media applications, including Facebook, Twitter, and/or personal email accounts.

The California-based company says there are some 30 patents granted, and 20 pending, on its bottle technology.

Indeed: more than messaging and branding, the company plans to use its bottle tech to alert people when a bottle’s content is low. When a near-empty bottle is sensed, the app could encourage folks to stock up and search for local stores where it’s available. (We’re good at aligning technology with our marketing strategies; perhaps not so much with social policy. And, of course, the bottle has already been ‘reverse-engineered’ or ‘hacked’ if you will, so it can conceivably be controlled by other than the purchaser or owner. It is not only alcohol that should come with a “Use Responsibly” warning label.)

Developed in-house by the Medea technology team, the app knows what bottles are in its vicinity, which are on and which are ready to receive instructions for setting, changing and displaying messages. Whether on- or off-premise, users and brands can program messages with social- and marketing-centric content.

Medea is positioned for availability online, and in countries like the U.S., France, Australia, Switzerland, the U.K. and Canada (B.C. has been specified; the LCBO does not have Medea on its product list; e-mail inquiries to company reps remained unanswered at press time.)

Leaving the store with a bag under each arm, I bump into an old friend and accidentally drop one of the parcels; with a small puddle of undetermined liquid forming at my feet, my friend consoled me: “I hope it’s the vermouth…”

UPDATE: Shortly after this story went live, we did hear back from Medea reps, who noted that “the best availability would be online for Toronto” and referenced sites such as www.melandrose.com, www.superwinewarehouse.com, www.thewineclub.com and www.drinkupny.com as possible sources.

Sounds easy enough, but Ontario residents should also take heed of LCBO regulations about ‘Importing Beverage Alcohol’ – they are specific, and lengthy.

Review: Google OnHub is a router for dummies

The new Apple TV has promise with plenty of question marks