There’s still time to catch the international premiere of an energetic and informative show that mixes science and art, space and music, called the Rock ‘n’ Roll History of Space Exploration.

It’s all part of the five days of Beakerhead, an urban celebration of learning and collaboration among science, arts and technology that features several wonderful and sometimes weird activities, now on throughout the downtown core of Calgary, AB.

Beakerhead 2015, from September 16 – ­20, features more than 60 public events, including a theatre where the audience is dining as part of the show, virtual reality installations in which people can “walk through a human nose”, giant inflatable artworks, interactive light installations, and the country’s largest sandbox where amateur dinosaur-diggers can play.

Then, there’s the part-science, part-musical exploration of the space age, with science broadcaster Jay Ingram and Canadian astronaut David Saint-Jacques starring in a show that mixes information, education, creativity and not a little inspiration. 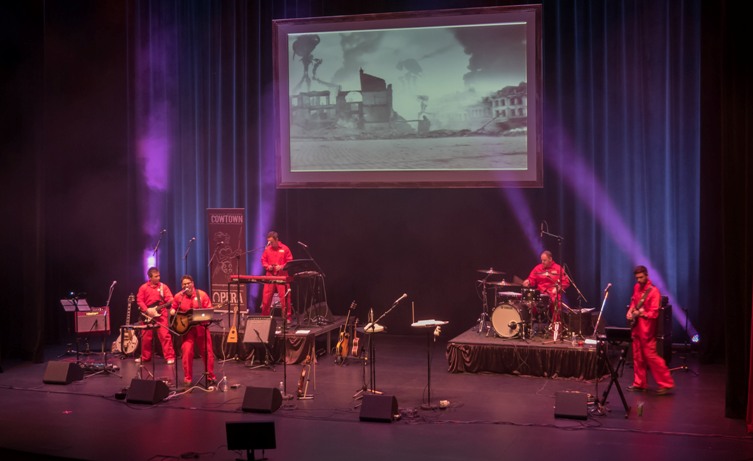 Jay and the Cosmonauts perform last night in Calgary. Photo by Denise Kitagawa

The Rock ‘n’ Roll History of Space Exploration (one performance was last night; the encore is tonight) features Jay and the Cosmonauts performing what Ingram calls “a soundtrack for space exploration.

“Before the space age started, some 60 years ago, we had our imaginations to go into space,” he explained of the driving forces behind the show. “Today, we have engineers and scientists to point the way. Science and the imagination are a powerful combination.”

Almost as powerful as the combination of entertainment and education.

Ingram, of course, is well-known as a radio and TV presenter, and he has delivered many science talks separate from his media career. He’s also a co-founder of Beakerhead, and still sits on its Board, helping to ensure that some 25,000 students can interact with Beakerhead through field trips, classroom visits and online connections.

So he knows full well that “if it’s not entertaining, no one is going to listen or care.” But priming the audience with an engaging mix of good stories about interesting people and amazing accomplishments (not to mention some familiar tunes) will help.

He rattles off some of the characters he introduces in the show, including Orson Welles, William Burroughs, Wernher von Braun and Walt Disney.

Mars is the common denominator, and Ingram readily admits his fascination for all things Martian works its way into the show in many ways: the band performs a great Beatles tune, I’ve Just Seen a Face, as a tongue-in-cheek reference to the human face so many people see (in their imagination?) so clearly on the Martian surface. Projected video and still imagery help illustrate the point as Ingram narrates in and around the songs themselves.

A good entertainer also knows when to pass the baton, so to speak, and Ingram notes the “perfect matching musicians” in the show, including the Cowtown Opera Company and the Theremin-virtuoso, Clara Venice.

The band itself personifies the driving force at Beakerhead – that magical combination of art, science, technology and creativity: band members include professional engineers, teachers, educators and, yes, at least one professional musician! 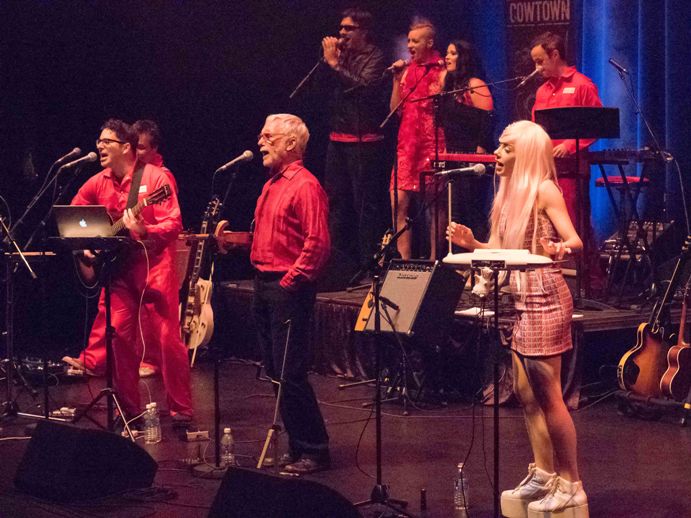 Space has long been an obsession of mankind, and it’s fast becoming a dream space for entrepreneurs of tomorrow.

Ingram describes the new Big Bang Residency, a program that calls for new multidisciplinary works to be created and built over the course of a year by small teams of artists, designers, engineers and technicians.

The selected project will be supported with cash prizes, workspaces and equipment rentals, thanks to several local organizations. Art and engineering professionals from around the world can submit proposals by October 9, and selected participants will show their creations at Beakerhead 2016.

“We’re looking to the future,” he says simply but significantly, as human imaginations have always done so.

Special thanx to Beakerhead and Michelle Htun-Kay for sending the ‘day-after’ photography.

‘Top Woman in Cloud’ to be named this month by CloudNOW