When you think “celebrity apps,” likely the first thing that comes to mind is the Kardashian family and their bafflingly popular selection of time-wasting (and arguably money-wasting) apps. But beyond that, there’s a wealth of useful and interactive apps that have some serious celebrity power behind them. 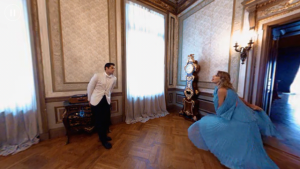 Some musicians release apps in conjunction with an album release, as a method of promotion. One of the most interesting examples was Taylor Swift’s Unstaged app (iOS, Android; Free), which launched in 2014 in partnership with American Express. Still available today, it provides a 360-degree view of the singer’s music video for the song Blank Space. Download it, then put your Android or iOS device in landscape mode and tilt it from side-to-side to explore the six rooms of the mansion featured in the video. Each time you enter a room, the view could change. You might catch the butler walking away, for example, or the video’s male lead twirling about with Swift. The app also includes clues to hidden items. It was both a clever idea, and timely since 360-degree videos were just starting to gain steam at the time.

Some celebrities have created apps to help them make a few bucks through novelty functions like voiceovers, stickers, fun wallpapers and 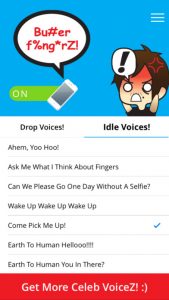 Actor Norman Reedus, who plays Daryl Dixon on the immensely popular AMC TV show The Walking Dead, created a mobile app called Buttafyngas (iOS, Android; Free). The idea: Reedus’ distinctive voice utters snarky remarks when you do things like drop your phone, snap a selfie, or leave your phone idle. You might hear him say something like “Again, really?” after your phone topples to the ground, or “Can we please go one day without a selfie?” once you’ve snapped a shot. There are a few phrases for free, but the more compelling ones will cost $0.99 each to unlock. And if you want the remarks to be a bit more racy, there’s also a “dirty” version of the app. Reedus has said that he hopes to add other celebrity voices over time in addition to this own. 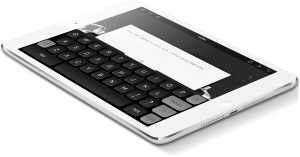 One app that really got noticed when it launched a few years ago is Tom Hanks’ Hanx Writer. Available for the iPhone and iPad (Free) it adds the nostalgic clicking and shifting sounds of a traditional typewriter to the virtual keyboard as you tap away composing a document. It’s a clever idea that combines modern technology with a throwback to the good ol’ days of text composition. You can even shut off the delete key to truly bring you back to the days when you had to use whiteout, or chuck your piece of paper and start over if you made a mistake. Not surprisingly, Hanks’ celebrity star power helped the app get tremendous attention, quickly rising up the ranks to become the number-one app download when it launched. And it apparently delivers, boasting stellar reviews of four stars and above to this day. 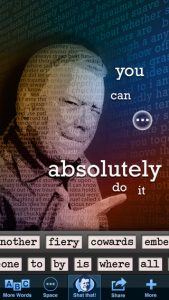 A bit too much cheese

Despite how silly some celebrity apps can be, they all present lucrative opportunities for supplemental cash flow, with arguably minimal effort. Want a great example: Actor Willian Shatner has an app called Shatoetry (pronounced “shat-oetry”) for iOS and Android that you can download for $1.39. What does that get you? The ability to compose poems by putting together a series of available words, then play back a recording of Captain Kirk’s voice reciting them. Silly, yes. Potentially profitable? Indeed.

From the individual consumer standpoint, a buck isn’t much to fork over, even if it’s just to satisfy curiousity. And a buck or two here or there can really add up to some significant coin. So it’s no surprise that celebrities are teaming up with developers in hopes of creating the next viral app sensation, or simply to engage in some self-brand promotion. All it takes is a viable idea and some creativity, a good developer team, and a loyal enough fan base. Clearly, as evidenced from the examples above, there’s no limit to the possibilities of how celebrities can, and are, using their status to cash in on the app game.