The show certainly has lived long, and prospered.

It’s been 50 years since the iconic first episode of Star Trek appeared on TV and in the decades since it has spawned several TV, film and media spin-offs. More are coming.

That’s not all: the show has spun off some real-world technology that’s in-use today, and it’s inspiring the development of new technologically-sophisticated gadgets in which Canadians again have a starring role. 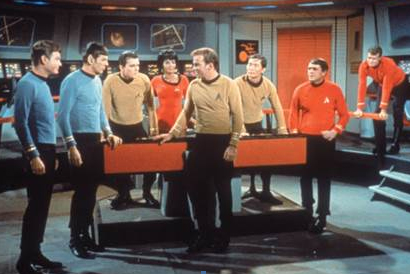 On September 8, 1966, TV introduced us to Star Trek, and a whole new universe of ideas, characters, adventures and technologies.

It was back on September 8, 1966, that Star Trek introduced audiences to a whole new universe of ideas, characters, adventures and technologies. Of course, Canada was front and centre, with Montreal native William Shatner in the starring role of Captain James T. Kirk.

This Sunday, September 4, as part of what surely must be galactic-wide celebrations of the 50th anniversary, a new hour long TV special documents the almost unbelievable foresight exhibited by the TV show’s creators and writers – and how it still pushes scientists, engineers and developers to boldly go into new arenas.

Building Star Trek tracks the restoration of the original Starship Enterprise and the unprecedented search for every remaining original part of the original 1966 TV show. The goal of the special: to reassemble the original series bridge around authentic artifacts. Meanwhile, every precious and slightly battered relic that’s discovered becomes a jump-off point to tell the incredible stories behind a series that sent popular culture into warp drive. 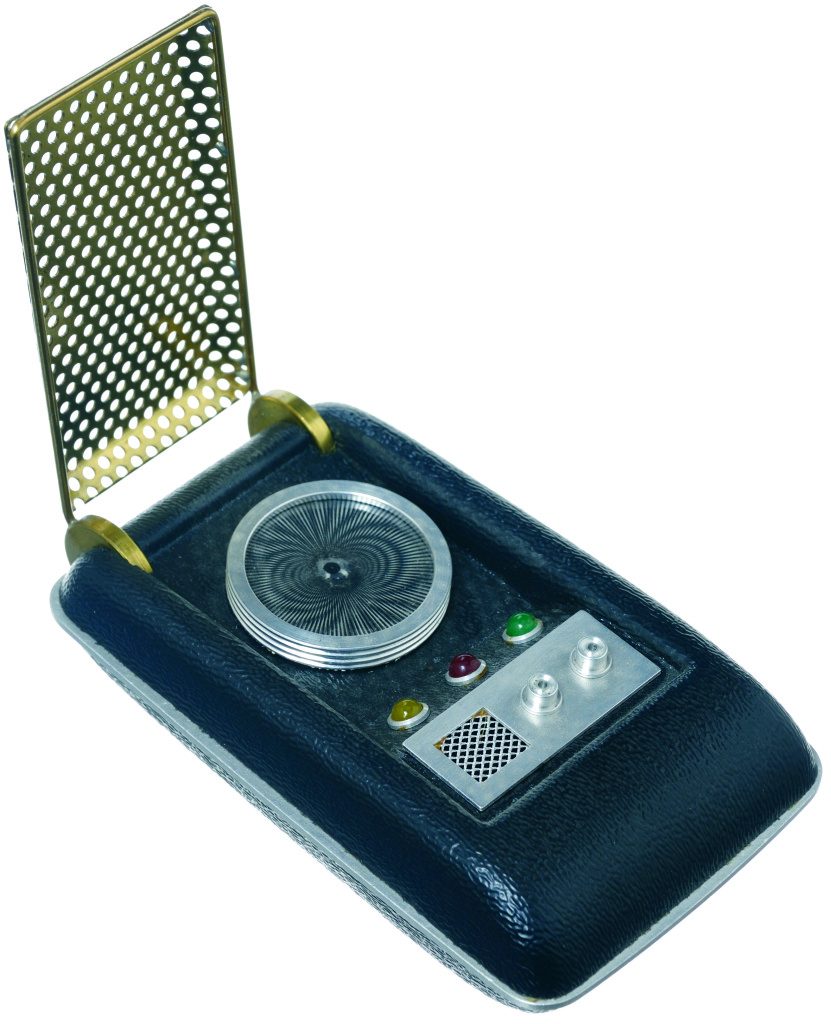 Of course, the show looks at the Communicator, which clearly is on the same technology continuum that today’s flip phones and smartphones occupy. And what about Lieutenant Commander Geordi La Forge, in a subsequent series, and his super-cool wrap-around computer visors – another part of the long tech development curve that connects with the Google Glass?

(It was in October 2012 that Amit Singhal, Google vice-president and senior search engineer, made the Trekkies drool: “I would make a bold prediction that in the next three to five years you will have a Star Trek assistant, with a lot more capability than your phone has now.”) 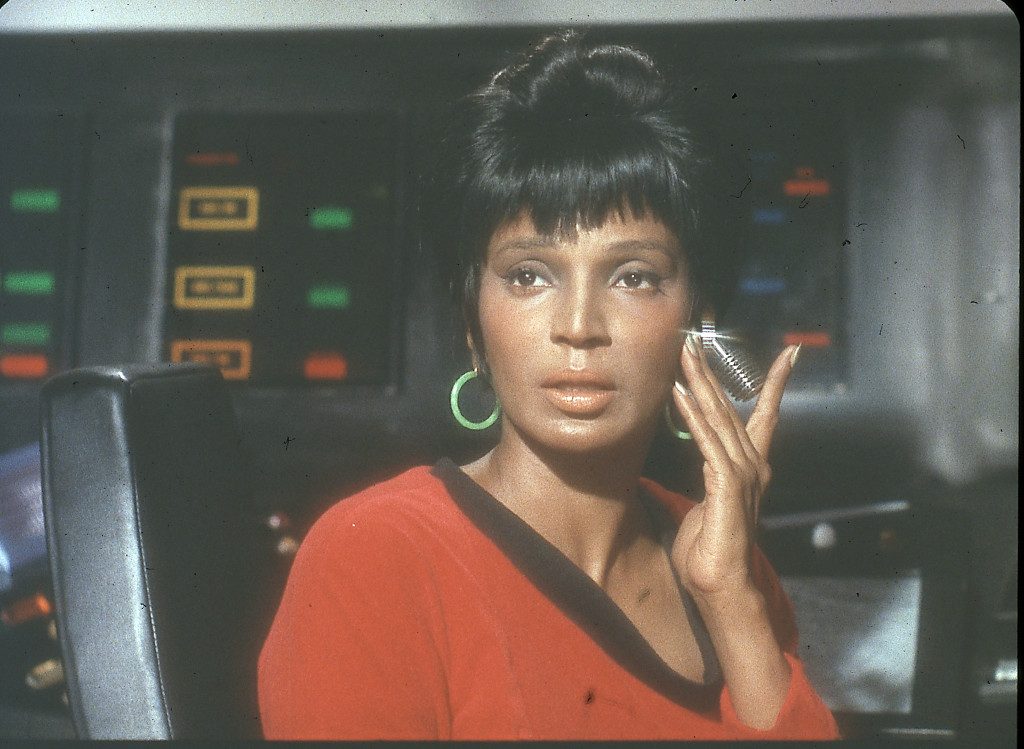 Lt. Uhura led the way in many ways – perhaps even with Bluetooth?

And no fan of the original series will ever forget the impact Lt. Uhura made, of course by breaking ground for social equity and gender equality, but also with her earpiece, way ahead of the market in terms of getting us Bluetooth technology.

Another major case in point is the Tricorder: that early – but steroid-pumped – version of the mobile tablet, be it iOS or Android-based.

The Tricorder was a medical if not technological miracle. Ideally, it could monitor and track the physical status and functions of the human body, then make health evaluations, formulate medical diagnoses and even deliver recommended treatments.

Not surprising that people are trying very hard to recreate it.

In fact, there’s a $10 million dollar Xprize awaiting the successful developer of a portable medical device akin to the fictional Tricorder. Tech giant Qualcomm is funding the competition, now in its fifth year but moving toward naming a winner in 2017.

Field testing and final evaluations — with real patients and doctors — are underway and will continue into early next year.

From Shatner to Stamps to CloudDX

A Canadian medical technology company and product development team at CloudX is a finalist in the competition, and in fact, the CloudX development team leader, Dr. Sonny Kohli, is speaking at a Star Trek anniversary conference in New York City this weekend, where the Building Star Trek show will be screened.

Here in Canada, the Canadian specialty TV channel Discovery will carry the special on Sunday night, but if you cannot wait even that long for the dilithium crystals to warm-up, there is a Star Trek marathon TV going on right now, as this story is being written and posted!

The Space Channel is already in orbit, airing a selection of what are called the Top Ten TV shows from each of the Star Trek spin-off franchises (see TV listings below).

Space will also be the exclusive Canadian broadcaster of the all-new series Star Trek: Discovery, premiering in 2017.

And, in what must be a bridge across the generations, the technology developed in the groundbreaking TV series Star Trek is honoured in Canada with…a postage stamp.

Certainly, the show and its ideas are living longer than anyone anticipated – and on many more media. 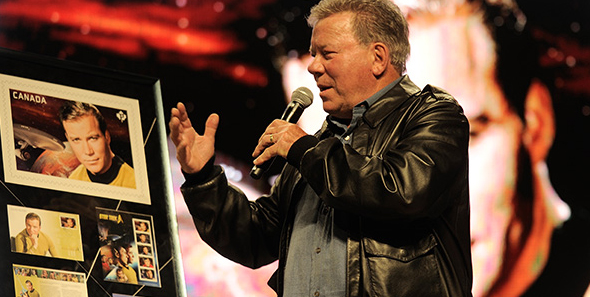 William Shatner with a framed stamp of his beloved character, Captain Kirk, at the Calgary Comic and Entertainment Expo. Canada Post bestowed the honour in celebration of the 50th Anniversary of the show, and the technology it has spawned along the way.

So, Whatsyourtech?  And was it first used on Star Trek?

There are tons of great stories about technology making its way from the TV or movie screen, Star Trek or not, to the real world. What’s your favourite example?

Lenovo bets on modularity for the smartphone’s future

A shooting gallery of 360-degree cameras