Embracing all that is Canada is a big job.

So compressing the country into a 20-minute video was a major creative challenge for a team of interactive filmmakers, media technologists and event planners behind this year’s Sesqui (for sesquicentennial) celebrations, part of the Canada 150 birthday party. 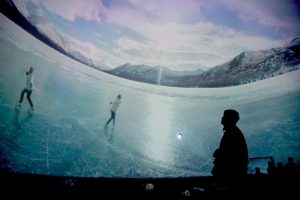 A 360-degree HD VR video tour of the Great White North is projected inside a cinematic dome as part of the Canada 150 celebrations.

Although certain aspects of the Sesqui program have been scaled back since the early and enthusiastic announcements last year, there are still many ways for Canadians to see and experience it. Sesqui is collaborating with planetariums, science centres, film festivals and other events across Canada to offer free screenings in both fixed and pop-up cinematic dome environments and VR installations, organizers confirm. (See date and location information below.)

For example, a special tour will visit six communities across Ontario this summer, bringing the 360-degree video to unconventional locations like shopping malls and parking lots. Two tractor trailer trucks will haul an 80-seat pop-up dome with internal 50-foot hemispherical screen across the province. While the dome tour was to have been cross-country, alternate arrangements have been made to make use of fixed dome environments elsewhere (like the TELUS Spark science centre in Calgary, where the film made its debut).

To create the video itself, the Horizon production team went from coast to coast to coast, shooting in all ten provinces and three territories on a tight 40-day schedule. Some shots needed as many as 30 GoPro cameras to fully convey the image detail and depth across a 360-degree horizon. Other sequences used a sophisticated, customized VR shooting rig with three high-end RED cameras used to capture remarkably crisp 9K scenery (with an overall 12,868 x 4,096 pixel count). 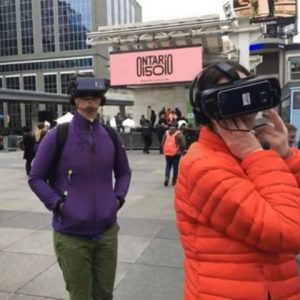 People passing through Yonge Dundas Square in Toronto can also visit other parts of Canada, thanks to immersive VR content presented as part of this year’s Canada 150 sesquicentennial celebrations.

More than 90 locations were filmed, from the choir scene in a Prince Edward country barn to nighttime skateboarders zooming along a major highway underpass. There are amazing scenes of figure skaters gliding gracefully across a frozen lake in the Northwest Territories, and a vibrant throw-down between urban hip-hop artists and Indigenous pow-wow dancers shot at Fort York in Toronto.

Executive Producers Andrea Stewart and Joanne Loton worked with a team of Sesqui staff, media technologists and creative partners on the video.

“We are collaborating with partners from across the country to create and experiment with new technologies that push the boundaries of immersive storytelling,” said Loton. “We want to celebrate Canada’s creative spirit and capacity to lead the global frontier in cultural and technological innovation.”

VR Contributions from Across the Country

Among those innovators, Redlab Digital in Toronto, where over 3,000 hours of video post-production work took place, digitally “stitching” together the individual shots from all those cameras into one immersive 360-degree video environment. Of course, the sound that’s captured is also manipulated and mastered into a 360-degree soundcscape; that work was completed at the Toronto audio facilities of Grayson Matthews. 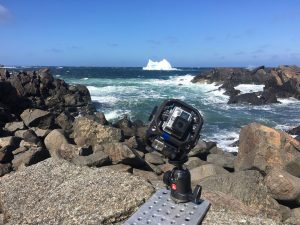 Shooting for a 360-degree video took producers and technicians on a cross-country tour; they in turn took along some sophisticated high-tech gear.

Loton noted the great work of Drew Lightfoot, the film’s director, and the contributions of 360- and live-action cinematographers such as Ray Dumas, Vinit Borrison, Jeremy Benning, Stephen Chung and Duraid Munajim, in bringing the film to life.

She also cited the work of special effects/GFX company The Vanity, where amazing animation was created to bring to life canvas paintings by Canadian great Lawren Harris and cave paintings by Sweetpea Neilson, an Ojibwa artist from Manitoba.

Additional media content, including six original interactive stories about Canada and the 150 years since its confederation, are available as part of the Sesqui project’s mobile VR app, which can be loaded onto OS X, Android and Oculus devices.

Helping to design and develop certain digital media components for the VR app is a Nunavut media company called Pinnguaq, and its partners at a BC-based VR company called uForis, where a proprietary VR engine was developed for use on this and other projects.

So not only does Sesqui and its interactive high-tech components put Canada in the spotlight, they also shines a light on the talent of creative innovators across the country, a reality certainly worth celebrating this or any other year.

More installation and events will be added, organizers describe. Click here for details.