Innovative ideas and new technologies are turning today’s farm operation into something looking more like a tech start-up, one that makes use of cutting-edge techniques and technologies to meet current demands while also opening up new market opportunities. 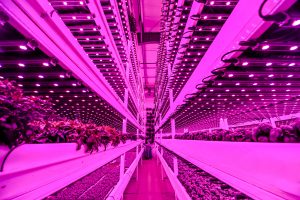 Computer analytics, advanced lighting equipment and real-time system engineers are feeding new approaches to food production here in Canada and around the world, and helping reduce costs and boost productivity in the growing indoor and emerging vertical farming sectors.

Vertical farming turns the traditional farmer’s field on its head: picture a giant warehouse with layers and layers of vertically stacked growing pans as far as the eye can see. The stacks stand in for hectares of open farmland. Indoor farming, aka controlled-environment agriculture, relies on new technology to recreate optimal growing environments.

No, sun and rain are not obsolete; neither are they constant and reliable around the globe or across this country.

So LEDs, or light-emitting diodes, are one of the keys to changing the economic – and geographic – factors of farming: consistent and controllable output; reduced heat output and power draw; lower acquisition and operating costs; all are among the LED’s benefits over conventional light sources, including the familiar old fluorescent tube. 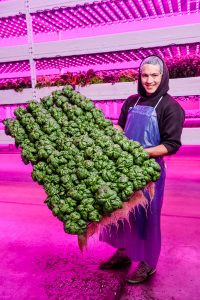 Plant inspections and harvesting are still part of the farmer’s life, even if it’s an Ecobain team member working indoors.

Those are among the results enjoyed at Ecobain Gardens, a fully controlled indoor growing facility and commercial vertical farming operation based near Saskatoon, Saskatchewan. Herbs and super-nutritious microgreens are among the crops grown and now sold in supermarkets across Canada.

Having expanded its early proof-of-concept pilot to its current operating facility, LEDs were incorporated over a six month build-out. Now Ecobain is producing crops at a commercial scale, in accelerated growing cycles, and saving up to $30,000 in energy costs per year while doing so.

The tech-enabled indoor farm can produce 18,000 pounds of produce each year in less than 1,400 square feet, using up to 98 percent less water and zero harmful chemicals or pesticides in the process.

“Our goal is to grow our operation to a scale where we can make a difference to the people of our community who need quality nutrition, no matter their economic standing or geographical location,” said Brian Bain, co-founder and CEO of Ecobain Gardens, saying the new technology helps him fill what he calls that “massive void … in our food system” that can limit people’s access to quality food. “Our passion for growing plants and providing the best possible product, in unique and alternative ways, has helped shape our business and perspective on farming.”

Technology has always been part of that vision: “We employ new technologies in many ways inside the farm; we have been remote-sensing and controlling for all environmental factors for four years now. Outside of the farm, we work closely with the National Research Council, the Saskatchewan Food Centre and the University of Saskatchewan on many different innovative food sciences-based projects to ensure we stay ahead of the curve in all aspects of the business.” 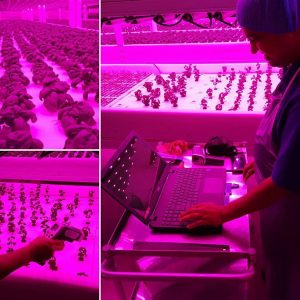 Ecobain Gardens has utilized new technologies to track and optimize favourable plant characteristics in its crops to ensure the produce “out-tastes and smells” that of the competition. competitors.

Ecobain worked with Philips Lighting to complete installation of several GreenPower LED Production Modules, Bain described, and once the more energy-efficient system was installed, Ecobain saw dramatic changes in its crops. The low heat output of the Philips LED lights produces healthier, more consistent plant growth by reducing the heat stress on the plant canopy and root zone and by providing more uniform lighting. The LEDs can be ‘tuned’ so their light output colour frequency is even more beneficial for plants.

“The lights we have are a mix of red and blue LED,” Bain described. “[W]e also have designed our farm to have a fairly high intensity of light compared to others in the space, for a few key benefits. We have recorded a long list of crop reactions from differing light spectra, intensities, and photo-periods, although lighting is only one of the many factors affecting plant growth and quality.” Yes, he added, the LED lighting gives the pink tint (as seen in photographs); full spectrum LEDs are used for the packaging area and other essential processes.

An LED’s heat output is much less, no matter its colour temperature. And that means increased space efficiency: crop trays and grow beds can be placed closer together for more yield in the same area.

And lots of good eats for the rest of us.

5 Ways to Pay From Your Phone