On July 27th, two teams of Canadian university students will represent Canada and compete in the World Championship for Microsoft’s Imagine Cup in Redmond, Washington. Of the 54 teams from around the world competing in the final leg, the winning team will take home $100,000, mentorship time with Microsoft CEO Satya Nadella, and a trip to next year’s Build conference, which is well-suited for up and coming developers.

Imagine Cup is a global competition that empowers the next generation of computer science students to team up and use their creativity, passion and knowledge of technology to create applications that shape how we live, work and play. Every year tens of thousands of students from across the globe compete for cash, travel and prizes and for the honor of taking home the Imagine Cup. 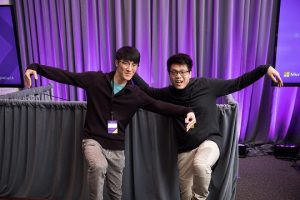 Who are the Canadian finalists? Karate Manatees, from the University of Toronto, bring a new eye to online sports, helping to improve the spectator experience.

“Daniel and I are friends from university”,  said Martin Leung ” and we met because we shared a passion in both playing and developing games. When we wanted to collaborate on a new project together earlier this year, he told me about the Imagine Cup and for us this was the perfect opportunity to not only develop our skills, but to put them to the test in a real environment.”

“We were inspired by the growing esports community for games such as League of Legends and DOTA 2, however these games are very complex and it’s difficult to appreciate professional play at a glance,” explained Martin Leung and Daniel Son, Karate Manatees. “So we wanted to try to create an esports-worthy game that is simple and easy to understand, but still offer significant depth for hardcore players. The approach we took was to make each player’s character identical and give them simple actions that can have complex interactions depending on the situation.”

NeuroGate, from the University of Waterloo and McMaster, have created software leveraging Microsoft Kinect to analyze gait 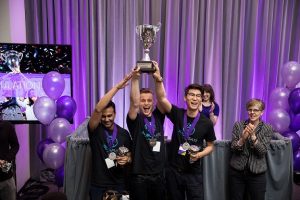 patterns and help diagnose neurodegenerative diseases. “The concept for NeuroGate came out of 36 hours of sleep deprivation, caffeine and a desire to improve healthcare at HackHarvard,” said Hrishikesh Suresh, NeuroGate and a med student at McMaster  . “The impact our project had inspired us to enter Imagine Cup. Getting the chance to bring our idea to the world stage is an honour we can’t put into words. We believe this is the beginning of the next revolution in medicine, and we can’t wait to share what we’ve built.”

Both teams will be showing off their software to be judged by a panel of technology leaders from Microsoft, Harvard University and Black Girls Code.

Scott Guthrie, Microsoft’s executive vice president of Cloud and Enterprise, will host the Imagine Cup Championships, which you can watch via a special webcast at 9 a.m. PDT on Thursday, July 27.

VR goes mainstream at the Rec Room in Toronto’s Roundhouse