Smartphone addiction is a real thing.  According to Psychology Today, there’s even a name for the anxiety you feel if you lose sight of your phone: nomophobia. And while many of us might think we don’t fall into that category, the Moment app provides a potentially terrifying glimpse into how often you’re actually glued to your smartphone screen. 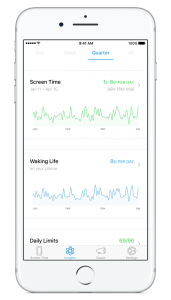 Download the app to a compatible iOS device (Android isn’t available yet), and it will log your screen time, hour by hour, day by day, letting you know how many hours per day is taken up using your phone, how many times you pick it up, how long you use it, and, if you set it up to log apps, which ones you use the most. Sessions are colour-coded, with green being a short session, yellow medium-length (i.e. that you’ve spent 10% or more of your daily limit in one sitting) and red too long.

Looking at the results can be scary enough, but even more telling is how Moment calculates the figures as a percentage of your waking life. It also tells you how your usage compares to the averages of other users. If the numbers alone aren’t enough to get you to think twice, this type of analysis just might. 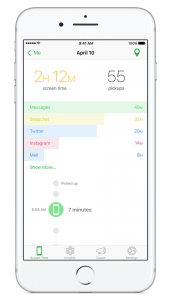 To track specific app usage, it’s a bit of a rudimentary process for now. Each day, you have to take a screen grab of your battery percentage use screen (under Settings > Battery) over the last seven days so it can determine which apps you used the most during that period. This may leave some sceptical with regards to privacy, but Moment says the location data is stored only on the physical phone in a secure place that other apps can’t access, and is never sent over the Internet. When the app is deleted, the location data is also deleted.

There are a few issues with the app in terms of accuracy. For example, when I’m at home, I often put my phone down and don’t turn off the screen. Aside from being a battery hog, that can also lead to inaccurate numbers. If you’re using your device for navigation purposes in the car, it will also heavily skew the numbers. To rectify this, Moment suggests using an app like Waze, and to keep the phone locked while only using voiceover navigation. But realistically, visual navigation is a key component for most. But Moment only logs screen time when the screen is awake, so if you’re doing something like passively listening to music on your phone with the screen off, or talking through a Bluetooth headset, it won’t count.

While the app is free, you can invest $5.49 to gain access to some useful features that can help encourage you to reduce screen time, or help you monitor and limit usage of your digitally-connected kids. It includes options like being able to set screen-free time and daily limits for usage, reminders to put the phone down, and even helpful coaching though a Phone Bootcamp. There are helpful tips offered for free as well, like the Bored & Brilliant course that takes you through your smartphone usage habits, and steps to try and change them, like going photo free on day one, and deleting one app on day four.

Some premium services might not quite jive with especially busy businesspersons who could find themselves annoyed when they need to do something important after hours. If you set a daily limit, for example, the app will continually block your screen with repeated notifications to put the phone down once you’ve reached it. But they may be great for ensuring that your kids aren’t spending too much time on their phones, or to serve as a daily reminder to use the phone only when necessary, and stop spending so much time on mindless activities like surfing Websites and checking social media profiles. You can even set up a family account to monitor usage of multiple members.

Moment only uses about 10MB of data per month, which is about the equivalent of visiting four Websites. So unless you have a fairly small data package, it shouldn’t put a dent in your monthly usage allotment. And chances are, those who have a desire to download the app have pretty large data plans anyway. Moment does, however, have to run in the background in order to work properly – if you force quit the app, it will stop logging screen time until you log in again. This will eat up battery life, but chances are that, for many, Moment will be the type of app you want to use for a temporary wake-up call, not forever. 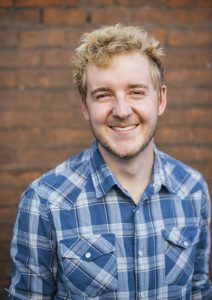 The app was created by Pittsburgh, PA-based Kevin Holesh, who says he was inspired by his own neglect of family and friends in favour of his iPhone. “ I built Moment,” he says, “to help nudge me in the right direction by automatically tracking my daily iPhone use and giving me a warning when I’m on it for too long.”

Holesh says since using the app himself, he’s reduced the time he spends each day on his phone from 75 minutes to 40.

What mobile payment options are available for Canadians right now