Today’s dynamic digital economy has set the table for “the best era for women entrepreneurs”, with digital technology both empowering women with a louder voice to address social challenges and a greater ability to create and steer new business opportunities.

At the same time, private and public sectors leaders in Canada, China and elsewhere are calling for more effective programs, policies and industry participation to address the well-documented history of discrimination and lack of opportunities that women face in the tech industry.

At a recent international event designed to bring attention to the challenges and opportunities women face in the global ICT sector, one of the world’s most successful women entrepreneurs teamed up with the Premier of Ontario to support and encourage women entrepreneurs, no matter where they’re from. 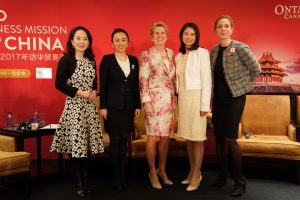 Diane Wang, the founder and CEO of DHgate.com, called the biggest B2B cross-border e-commerce marketplace in China, and Kathleen Wynne, the first female premier of Ontario and the first openly LGBT head of a provincial or federal government in Canada, pledged their support for women entrepreneurs through a public and private partnership in the Asia-Pacific Economic Region (APEC), of which Canada is a member.

They called their event “Digital Era – the best era for women entrepreneurs.”

“There are only a few moments in history when we have the chance to move forward, move fast, and the moment is now,” Wang said, describing the success her country has realized of late: “As digital technologies advance, the percentage of women entrepreneurs in China has been growing fast year over year, reaching 25% by 2017, compared with just 3.6% a few decades ago.”

The Ontario Delegation’s visit to China came just ahead of Prime Minister Justin Trudeau’s own official visit, now underway. One of the key goals is to harmonize trade goals and benefits for both Canada and China.

China is Canada’s second-largest trading partner; merchandise exports to China were almost $21 billion in 2016, an increase of four per cent over 2015. Among our top exports were natural resources, like forest products, copper and iron ores, not digital devices or consumer electronics – and not typically products associated with start-up companies.

In Canada, nearly 90% of export companies are small and medium-sized enterprises, but they produce only 25% of total Canadian exports.

Digital trade is the unprecedented opportunity for Canadian SMEs to increase their share of the export market while at the same time it will bring in more Chinese products into the Canadian market.

Clearly, digital opportunities and challenges exist on both sides: matching the market need, product offerings and necessary infrastructure to bring the two economies closer together will take careful planning and execution. The range of Canada’s exports must broaden to help small companies and early-stage tech start-ups penetrate new markets, while at the same time the growing Chinese entrepreneurial class should not be allowed to overpower its new partners.

Keep in mind that a leading lobby group for female professionals here says women are woefully under-represented in the Canadian tech sector and the participation level will continue to be low for the foreseeable future.

This is due to women taking less interest in pursuing engineering degrees and because the ICT industry has no system in place to hire and retain female employees, according to the study from Women in Communications and Technology (WCT).

Today, women account for barely 27.1% of the workforce in the Canadian tech sector, nearly a three per cent decrease from 30% in 2011, WCT described.

Speaking to this identified need for a more inclusive economy where men and women have the same opportunities in the labour force, Wynne described her government’s policy “to see 30% of women on boards in the private sector, and in the government, we set that to 40%. When you get women involvement at a rate of 30%, there will be different issues that will be discussed.”

She’s no doubt referencing a rather sobering report last year from #movethedial, PwC Canada and Mars Discovery District in which it was reported that women make up only five per cent of CEO positions in Canadian technology companies, and only 13% of executive team positions. Even more sobering, the study reported that 53% of the over 900 Canadian tech firms surveyed had no female executives, and 70% had no female partners.

Women are at risk of losing out on tomorrow’s best ICT job opportunities, whether in the public or private sectors, or as an employee or entrepreneur, according to a global United Nations study. This is especially so within the science, technology, engineering, and mathematics—or STEM—fields. A quarter of women engineers leave the field after age 30 (there’s a roughly 10 per cent attrition rate for men), and women receive only seven per cent of venture capital in Silicon Valley.

(In response, the U.N. has launched an initiative to identify industry-specific barriers to women’s and girls’ advancement in technology and entrepreneurship, and to take key actions needed to reduce them.)

In addition to the Wynne/DHGate pronouncements, there are other attempts in this country to tap into the potential of women entrepreneurs and give their businesses the support needed to succeed by increasing venture capital financing to female-led tech companies.

The Ontario Standup Ventures Fund will make approximately twelve to twenty investments over the next several years, in amounts ranging from $250,000 to $1 million.

In order to qualify, businesses must have at least one female founder whose ongoing active role and ownership status in the business meets certain standards. The fund is managed by the Business Development Bank of Canada (BDC) and MaRS Investment Accelerator Fund (IAF), funded by the Province of Ontario. 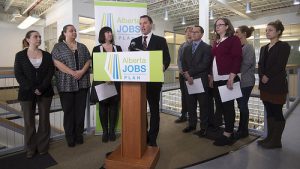 The advocacy group known as Alberta Women Entrepreneurs (AWE) will receive government support and funding for a program that brings together like-minded women entrepreneurs to explore opportunities for accelerated business growth in a peer group setting.

And the Canadian non-profit organization Start Up Canada has plans to unveils its new digital strategy for the new year in a special video program to air December 12. Start Up says it will review emerging technologies and trends that are impacting the entrepreneurial environment and business landscape faced by women in technology.

The best era for women entrepreneurs may well be upon us, but new strategies, new policies, new international agreements are needed to realize the best these times have to offer.