The use of facial recognition technology in retail, healthcare, law enforcement, travel & tourism, entertainment and other industries continues to grow, even as concerns about its overall accuracy and safety grow as well.

Facial recognition software tools are used to analyze both live and recorded images of people. The tools can be used to match or confirm a particular person for security, authentication and protection purposes. Facial recognition capabilities are sophisticated enough to not only assess and analyze a person’s age and gender, but also their ethnicity, behaviour, emotional state and physical intentions (as demonstrated by pace of movement, direction, surrounding crowd flow, etc).

NEC is among those companies to offer advanced technologies and solutions to make fingerprint identification and facial recognition a key component of safety and security systems.

A Research and Markets report on the sector indicated that the global mobile biometrics market will grow at a rate of over 100 per cent in the next three years. The overall facial recognition market is expected to triple in size, growing to a projected $6 billion (USD) by 2020.

Canadian tech companies are already taking advantage: a Winnipeg-based company called Mexia One was among the first to use facial recognition systems to provide secure event access at a very large and internationally popular industry event, Mobile World Congress 2018.

It drew more than 100,000 attendees, and some 4,000 visitors opted-in to the ‘test’ by allowing system operators to scan their faces in exchange for easy access (paper documentation was also recommended by show officials) to the show. As such, being able to get real-time results was crucial to the process.

Depending on computational horsepower, Mexia describes its technology as being able to support three million comparisons per CPU per second (roughly one comparison of a database record to a facial image every 300 nanoseconds)!

Another Canadian tech company, Oakville-based Applied Recognition, took the basic facial recognition capabilities in its consumer photo tagging and indexing app, Fotobounce, to the next level with the release of Ver-ID, an enhanced identification verification and user security system said to provide greater security than traditional username/password logins.

Of all the gadgets, devices and services that are now or may soon use facial recognition instead of personal passwords and manual log-ins, perhaps one of the most disconcerting (in light of recent revelations) is Facebook.

The social media giant announced in April that it would be enabling a facial recognition feature in Canada that automatically tags Facebook users in uploaded photos as a tool against false impersonation on the social network. 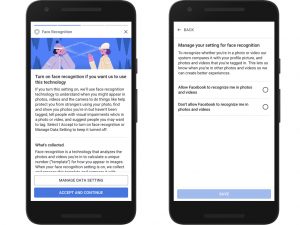 The decision to offer facial recognition is a controversial one for Facebook, already facing heat over the way it handles users’ data.

The system has been in use elsewhere since 2011, but some implementations were delayed after objections from data privacy groups. The renewed product push reflects enhancements to the system, to the point where Facebook will also now recognize faces in Europe (if desired by the user).

“We’ve offered products using face recognition in most of the world for more than six years. As part of this update, we’re now giving people in the EU and Canada the choice to turn on face recognition,” Facebook announced in a blog post by Chief Privacy Officer Erin Egan and Deputy General Counsel Ashlie Beringer. Facebook stressed that using the feature would be “entirely optional.”

That’s not what some Facebook users in the U.S. say; they have filed a class action lawsuit against Facebook, alleging that it used facial recognition on photos without user permission. 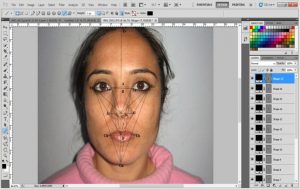 Popular image manipulation software can be used in facial recognition systems. Researchers used Adobe Photoshop CS5 to remove backgrounds from photos, then overlayed grid markings to help match different images containing the same face, even if the image was taken with different magnifications and from different distances.

So facial recognition technologies face some push back from concerned citizens and potential users. But there is resistance, too, from the tech industry itself, and people who are developing ways to spoof surveillance systems.

Rather than trying to hide or obscure one’s face from facial recognition technology (because such systems can see through obfuscation attempts like wearing glasses or a big floppy hat), one new product in particular allows users to present an entirely new face and alternate identity to the recognition software: that of the product developer!

The folks at URME Surveillance are doing so in an attempt to not only combat ubiquitous surveillance, but the possible misuse of data collected in surveillance, recognition and identification processes.

Rather than hiding behind someone else’s face, researchers at the University of Toronto have come up with a technological way to disable facial recognition systems and disrupt image-based search processes.

“[I]t is possible to craft fast adversarial attacks on a state of the art face detector,” write Avishek Bose and Parham Aarabi of the Department of Electrical and Computer Engineering at U of T (Aarabi and his cohorts there have been working with facial recognition tools for some time, and they have commercialized other products that utilize similar recognition algorithms).

They say their team plans to make the privacy filter publicly available as an app or website tool. “Personal privacy is a real issue as facial recognition becomes better and better,” Aarabi says. “This is one way in which beneficial anti-facial-recognition systems can combat that ability.”

Facing up to Law Enforcement

That may not be what police services in Canada and around the world want to hear.

More and more, police and law enforcement agencies here in Canada and around the world are using facial recognition as an investigative if not preventative tool. Calgary was among the first police services in Canada to do so; while Toronto’s own police force has long been said to be investigating the use of facial recognition tools, it now has the support of the Ontario government, along with some $19 million funding for several projects, including the purchase and implementation of a facial recognition system.

Barring further announcements about such implementations, it is not clear how, when, or which Canada police service will make use of facial recognition, but they will surely be pitched to do so. The latest company to offer up facial recognition tools to police and law enforcement is a big one – Amazon.

Amazon’s system, called Rekognition, has capabilities that allow its user to identify people whose images are captured in full motion video, and it can identify and follow multiple people and track their movements in near real-time. Concerned about potential for unfettered surveillance by any number of users, a coalition of concerned citizens, organizations and tech companies has sent a letter of protest to Amazon, asking that it Rekognition “take off the table”

Review of the Fitbit Versa smartwatch

Tech That Helps With Sleep