On her way into a crowded session about protecting digital privacy and personal freedom, the speaker acknowledged that it’s a never-ending battle.

“We have to stay one step ahead,” she said plainly of the race against numerous threats to online privacy. 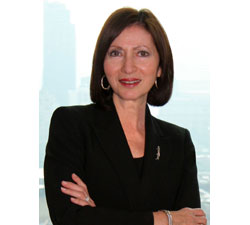 Dr. Ann Cavoukian, Distinguished Expert-in-Residence at the Privacy by Design Centre of Excellence at Ryerson University.

Dr. Ann Cavoukian is a battle-tested warrior in the fight to preserve our digital freedoms and personal privacy online. She served three terms – almost 20 years – as the Privacy Commissioner of Ontario, and her office often took on cases of alleged privacy violations impacting individuals, institutions and organizations in the province.

In 2010, she launched the Privacy by Design concept for embedding privacy protection into digital products and services from the get-go. Her seven foundational principles for building in privacy are now widely recognized and embraced.

Today, as the Distinguished Expert-in-Residence at the Privacy by Design Centre of Excellence at Ryerson University in Toronto, Dr. Cavoukian is still on the front lines: she’s not only increasing awareness about threats to our online privacy, and proposing remedies for them, she’s at the head of certification process for Privacy by Design, one that provides training, auditing and assessment to entities who want or need to improve digital privacy and protect their digital data.

That means, well, all of us!

As she pointed out in her more formal remarks, delivered at the Toronto Reference Library earlier this week, privacy forms the foundation of our personal and social freedom. She drew a direct line between the robust protection of our freedoms (including civil liberties, human rights and property rights) and the ability of people or societies to be innovative and creative.

It’s not, she added, about having something to hide.

Privacy means having some degree of personal control over valuable assets – our data. User control, or what she would later call “informational self-determination”, means you are in charge of your data, and you are empowered to make meaningful decisions about how it gets used – or not.

“You have to be able to control your own data,” she underscores. Otherwise, someone else will.

She gave a real-world, close-to-home example: Metrolinx, the regional transportation system in and around Toronto, and its Presto digital fare card.

While she may be right to fret over the costs of the system, or the fact that the fare card will eventually replace individually purchased tokens or tickets thereby forcing people into an online shopping environment they may not want to visit, she is very upset about the fact that the transit system was sharing rider data with police agencies – and apparently without a warrant requesting them to do so.

“They need to come clean,” Cavoukian said of the data sharing habits. “There’s cloaked data collection going on, and they must disclose their data usage.”

Users, she pointed out, did not give permission or consent to such sharing, and any entity collecting personal data must respect the privacy of its users.

Although Metrolinx has, since the data sharing revelations were made, changed its privacy policy, Dr. Cavoukian still urged any Presto user to complain to the issuing agency about its data practices.

Apparently, more and more people are complaining, or at least, expressing their concerns about data security and the lack of control they have over their own data. Dr. Cavoukian said she’s never seen such concerns being 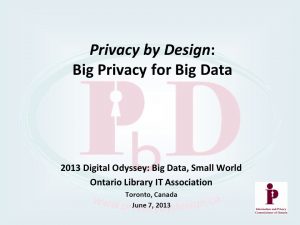 Public libraries and library associations have long supported efforts to present digital privacy and data security information. Privacy by Design presentations, with ideas developed by Dr. Ann Cavoukian, have been given for several years now.

expressed in such volume, citing surveys showing the public’s concern over digital privacy is very high – in the 90th percentile.

And she’d barely even mentioned surveillance (“the antithesis of privacy”), the Internet of Things (“there’s a million privacy risks in IoT”) or all those news reports about major data breeches (they’re “rampant” in Canada she said, and we know just “the tip of the iceberg”).

Good thing the library is there!

Not just because it hosts talks by concerned and knowledgeable privacy experts such as Dr. Cavoukian, not only because many librarians are also on the front lines of personal data protection, but because many libraries stage Digital Privacy Expositions for anyone interested in protecting their personal property!

In that never-ending battle to protect our personal data and digital freedom, we all could use a good check-up.

Putting the brains back in bookkeeping by leveraging cloud technology

The road to simpler small-business billing