There are plenty of reasons to be worried about air quality these days, indoor or out.

Yet it may not be the typical chemical pollutant that is most worrisome. Pollen, bacteria even pet dander can cause ill health and bad reactions in many people.

So products and solutions for cleaning the air, especially indoor air, are quite popular. Improving air quality can help asthma suffers and reduce allergy symptoms, but it can also help with sleep patterns, boost energy levels and bring a personal sense of well-being.

It’s not practical to remove all airborne irritants and pollutants from your home or office, but there are several steps and, as mentioned, lots of products that can help.

Air purifiers capture or remove some of the common airborne irritants that plaque our office, apartment or house. Portable air cleaners, especially those using high-efficiency particulate air (HEPA) filters and electrostatic precipitators, can remove dust particles, pollen, tobacco smoke and the like by forcing air through a fine mesh filter and trapping them

Some air purifiers combine mechanical HEPA filtering with a kind of chemical filter, often activated carbon, to further filter out micro-pollutants and gases in the air. 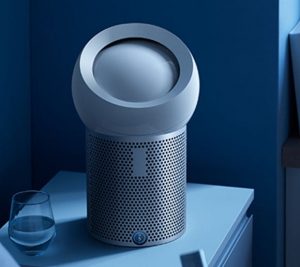 The Dyson Pure Cool Me is a personal purifier designed for smaller spaces than other purifiers (including those from Dyson itself). Provided image.

The Dyson Pure Cool Me uses both to clean and purify the air around you – it is a personal purifier, and it’s designed for smaller spaces than other purifiers (including those from Dyson itself).

Not only does the Pure Cool Me use both activated carbon and glass HEPA filters to clean the air (the company says the approach captures 99.97% of pollutants and allergens as small as 0.3 microns), it acts as a personal air cooler, too – blowing steady stream of cool air where you want it.

There are up to ten airflow speeds (all functions are accessed via a small remote control device) ranging from the very gentle almost imperceptible level one to the powerful flow of ten which could easily be used to blow back a fashion model’s hair during a photo shoot!

Even more control over airflow is achieved by tilting and turning the unit’s big dome top, which looks like the top of a giant egg or something, sticking out of its metallic mesh base. The unit comes in black or white; it stands about 15 inches or some 40 cm high. It is not exactly tiny and while it is not heavy at roughly six pounds or just over two kilograms, a flip-out handle or something would be nice when moving the unit from room to room.

By pushing that curved egg surface up or down, the airflow direction can be easily adjusted. By turning the unit’s oscillation feature on, the unit slowly waves back and forth, distributing cool clean air over a wider area (about 70 degrees from side to side) and boosting air circulation in the immediate vicinity. 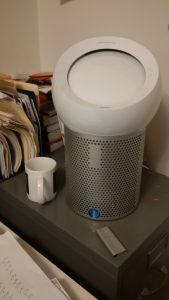 The lowest setting is often plenty for cooling and cleaning the air in a small home office; airflow speed and direction on the Dyson Pure Cool Me are easily controlled to suit the space and the user. Smartphone image.

Dyson calls its airflow system Core Flow, and the precision with which the air can be controlled to hit exactly where you want it is a great feature – some other air purifiers simply blow air straight out the front, and you would have to physically move them or prop them up somehow to do what the Pure Cool Me does.

As mentioned, functions are controlled with the remote, and there’s a small LCD on the front of the unit to show speed, mode and filter status. 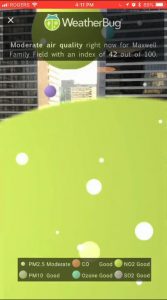 The Dyson Pure Cool me air purifier has many features, but it is not a smart device. There are ways out there to check air quality, such as the WeatherBug app shown here and written about at WhatsYourTech.

What the Pure Cool Me does not do is provide feedback about the air quality in your home or office. It is not a smart product, in that it does not work with Dyson’s Link app (as some of its other products do).

So it does not track pollutants or measure air quality, nor does it automatically turn on or off because of the air quality it senses around it. There is a function to check the filter internally, and the unit will confirm whether a a new filter is needed (roughly once a year under normal use, Dyson says).

The fact that the flow and direction of cool, clean air can be so easily and fully controlled is one of this unit’s big pluses: I personally do not want air blowing right on me when seated at my computer desk, for example, and having a gentle airflow above my head that moves the air around my home office space is much more comfortable to me. As I write this, it is a cool rainy day so just a slow quiet setting of one is fine from the unit. But when the days get hotter and the air a gets bit, well, thicker this summer, I think I have a good counteracting solution.

So does a friend of mine who recently purchased a different air purifier for her use at home and in the office. It is noisier than the Dyson, and the airflow cannot be as easily controlled or directed. She’s jealous of the features, functions and even the look of the Dyson, but to be honest, she was not as jealous about the price.

Dyson Canada lists the Pure Cool Me around $450; the unit my friend bought was about one hundred.

But when putting a value on the air you breathe, well, there may be other decision-making factors to consider. 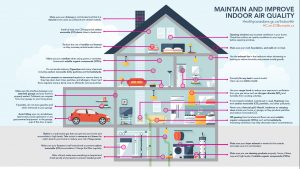 Tips for getting and maintaining good clear air quality indoors are available from multiple sources, including the Canadian government. Technology can help, with the use of HEPA filtration such as found in air purifiers and vacuum cleaners.