Research into the potential effects of smartphone radiation may not have determined conclusive evidence for harm or lack thereof, but a list of the phones that emit the most – or the least – radiation still makes for disturbing – or reassuring – reading.

Depending on which device you use, or which report you read.

Electronic products can emit electromagnetic interference (EMI) and mobile phones can generate high radio-frequency (RF) fields when transmitting data – our voices, our tunes, our texts and tweets. As targetted as those high frequency transmissions may be, some energy leaks out and is absorbed by our bodies – the closest body part to the phone absorbs the most radiation. While in use, that probably means it’s our head that absorbs the most. Putting your phone in your pant’s pocket probably means the absorption rate is highest, uhh, elsewhere.

Wherever that radiation absorption occurs, researchers and scientists have a measurement for it – called SAR, or specific absorption rate. SAR is calculated by comparing the energy that is output by the phone with the mass or weight of the body doing the absorption. In order to avoid adverse health effects, the recommendation goes, the SAR from any smartphone, cellphone or mobile device should not exceed two watts per kilogram. 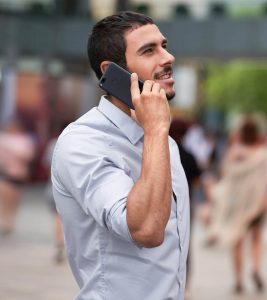 The Xiaomi Mi A1 is pictured in a press image from the manufacturer.

That’s the word from the International Commission on Non-Ionizing Radiation Protection (ICNIRP).

And while it may be somewhat reassuring to know, according to published tech specs from phone manufacturers, that no mobile phones currently on the market exceed the recommendation, it may give pause to realize that the ICNIRP’s limit was determined 20 years ago.

It’s been nearly that long that the Federal Office for Radiation Protection (BfS) in Germany has been gathering data and publishing a list of SAR values for most if not all commercially available mobile phones. 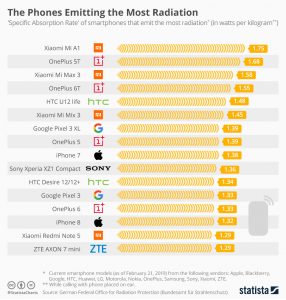 Statista’s chart shows the phones that emit the most radiation, based on research done by the Federal Office for Radiation Protection (BfS) in Germany.

In its most recent update of the list, the smartphone said to put out the most radiation is the Xiaomi Mi A1. Another Chinese phone, the OnePlus 5T, takes second place.

At least half of the highest-output devices are made by Chinese manufacturers, but top-of-the-line handsets from leading international makers like Apple and its iPhone 7 and the latest Pixel device from Google are on the list, too. No Samsung phones are on this list.

Again, while there is no universally accepted maximum exposure recommendation, the BfS does acknowledge the environmental friendliness of phones with an SAR rating of less than 0.60 watts per kg. All of the phones on the most radiation emitted list are double this health and safety recommendation. 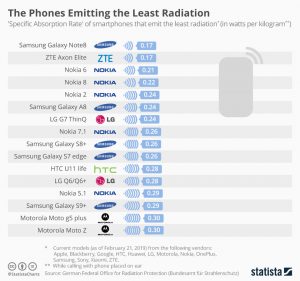 Another Statista chart shows the phones that emit the least radiation, based on research done by the Federal Office for Radiation Protection (BfS) in Germany.

There is also a list of least-emitting devices and top sellers are there. Samsung’s Galaxy Note8 and the ZTE Axon Elite, for example, lead the way with low SAR numbers around 0.17. No Apple device made the list of phones emitting the least radiation.

What’s more, there’s a comprehensive device database that you can use to search for radiation emission information regarding the specific model you use, and how you use it.

That’s how as in how you use, hold, carry or store the device. And how, as in how long you use it.

Everyone is different in that regard, but one industry survey says the typical adult will spend about three and a half hours on their device as a daily average. That number rises about eleven minutes year-over-year.

That’s a disturbing trend in light of other scientific evidence and medical recommendations that urge precaution when using mobile phones and limitations of the time spent using them (as a way to reduce body exposure to their radiation output).

As the presently available scientific evidence is said to be insufficient to confirm threats from radiation-emitting devices (or even to prove the reliability of the current safety standards, for that matter), more research into mobile phone radiation and the impact of human exposure levels is needed.

Until then, a precautionary approach is recommended for smart cellphone users. Be aware of the device you use, check its radiation rating, limit the length of time you use it, watch the way you carry it.

And know that mobile phone manufacturers are taking some precautions, too. 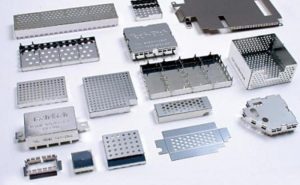 EMI shielding materials make up a big and growing market.

In fact, the market for cellphone shielding equipment that at least reduces electromagnetic interference is growing quickly, and it is expected to reach $8.2 billion USD within five years.

The shielding is used to reduce the coupling of radio waves, electromagnetic fields and electrostatic fields, market researchers say. They’re described as “stimulants” to the human body and they come from electronic products like cellphones, which are said to be particularly bad due to their proximity to the human body.

But perhaps the market has another message about radiation-emitting devices: individual smartphone usage may be up, but smartphones sales are at their lowest level in five years, according to research firm Canalys.

Across North America, there’s been an 18% drop in reported sales from last year’s first quarter numbers, the biggest drop ever.

That’s disturbing – or reassuring – reading, depending. 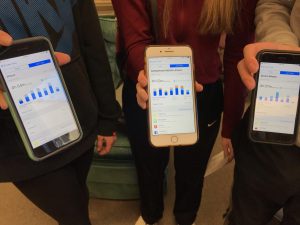 Individual smartphone usage may be up, but smartphones sales are at their lowest level in five years. AHS image.

Canadian Businesses Struggle With How to Protect Their Data