It’s been 70 years in the making, built on the shared experiences of people who have walked literally thousands of kilometres. 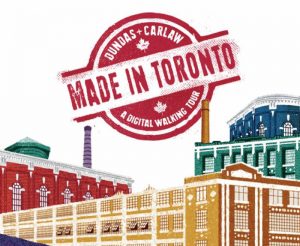 The desktop and mobile app, called Dundas + Carlaw: Made in Toronto, is an interactive and graphic-intensive exploration of a neighbourhood in transition. Combining playful animations and friendly cartoon characters, the app takes users along an eleven-stop tour of the area while highlighting several important industrial sites and factories, both long-gone and still standing. Recorded audio and video segments embedded in the app add a personal context to the content, sharing the personal stories and unique experiences of those who lived and worked in the Leslieville ‘burb of eastern Toronto.

The digital tour shows-and-tells just how much the district has changed over the years: it was once a bustling manufacturing centre, from which popular products were distributed around the world. But from those industrial roots has sprouted a new ‘hood that’s now a trending arts and cultural hub. Many of its near-iconic factory buildings have been renovated and converted for residential and commercial uses. It is a recurring theme in many urban centres.

History may not repeat, but it rhymes. And the city surely has rhythm.

That historical perspective comes from the now more than 70 years of activities conducted by Heritage Toronto. Among them: the more than 60 individual (and physical) walking tours that are conducted each year as part of its 25-year-old walking tour program.

(Informal tours have long been led by heritage buffs and engaged volunteers, but the more formal guided walking tour program began in 1994 with 18 neighbourhood tours. Today, there are more than 60 tours exploring the city’s diverse neighbourhoods and cultural attractions. Tours are vetted and organized by Heritage Toronto, but they are still led by volunteers, including urban historians and academics, neighbourhood committee members and community activists. Print and digital versions of the seasonal walk brochure, with this year’s tour descriptions, times and dates, are available from the agency.) 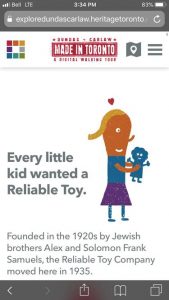 The Reliable Toy Co. made some of the first plastic toys in Canada.

As Allison Bain, Executive Director of Heritage Toronto, describes the agency’s mandate, “We connect people with Toronto’s heritage. We have done so for 70 years. With this digital tour, we reach beyond those who participate in our onsite programs, and deepen our public engagement by providing an immersive and free experience.”

Dundas + Carlaw: Made in Toronto is the culmination of a two-year project that began with the development of ten new information plaques mounted in what’s now called a Heritage Plaque District. It’s all part of a local community initiative, championed by Councillor Paula Fletcher with the support of Toronto City Council, to bring greater awareness about the neighbourhood’s largely unknown past. (Using that criteria, one can imagine many, many more digital tours being created.) 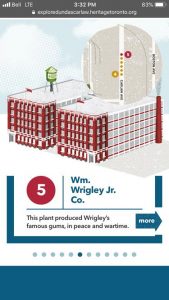 The Wrigley chewing gum maker had a huge plant in Toronto (it is one of the stops on the new digital tour).

This first tour integrates archival images, never-before-seen video clips and first-hand spoken or written accounts of daily life in the ‘hood. Workers at Rolph-Clark-Stone, the famous graphic design firm of the 1950s, share their memories, as do folks from the Reliable Toy Co., an innovative company that made some of the first plastic toys in Canada.

Wm. Wrigley Jr. Co., the famous American chewing gum maker, had a huge plant in the area (it is one of the stops on the new digital tour). Known for great gum like Wrigley’s and Spearmint, the company was also widely recognized for its effective ‘stickhandling’ of major marketing and advertising campaigns. 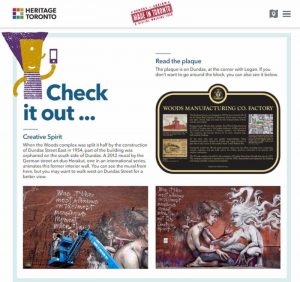 Although you can take the tour from the comfort of your desktop, the mobile downloadable version obviously lets you walk the walk. As a friendly safety reminder, users are told to watch where they are going and to take heed of vehicular traffic and other possible urban impediments.

As mentioned, the new digital walking tour is the result of a two-year project to enhance heritage awareness in the neighbourhood. Heritage Toronto staff worked with partners at Toronto-based OVE and Pear Interactive to develop and deliver the digital tour. OVE is a digital brand company, part of the global communications firm Publicis. Pear Interactive also provides web and digital communications services from its Toronto offices.

Funding for the digital tour and other elements of the heritage project came through what’s simply called “Section 37”, a sometimes controversial part of the city’s Planning Act that makes available funding for community benefit projects. Some criticize the fund for favouring downtown wards, while others are concerned that the projects it funds may fold completely because of changes contained in the Province’s Bill 108, which directly affects municipal and heritage activities. 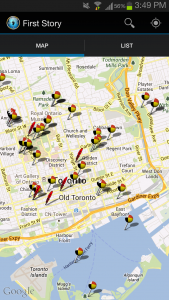 Whether folks can enjoy more new Made in Toronto digital tours or not has yet to be determined, but there are of course many other urban history apps and touring options.

One, the First Story Toronto app, actually launched almost seven years ago. Introduced at the imagineNATIVE Media & Arts Festival, the app has had a significant number of archival photographs, documents, audio and video clips added to it since then, and the project is ongoing.

Available for iOS and Android digital devices, the app maps the city’s Indigenous heritage and community, one that is significantly older than that of Leslieville.

The GPSmyCity: Walks in 1K+ Cities app includes Toronto as one of nearly a thousand global cities it covers. The app turns a mobile device into a personal tour guide and its built-in GPS navigation capabilities steer users from one stop to next on curated tours that look at history, culture, eating, shopping and more in the urban environment.

The GPSmyCity: Walks in 1K+ Cities app includes Toronto as one of nearly a thousand global cities it covers. The Harbourfront walking tour is shown in this screen grab.