Not to put a damper on your summer vacation plans, but…

Be aware that both U.S. and Canadian border patrol agents can search your digital devices at the border, and they can seize your device if you don’t provide a password.

And anyone who wants to travel to the States may have to give up social media usernames and previous email addresses before being allowed entry. 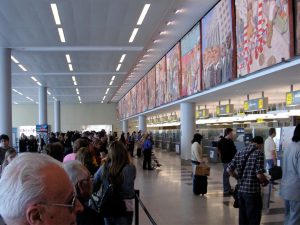 U.S. and Canadian border patrol agents can search your digital devices at the border, and they can seize your device if you don’t provide a password. JFK Airport, New York. Wikimedia Commons Image by Beatrice Murch,

In light of such requirements and restrictions, many Canadians are changing their holiday plans because of privacy concerns about crossing the border.

According to a recent survey commissioned by the Office of the Privacy Commissioner of Canada, 16 per cent of Canadians visited different destinations for that very reason – and while 16 is not a large percentage, it still represent millions of Canadians concerned about controlling their personal data and information.

(In that light then, helpful media tips and tech suggestions given to people travelling for business or pleasure to “always have a back-up battery or charger” for your device, or to “load your devices with the content you’ll need” seem, well, rather weak and incomplete.)

The Canadian Privacy Commissioner’s office advises plainly that travellers who are concerned about searches at the border (going to, or coming back) “may wish to exercise caution and either limit the devices they bring when travelling to foreign countries … or remove sensitive information from devices that could be searched.”

That’s particularly applicable to business travellers: sensitive, timely or proprietary business and product information has added value and therefore greater vulnerability. Advice to not carry any such business documentation, but rather post it to the cloud before travelling, is common nowadays.

Even for consumers, though, there are digital risks at the border.

Your latest movie download may not be sensitive information (although, in certain contexts, it could be) but records of other legal activities here could very well land you in hot water: Canadian citizens should know that, even with cannabis being legal here, a U.S. border agent could deny you entry to the U.S. if he or she has determined (say, from that e-mailed order confirmation receipt from the Ontario Cannabis Store that still sits in your inbox) that you’ve used cannabis — even completely legally.

And travellers to the States should also know that the State Department there is now requiring nearly all applicants for U.S. visas (resident or temporary) to submit their social media names, previous email addresses and phone numbers to a border agent.

Immigrant and non-immigrant visa forms have been reprinted and updated so they now request that travellers provide additional information, including “social media identifiers.” 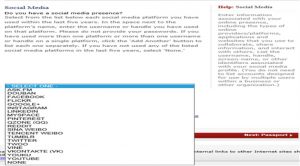 Immigrant and non-immigrant visa forms used in the U.S. have been reprinted and updated so they now request that travellers provide additional information, including “social media identifiers.”

It’s also been shown that collected social media data is shared with other federal, state and local government agencies, law enforcement organizations and even foreign states.

It’s tempting to blame all this on one country and an administration that fears invasion, but restrictive border policies that now sweep up digital devices and the data they contain are more and more common internationally and here at home.

The Canada Border Services Agency (CBSA) has long had the power to examine goods imported by travellers and returning residents.

As it happens, the word “goods” has been determined to include “any document in any form”. So CBSA officers can check your backpack, your suitcase, your purse or your electronic device (like computers, smartphones, USB keys, digital tablets and the like). They can also look at any electronic document there, including emails, attachments, photographs, contact lists, texts and voicemails, social media posts and instant messages.

That’s a wide net, but if travellers refuse to give up a password, CBSA officers can seize the device and send it to a tech lab for examination.

(Exams, by the way, can mean more than simply reading a file directory: some investigations involve electronic and physical searches including ion scans and hard drive disassembly.)

The CBSA has said that between November 2017 and March 2019, not quite 20,000 travellers had their digital devices examined; again, that is a small percentage of the total number of cross-border travellers, but it is enough to gain the attention of privacy commissioners, public policy and legal analysts as well as consumer advocacy groups.

OpenMedia, for example, has launched an online and ad campaign to raise awareness about digital border searches and pressure the federal government to update the rules that govern them. 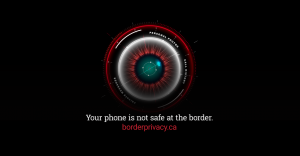 The federal government has said it is investing $24 million to create an independent review body with enhanced oversight of the border agency.

That agency and its elected political overseers will need to address big issues connected to electronic device search and seizure, perhaps even a Canadian Charter of Rights legal action over whether the Section 7 protections for the right to remain silent and against self-incrimination therein are upheld.

The notion, too, that protecting the public or the state from “goods” determined to be dangerous by searching individual handheld devices and not unplugging the Internet as a whole seems very limited and ineffective, much less personally invasive.

So, while most travellers aren’t likely to be pulled aside or have their digital device confiscated, the fact remains that there’s little you can do if a border guard asks for your social media passwords or demands a digital device search.

But have a nice trip!