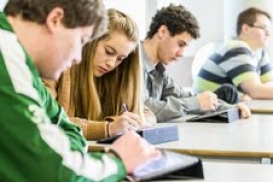 For homework help, it quickly clarified, yet the mental ripples left by the notion of not needing parents are still hard to shake.

True, we’re seemingly surrounded by digital devices that today are almost always described as smart. From the doorbell on the home in which we live to the city in which our home is located, smart stuff is everywhere these days.

Smart people, well, maybe not so much.

Admittedly, a superficial Internet search may not be the smartest way to conduct a survey.

In order to assess how important a role parents have in a child’s education, and where technology may fit in the role, the multinational technology company Lenovo recently surveyed more than 15,000 people around the world.

The survey probed respondents on how they view the role of technology in their lives and in society, both today and in the future.

Among the results shared under that eye-catching press release headline: three-quarters of parents say their kids are more likely to look something up online than ask them for help when it comes to a question about schoolwork. Sixty percent said they themselves had looked something up on the Internet and then pretended to have known the answer when helping out their kid with homework. This was most common with STEM subjects like math (45 percent) and science (38 percent), but also more elective subjects such as geography (36 percent) and foreign languages (35 percent).

Overall, it is not surprising that most parents (84 percent) responding to the survey believe that technology is helping not only their children to become more independent learners, but it’s also helping parents balance their work, home and parenting duties more effectively. 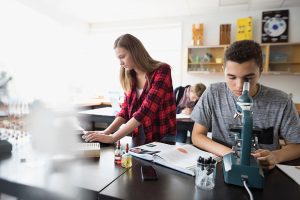 Most parents believe that technology is not only helping their children be more independent learners, it’s also helping parents balance their work, home and parenting duties more effectively. Supplied image from Lenovo.

There are interesting regional or geographic differences in that almost universal response: the countries where beliefs in technology’s helping hand was most prevalent were India (89 percent) and China (85 percent), where technology use and growth is rising exponentially. The least amount of satisfaction and conviction about tech benefits was reported in Germany, at 54 percent, where according to the Lenovo survey, people are reported to be more wary about tech in general, especially in the classroom.

The survey did uncover and describe some uncertainly and concern about kid’s use of technology — or is that overuse — wherever it may occur:

Agreeing that technology has many positives in aiding learning (such as through the use of high-speed Internet, automated translation tools and accessibility features), 72 percent of parents still said they have concerns that tech use can create dependencies in young people, potentially affecting social skills, education abilities, skills training and more.

Even setting technology aside, the role of parents in education has long been studied, of course, and generally, the role parents can play in their child’s education is seen as a positive one:

Studies conducted over the past twenty years or so, as technology’s impact has steadily grown, do show that parental involvement in a child’s early education has consistently shown a positive impact on academic performance. Students whose parents are more involved in their education have higher levels of academic performance comparatively than children whose parents are less involved. Simply put, students do better in school when their parent or guardian is involved. 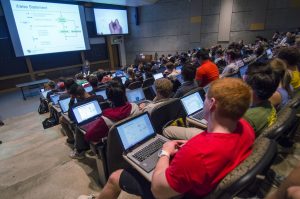 Students find seats in the aisles or stand in the entry way to the large Math 100 classroom housing the Computer Science 1300 class. (Photo by Glenn Asakawa/University of Colorado) “CompSci_class2GA” by cuboulder is licensed under CC0 1.0 .

Ontario’s education ministry is another believer in the important role parents play in a child’s education: in its Parents Engagement Strategy, the ministry states “good schools are even better when parents are involved and engaged. By engaging more parents in their children’s education, their children will achieve more and we will boost confidence and pride in public education in Ontario.”

Not everyone is convinced, however. While some parents may be supportive and encouraging of their child’s education, others can be obsessive and helicoptering, with subsequent negative impacts.

In an opinion piece for The New York Times, the authors of the new book The Broken Compass: Parental Involvement with Children’s Education wrote that “most forms of parental involvement, like observing a child’s class, contacting a school about a child’s behavior, helping to decide a child’s high school courses, or helping a child with homework, do not improve student achievement. In some cases, they actually hinder it.”

Keith Robinson and Angel Harris are not speaking about technology directly, more about the parent’s style, voice and attitude: “Do our findings suggest that parents are not important for children’s academic success? Our answer is no. We believe that parents are critical for how well children perform in school, just not in the conventional ways that our society has been promoting. The essential ingredient is for parents to communicate the value of schooling, a message that parents should be sending early in their children’s lives and that needs to be reinforced over time.”

Their balanced summation is echoed by those drawing conclusions out of the Lenovo report, including the company’s Vice President of User and Customer Experience, Dilip Bhatia, who described the findings in the release:

“As with everything, it is important to strike the right balance on and offline, but technology can be a uniting force for families. It is also important to remember that some parents are better equipped to offer children answers on educational subjects than others, especially in different regions across the world.”

Some parents are better equipped than others, sure; some students are better equipped, too: technology is only a universal benefit when everyone has access to the same technology. Individual devices, school or institutional infrastructure, local and regional networking speeds, even media experience and digital literacy must be balanced for all student to receive a balanced education nowadays.

Lenovo’s survey and analysis does show that getting more access to more sources of information is very valuable for a student’s successful education: technology certainly empowers such access and when used responsibly can contribute enormously to the education of us all.

When used properly, people can contribute too!. Each person is a potential new source of perspective and information.

Laptop vs. Tablet vs. E-Reader: What’s Best For Students?