From the outside, the views are awe-inspiring and eye-popping. 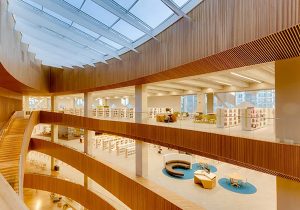 On the inside, the views are of high-tech and highly connected library spaces: comfortable reading rooms, techno-enabled conference centres and training facilities, advanced media production studios and dynamic learning spaces are sprinkled throughout the new 240,000 sq. ft. building in downtown Calgary.

It opened November 1 last year, and the Central Library has already become something of a gathering place for the city as well as being the anchor for the second most used library system in Canada, one with some 20 other branch locations.

There’s also a new CEO at the Calgary Library: Mark Asberg. Having been with the system for more than five years as Director of Service Delivery, Asberg and the new Central Library location are building blocks in an expanded vision for the city’s library services, one that seeks to not only build and boost library participation, not only to engage and connect with different cultures and communities, but also to support sustainable growth in the local economy. 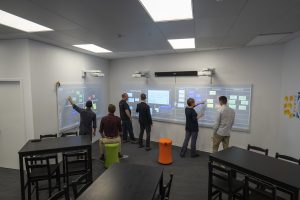 For example, one of the library’s tenants is an employment and skills development group that is providing tech training for people looking to transition into a high-tech career. On the third floor of the new library, a not-for-profit organization called EvolveU is delivering courses such as back-end and front-end IT development work for budding full stack developers.

The six-month program can cost upwards of $10,000, reports indicate, with available subsidies from provincial and federal governments making some students eligible for a fully subsidized tuition (there a free introductory programs offered at other branches).

InceptionU is also operating at the new Library; it’s a tech education start-up that uses and administers a sophisticated collaboration space there known as the Nureva Design Studio where training, meetings, project planning, business conferences and team-building activities take place. Nureva is a Calgary-based company run by Nancy Knowlton and David Martin; the pair founded an edutech company called SMART Technologies several years ago; Nureva has since grown and developed into a global firm providing technology and related services to a wide range of industries from its facilities in Calgary and Ottawa. 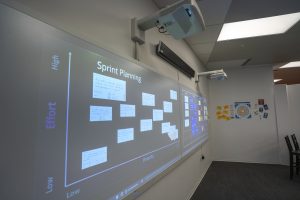 “We are thrilled to play an active role in creating the Nureva Design Studio with InceptionU and contributing to Calgary’s innovation ecosystem,” said Nancy Knowlton, now Nureva’s CEO. “We have seen organizations around the world use our solutions to become more agile, accelerate their processes and enable creativity in countless ways, and we can’t wait to see what amazing new ideas are born at this studio.”

It is uniquely outfitted with a suite of real-time audio and visual collaboration tools, including interactive white boards and touchscreen walls, audio conferencing systems and cloud-enabled information processing, storage and retrieval. 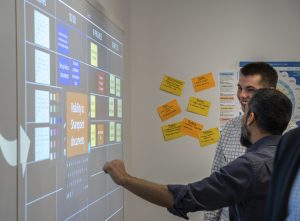 The Nureva Wall is a cloud-connected canvas on which participants can work with huge amounts of data as well as a number of co-workers scattered around the world. Image: Nureva.

Business groups that use the Nureva Span Workspace facility for product planning or project management, for example, can work together on giant interactive walls that turn old-fashioned sticky-note processes into real-time data tracking and visual mapping tools.

The Nureva Wall (a nearly seven-metre-wide interactive surface space) in the Calgary Library is a cloud-connected canvas on which participants can work with huge amounts of data as well as a number of co-workers scattered around the world. Just recently, the Wall has been integrated with a popular project management tool called JIRA, so bringing added real-world functionality to the interactive environment. The system is hosted on a Microsoft Azure platform, so security concerns can be addressed with Azure’s data encryption, SSO integration and related security and privacy accreditation. 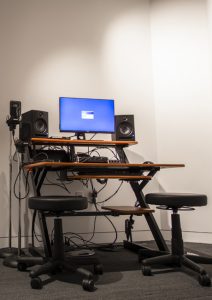 Digital and multimedia production spaces can be booked for free by resident cardholders; an audio studio workstation is pictured. Image: Calgary Library System.

Digital and multimedia production spaces can be booked for free by resident cardholders; there’s a professionally outfitted audio facility with mics, recorders and audio software tools; a 4K- capable video studio with a green screen for special effects, not to mention a post-production and editing studio.

Among the Calgary Central Library’s other tech-enabled facilities and features are a Digital Commons space with its open studio concept, a creative resource known as the Idea Lab and a Tech Connect communications hub.

As such, it is not hard to see why this beautiful and remarkable example of how valuable a public space can be is an award winner and honoured finalist in the 2019 Innovation by Design Awards in the Spaces, Places, and Cities category.

And that’s without even mentioning books! 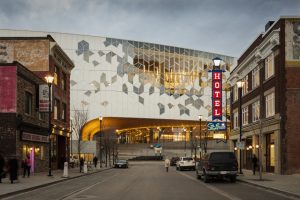